Katie Taylor, undisputed champion the world. What better person to headline the final Late Late Show of the season. Katie's appearance with Ryan Tubridy tonight was a celebration of the Bray woman. She literally began the interview by being brought, somewhat painfully, through the meaning and story behind each of her five world championship belts.

In what was very much a life and times interview that charted Katie's rise and rise, much of the time with stories we've heard before, including her fighting as a boy at an early stage of her amateur career.

"You just can't be driven by anything other than passion and purpose" 🇮🇪@KatieTaylor tells Ryan about having to fight while pretending to be a boy when she was younger!

However, the 2016 portion of the interview struck a particular chord.

For an athlete that has known little more than success from her youngest days to this very day, she sometimes speaks most eloquently about her one failure - not retaining her Olympic title in Rio five years ago. As Katie, mentions, much of what happened in terms of the breakup with her father in the buildup to the Games has been well documented as this stage, but the details of just how difficult her buildup that year was was quite intense.

I guess I would describe the whole year as being turmoil. A lot turmoil within family relationships.

It's no secret that myself and my dad had parted ways that year.

My whole training regime was turned upside down. I was going from club to club, just trying to get a few spars here and there. I was in and out of the Irish boxing team, sleeping in my car between sessions. I wasn't eating properly. My preparation mentally and physically was all over the place.

But I still went in to the competition as the hot favourite and still believed I could win gold.

When things down pan out the way you hoped and dreamed, you really can't underestimate how heartbreaking that is for an athlete with my mentality.

Winning is everything. That was easily the lowest point of my career.

When asked  by Tubridy why she was sleeping in the car, Taylor wasn't as clear, and in the end, described it as something "I decided that I wanted to do."

Yeah I was sleeping in the car inbetween sessions with the Irish boxing team.

The Irish team were staying in a hotel but I didn't want to travel back that far from the training centre to the actual hotel.

It was just one thing that I decided that I wanted to do.

It's hard to fathom what the boxer was going through at that time trying to keep things together for the biggest event of her life. While she didn't medal in Rio, she has certainly bounced back since. Her 18-0  record as a pro has made her an undisputed world champion and the undoubted face of women's professional boxing, in much the same way she led the way in the amateur game.

The reaction to Katie's appearance, where she also spoke about fighting in Ireland ("out of my control"), being her own biggest critic, and much more was naturally overwhelmingly positive.

An absolutely brilliant contribution from @KatieTaylor on the @RTELateLateShow right now. An Irish legend and an icon. ❤🥊🇮🇪 pic.twitter.com/LrOmaOr6sN

“Hearing you’re a sure thing is the worst thing an athlete can hear, there’s no such thing in sport” just amazing to hear how she fought despite carrying such weight and expectations @KatieTaylor #LateLate @TeamIreland pic.twitter.com/WscEllacmS

What a beautiful person @KatieTaylor You are a true inspiration to us all, we are so proud of your achievements @RyanTubridyShow #legend #katietaylor pic.twitter.com/h2KMagp48o

@KatieTaylor spoke very well on @RTELateLateShow,
a classy, talented, humble lady.
A role model for all athletes in Ireland

SEE ALSO: Everyone Was Baffled By Sky Sports Commentary During Katie Taylor Win 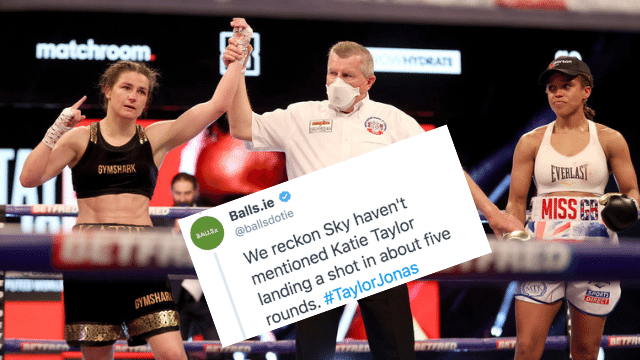