100-90. 100-90. 100-90. So read the judges scorecards after Katie Taylor's dismantling of Cindy Serrano in the TD Garden in Boston this morning. Not only did the Bray woman win every round, but "every second of every round".

Champ @KatieTaylor has won "every second of every round" says @PaulMalignaggi and have to agree, dominant display there. Cindy Serrano should get a cut of sister Amanda's purse for setting up that promotion

It's not 11 wins from 11 for Katie as a professional, and this was one of most assured performances yet. Serrano's defensive style made a knockout next to impossible so Katie methodically took apart her opponent.

Serrano's defensive style definitely frustrated Taylor, and in the seventh round, she even stopped boxing, tauting her opponent to come forward and actually fight back. 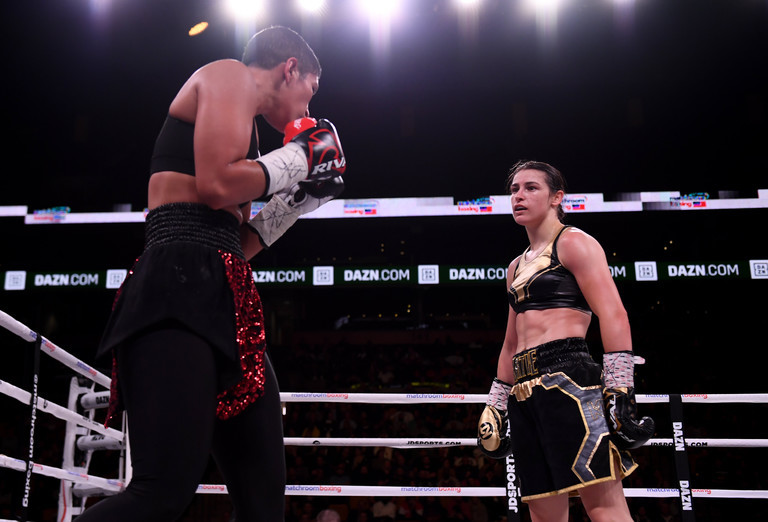 The 36 year old Puerto Rican had been unbeaten in six years but in truth showed little ambition to take Katie Taylor's IBF and WBA lightweight titles. In truth, she did little to make Katie's 1/25 odds not seem generous.

Though one sided, Taylor's performance thrilled the 8000 fans in the Boston Garden and her antics in the 7th showed there's a bit of the showwoman ready to come out of the 32 year old.

Taylor is likely to fight again in December either in New York or London, as she continues her journey towards unifying the lightweight titles.

One potential opponent in Serrano's sister Amanda who made the case for a much better and competitive fight on Twitter.

Congrats to @KatieTaylor for her win tonight against my sister Cindy. I Hope I get my shot I Promise it will be a Toe 2 Toe WAR! I’m Not moving nowhere! I think it will be 1 of the Biggest Female fights aside from @Claressashields vs Hammer. @loudibella Please Make It 🙏 pic.twitter.com/G2gHe1x0Xz

Elsewhere in Boston, there was disappointment for Belfast's James Tennyson who was stopped in the fifth round by the classy Tevin Farmer, who retained his IBF Super Featherweight world title.