A fantastic clip has emerged from Saturday in Las Vegas, before Canelo Alvarez’ light-heavyweight word title fight with Dmitry Bivol.

The moment he gets to meet Katie Taylor may have been the best part of what was a disappointing night for the pound for pound champion as he ended up losing on points in only the second defeat of his career.

There was an overwhelming amount of boxing greatness in the room as Canelo was having his hands taped up. Both Katie Taylor and Canelo are currently top of the Ring and Box Rec pound for pound rankings.

At the beginning of the we can hear Eddie Hearn telling Taylor that Canelo had asked to see her, with Taylor replying “oh my god, I’m actually nervous.”

Both fighters appeared to be humbled by each other’s presence as they exchanged congratulatory words.

Katie Taylor: Hello how are you?

Katie Taylor: Thank you so much.

The conversation continued for a short while with Canelo in a jovial mood asking Taylor how she felt after the fight. Unfortunately for the Mexican, just hours later he would be staring defeat in the face, with just his second loss as a professional after he was beaten in 2013 by Floyd Mayweather Jr.

Both Alvarez and Taylor will likely face rematches with their respective opponents, with neither fighter giving up the pursuit of further greatness just yet.

There are murmurs of a rematch between Taylor and Serrano in Croke Park, but logistics may get in the way of a potential homecoming bout. 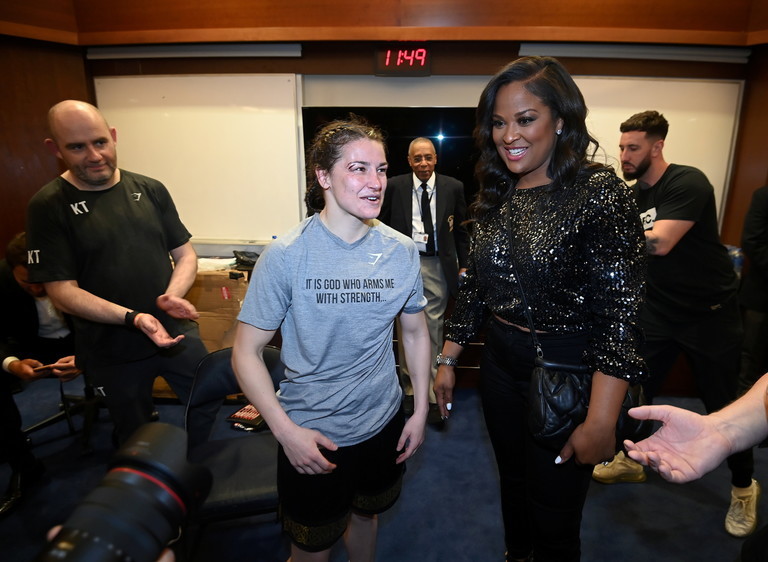