'I Think Those Remarks Are A Disgrace Really'

The barbs have continued long after the bell and Katie Taylor is starting to get sick of it. Delfine Persoon is adamant her recent close loss was the wrong call and she has proceeded to make that known in no uncertain terms.

"She doesn't have the guts to come to Belgium," the 34-year-old declared in an interview with the Irish Independent as she called for an immediate re-match with the Irish lightweight. Elsewhere, she expressed the view she had been 'robbed' and said "I wouldn’t want to be like her. Winning that way..." 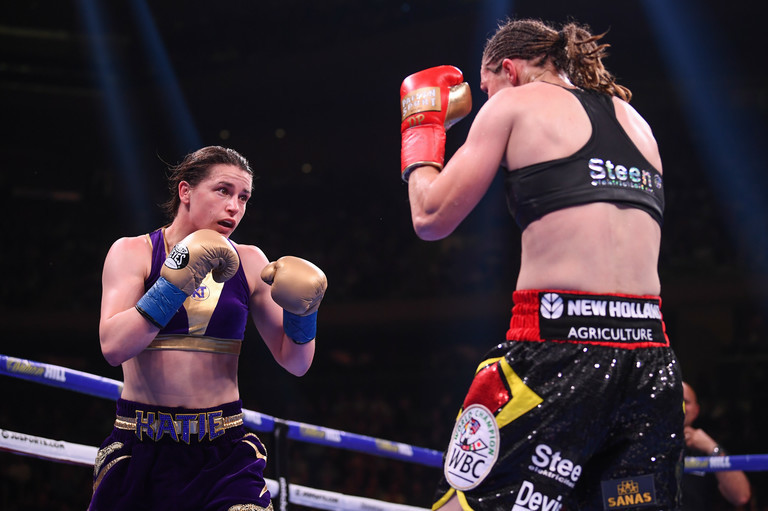 The Madison Square Garden contest finished 96-94, 96-94, 95-95 in favour of the Bray fighter and speaking at a special screening of Katie, the Ross Whitaker directed documentary on her career, she explained that she feels the result was correct.

It was a very, very close fight and I came out as the undisputed champion and I felt like it was well deserved. It was a very, very tight fight of course. It was a tough battle regardless of whether people thought I won or she won. Everyone can agree that it was an absolute battle.

I don’t think you can call tough fights like that 'robberies’ or battles (like that) ‘disgraceful decisions’. Those remarks are a disgrace in themselves really.

Taylor has an October date for her next bout but the opponent will not be Persoon. That rematch is on the cards, but so is a host of other prospects including UFC star Holly Holm as well as a possible move up to superlightweight where a previous opponent, Jessica McCaskill, is on the verge of becoming the undisputed champion.

"That rematch is going to be inevitable that’s for sure. At the same time, I would love to move up a weight and maybe become a multiple weight undisputed champion. That’s history-making right there."

Katie Taylor was at an exclusive Sky VIP event at The Lighthouse Cinema. Sky customers can join Sky VIP for free by downloading the My Sky app where they can enjoy money-can't-buy experiences and more.

Boxing
5 months ago
By Maurice Brosnan
'The Fights Are Going To Happen. Eventually, I Am Going To Shut Them Up'
20

Football
15 hours ago
By Michael McCarthy
Confirmed: Mick McCarthy Is Gone, Stephen Kenny Is The Republic Of Ireland Manager
116