This weekend's rematch between Katie Taylor and Delfine Persoon will most definitely be different in one way from the original bout, the Irish fighter hopes she can also makes changes in another.

Last summer, Taylor and the Belgian fought at Madison Square Garden. Their second meeting takes place in another garden: the one out the back of Matchroom HQ in Essex. That's where, amid the flower beds, promoter Eddie Hearn as been staging fight nights in recent weeks as Covid-19 continues to prevent a return to normality.

Taylor's amateur boxing background, which saw her win major fights in virtually empty venues, sets her up well for Saturday.

"For me, it's not going to make any difference motivation-wise," she said via a video conference call on Tuesday.

The Bray boxer defeated Persoon by majority decision last year to become undisputed lightweight champion. It was, in the eyes of some, a controversial victory for Taylor. Persoon thought she'd won and was aggrieved that the judges had given Taylor the nod.

Hearn - who was about to take part in a charity fishing tournament - phoned into to Tuesday's press conference saying that the first fight was "probably the best fight I've ever seen".

For Taylor, it was "a bit too exciting". Another toe-to-toe, all out war would favour Persoon. 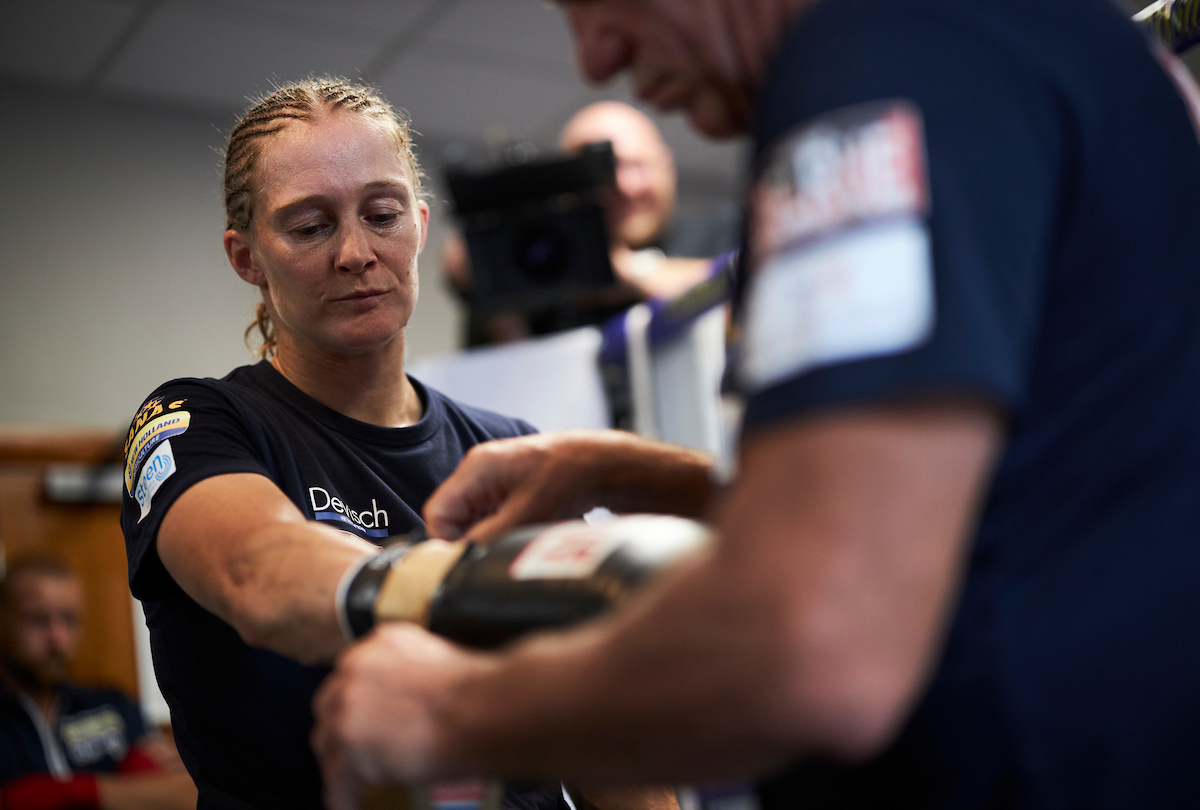 Last week, the 35-year-old Persoon said that her opponent was only the "paper champion" and that she was the "people's champion".

"I'm a composed person and I don't take too much notice of what people are saying, for the most part," said Taylor regarding those comments.

Regardless of what Delfine, or anyone else says, I am sitting here as the undisputed champion and no one can take that away from me.

I am always a quiet person and always am quiet in the lead-up to these fights. I don't feel the need to bite back or shout back - I'll do my talking in the ring.

And it is in the ring that Taylor will look to make that other change from the original fight. She wants to remove any doubt about who is the real champion.

"I am in this sport to be involved in the biggest fights possible and to be in the fights that people want to see," said Taylor.

"I knew all along that this fight was going to be inevitable.

"When Serrano pulled out of the fight and Persoon was available, we were delighted with that because it's the biggest fight possible for me right now.

"If I'd fought anyone else, everyone would have been talking about the Persoon rematch anyway. I wanted to get this fight out of the way, put it behind me and just move on.

"I guess I have a bee in my bonnet about every single fight. I want to win every fight convincingly and never leave any question marks.

"I probably enjoy a fight a bit too much. It's probably one of the most enjoyable parts of boxing, actually standing there and fighting. I have to be a bit more disciplined this time around.

Boxing
9 months ago
By Balls Team
'She Deserves To Win' - Persoon Has No Problem With Taylor Victory
Boxing
10 months ago
By PJ Browne
'I Was Grateful He Made Time For Me. It Was A Stay Sharp Thing'
Boxing
11 months ago
By Sean Meehan
Katie Taylor Set To Take On Delfine Persoon In Rematch Of 2019 Classic
Previous Next

Boxing
9 months ago
By Balls Team
'She Deserves To Win' - Persoon Has No Problem With Taylor Victory
Boxing
10 months ago
By PJ Browne
'I Was Grateful He Made Time For Me. It Was A Stay Sharp Thing'
Boxing
11 months ago
By Sean Meehan
Katie Taylor Set To Take On Delfine Persoon In Rematch Of 2019 Classic
Popular on Balls
Football
16 hours ago
By Gary Connaughton
Manchester United Legend Urges Club To Avoid Delcan Rice Transfer This Summer
Football
17 hours ago
By Gary Connaughton
Scotland's Stephen O'Donnell Used Some Strange Methods To Put Jack Grealish Off His Game
Athletics
19 hours ago
By PJ Browne
The Men's 800m At Kenya's Olympic Trials Was Wild