It was a childhood spent boxing with a hairnet so that she could conceal her ponytail underneath her helmet and compete against boys under the name 'K Taylor.' The inexorable conclusion was a global conquest of the paid ranks. That dream could soon become a reality as the title of undisputed champion beckons.

The journey started in Bray. It would go on to touch the past, present and future of women's boxing.

Before Katie, before anyone, Deirdre Gogarty was the trailblazer. Her fighting career was based in the United States because Ireland did not permit women's boxing. Gogarty was the internationally recognised world champion who couldn't fight in her own home. 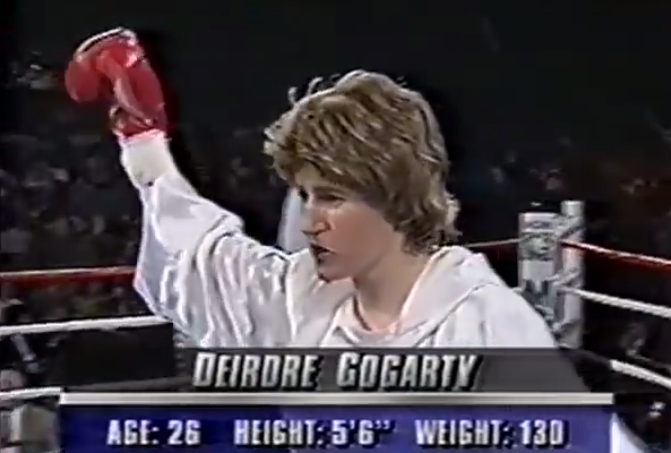 It was during a brief return to Ireland that she got a visitor. The doorbell rang, advice was sought. A trainer and coach, father and daughter, made the hour-long trip from Bray to Drogheda in search of reassurance.

"She was struggling to fight in Ireland, very similar to me. She was just so frustrated about it. So she came to see me," Gogarty tells Balls.ie. "We sat down and talked, she was working hard in the gym and watching the boys box. She wanted to figure out how to make it work.

"I just told you never know when the opportunity will come. You will get a chance to prove yourself worthy of being in a boxing ring. There was a lot of scepticism back then that women couldn’t even box. A fear that we’d embarrass the sport. You have to be as skilful as possible to show you are worthy of being in the sport."

Every excuse in the book came Gogarty's way to deny her a license in Ireland. From aptitude to breast cancer, their reasons grew weaker, while their resolve remained robust.

The Mornington women would go on to contest what was widely considered to be the female version of the 'Thrilla in Manila'. On the undercard of Mike Tyson v Frank Bruno II, Gogarty took on Christy Martin in an almighty six-rounder that sent boxing fans of all creed into delirium.

As she reminisces on that night, there is no mistaking the sense of pride in her voice. It was an Irish person putting their sport on the map and it's a mantle Taylor would later pick up.

When I fought Christy Martin, the only thing on my mind was Christy Martin. I’d no idea of the impact it would have around the world in terms of what it’d do for women’s boxing. Loads of people finally realised ‘women can fight!’ In the moment, I never thought about any of that.

It brought excitement and entertainment to the sport, real validation.

Recent Taylor showings have brought a longing to deliver a performance as well as a result. This comes as no surprise to Gogarty. The sport is still developing and thus there is an onus on the chosen few to put on a proper showcase when given the opportunity. It's a responsibility the first Irish female champion and the current famous one share.

"If you're not exciting they won’t come to see you. You can’t go in and pitty-patty around. I had a really high expectation of myself. I know obviously Katie is the same way.

"She continually studies the craft. It is hard to see many that I've seen touching her skill level."

Christina McMahon was Ireland’s fourth ever female pro and the first in ten years when she debuted back in 2010. It was a career that took her to America, Mexico and Zambia, ultimately reaching a remarkable WBC interim bantamweight title. 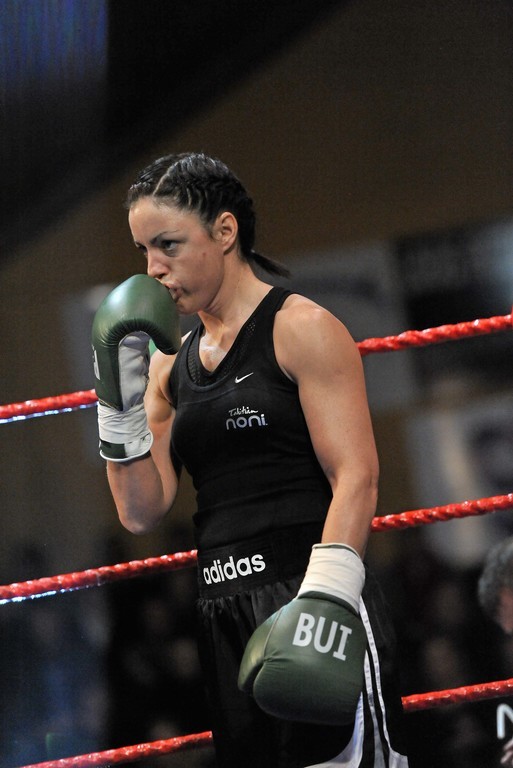 The Monaghan woman knows all about hardship. There were numerous setbacks and suspensions along the way, but adversity is par for the course in this sport. It's one of the first things she cites about Taylor, her ability to overcome it.

She was driven from an early age. I trained at Bray for two years when Katie wasn't on the map. Her Dad used to talk to me about women's boxing and its place. For all her ambition and drive, he became the driver. He stood up to the big boys and pushed back when they were trying to drive the sport. It wasn't just one woman doing it, it was a family.

The public deterioration of that relationship threatened to unsettle Taylor's career. Boxing, more than any other sport, is a lone pursuit. That reality came crashing down in 2016. 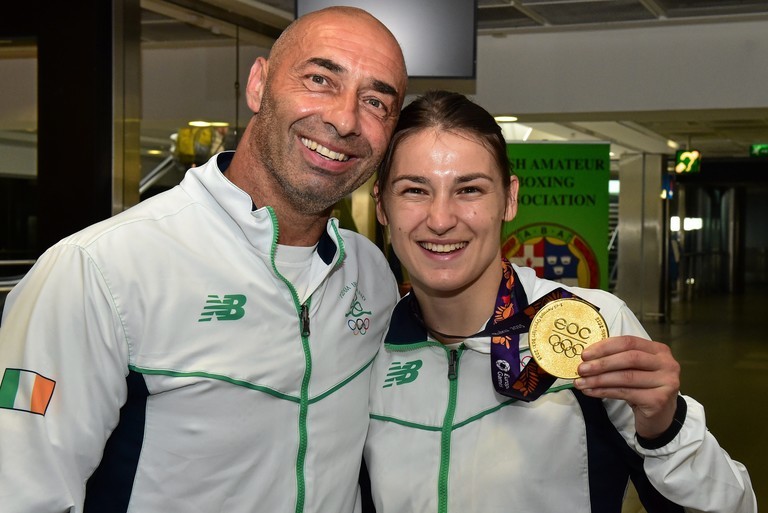 The limelight rarely reached McMahon and she is okay with that. It's the only certainty when you pursue a nice sport. 'If that's your reason for entering it, you're done for.'

What’s important is that other women can look and say Katie Taylor is a world champion. That's great. She did that for herself. We can appreciate her journey, but it's her journey.

That's human nature. I won a world title and it affected nobody. The fact is it’s about yourself.

Her sole hope is that all the success is used to generate momentum. In South Africa and Mexico, McMahon topped bills. Male and female boxers were viewed through the same prism, discussed in similar ways. The same cannot be said of this isle, and more hometown demonstrations would undoubtedly help. This will be Katie Taylor's 13th fight. She's yet to register a single showing in Ireland.

"Unless there is a team getting together and pumping this, they are leaving it too long to generate that. If she wins and comes home, you’d hope everyone will give her a hero's welcome."

Above all else, Katie Taylor is doing it for herself. It's a powerful feeling. That single motivation, that individual drive, it lingers still in Christina McMahon. As the conversation wears on, she slowly convinces herself. A return is imminent.

I feel proud because I didn’t need a big team, big support or a whole load of money. I still achieved what I wanted. I did it without money, a broke champion. At the end of the day, I look over at that belt and no one can take it away from me.

I haven’t said this before, but I’m looking at fighting again. I’ve only discussed it with my husband.

I’m looking at my trophies on my shelf as I speak to you. I see stories. There is a lovely road behind every trophy. Another one means nothing, but if I fight again I know I’ll hear people say 'you're too old.' It's what I want to do. It’s about the journey, isn’t it? I went on a journey with my husband and by God I came away with a pro world title, everything I put into the ring in boxing I won myself.

So that's it. I’m contemplating fighting again, I'm 45 in the summer and three years out of the rings, my last world title was a controversial loss. I think I’m going to go again. Other people can say whatever.

We have a short life.

Amy Broadhurst's most recent birthday was an extraordinary one. Last March, she celebrated it by winning gold at the Under-22 European Championships in Russia. It marked her fifth European gold medal. 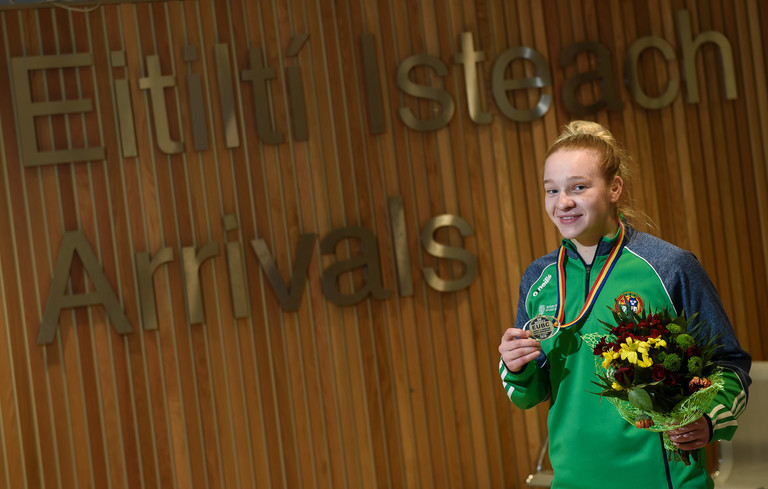 In April 2018 she became the only female besides Katie Taylor to win four European golds. The first person to reach out and congratulate her was Ireland's previous queen of the amateurs. It was a particularly poignant message, given Broadhurst's early adoration for Taylor.

"I still remember when I was about 8 years old. I asked could I get a pair of Katie Taylor boxing boots for Christmas. They ended up getting me the same pair she wore," she recalls, the delight still evident.

For Broadhurst, admiration does not equate to imitation and nor should it. The Taylor template is in following footsteps, not fists: "As a boxer, especially an amateur, You can't look at somebody and try to copy them. You need to focus on yourself and do you, what makes you special."

It's not just about what she does, it's how she does it.

To watch a female dominate the sport as well... For me, she is such a big inspiration.

I think in both amateur and professional she is still head and shoulders above most boxers. She boxes like a fella', that’s rare to find in women’s boxing. She boxes like a man, I mean that in a good way. That’s a compliment. Actually, for me, that’s the best thing.

When asked what makes Taylor great, all three Irishwomen had a different answer.

"Her heart," said McMahon. "It's important for me, for the women of Ireland, and for boxing. A fairytale story."

It's likely a combination of all three that has Katie Taylor spearheading the sport's continued growth. The fourth crown is merely the ultimate tribute to a career less ordinary. And yet, her real legacy is what she has done for those who came before and after her.

A bar set higher again, a bodacious and boundless testament to the power of dreams.