"Is he here?" Katie Taylor jokes with a quick glance over her shoulder, the fleet-footed lightweight uncertain if she has successfully rid herself of dogged Minister for Sport Shane Ross. The TD went toe-to-toe and stride for stride with Taylor as he accompanied her into Dublin Airport for her homecoming earlier this week.

It's less than a week since Taylor became undisputed world champion and the delight is still evident as she sits down to reflect on it. She perches in front of all five belts and remains lighthearted throughout. The recent days spent alongside family and friends have only enhanced the celebrations.

"The support when she came back was fantastic," acknowledges her manager, Brian Peters, before pondering the nature of it: "Was it for Shane Ross or for you?"

As for the recent festivities, Taylor is delighted to have triumphed in a tough fight and elated to be back in Ireland.

The reaction was absolutely brilliant. Just being in my own house really. I haven't been home properly over the last six months. It has been such a busy few months with the Rose Volante fight.

I was only home for a week after that fight before I went straight back over to start training camp for this fight. Just happy to be home and eating what I want over the next few weeks!

Two years, six months, six days. That's how long it took Katie Taylor to conquer the paid ranks and become undisputed world champion. A remarkable journey but not a completed one. There remain unprecedented heights to reach and trails to blaze. 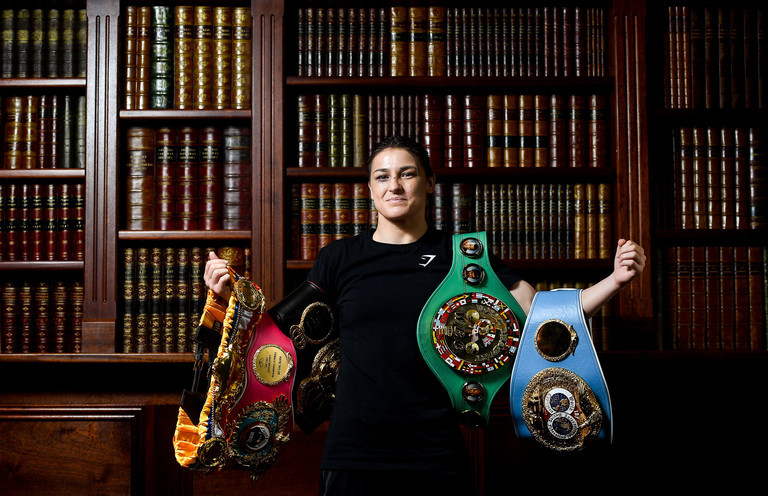 The holder of the WBA, IBF, WBO and WBC belts, as well as Ring Magazine’s commemorative “ring belt”. The first woman from the UK or Ireland to headline an event in a world title defence, the first women to headline a Sky Sports broadcast.

Yet there are bigger and better things on the horizon.

I didn’t know how this would go when I did turn pro. I remember sitting with Eddie Hearn and Brian less than three years ago and we were saying we didn’t know how people were going to perceive women’s boxing. Just seeing how far it has come the last few years is incredible.

I’m in a position now where I feel like I can headline a show in Madison Square Garden, which is phenomenal.

SEE ALSO: 'I Am Not Really Concerned About What Other People Are Saying'