Irish Olympic gold medalist Kellie Harrington has confirmed that she will stay in the amateur ranks despite her heroics in Tokyo last month.

Harrington's future in amateur boxing has been the subject of much talk since returning home from Tokyo.

But she has put an end to that speculation by deciding to remain in the amateur game during a slightly surreal interview on the Late Late Show last night.

"I've made the decision, I'm going to stay amateur," Harrington told Ryan Tubridy from the back of a car. "It's not always about money."

Wise words from Olympic hero Kellie Harrington on why she won’t be turning pro. (Whilst getting a lift from Ryan and managing to keep a straight face 😂) #LateLate | @Kelly64kg pic.twitter.com/7ozMejgPSi

Harrington has received offers to join the professional ranks since winning gold in Tokyo.

But not even the lure of professional sport could make her leave amateur boxing, an arena where she has had unprecedented success.

"I'm very happy. I'm supported by Team Ireland and I have a great team with the set-up.

As recently as last month, Harrington explained that she has no interest in seeking the fame or money that comes with success.

So, perhaps it is no surprise that she has opted to stay in the amateur ranks.

"I'm not a fame-hogger or anything like that. That's not me. What is fame? I'm all about humility," she said.

"You can be famous and you know what. But my people are in my community and that's what means the most to me."

Going forward, her decision to stay means that she has yet another chance to win Olympic gold in Paris in 2024.

And that can only be a good thing going forward for Team Ireland and her hopes of more Olympic success. 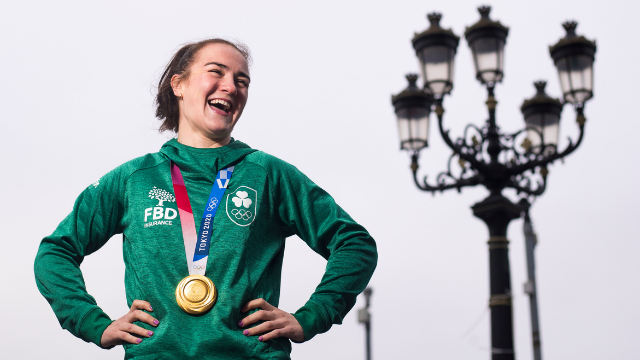 Olympics
5 months ago
By John Dodge
The State Of Play For Irish Olympic Sport - How Are We Fixed For Paris 2024?
Boxing
5 months ago
By Andrew Dempsey
'What Is Fame? I'm All About Humility': Sublime Kellie Harrington Touches Down In Dublin
Previous Next