'It's A Business. It'll Have To Be Worth The Money For Me To Turn Over'

Only an offer too good to refuse would tempt Kellie Harrington to make the move into professional boxing.

Harrington believes that Katie Taylor has "put women's professional boxing on the map" but her prosperity has not made the 2018 lightweight world champion more likely to enter the pro ranks.

"Her success wouldn't entice me to want and go professional," said Harrington at the launch of the European Week of Sport 2020.

"It would entice me to want to have a go alright, have a scrap, but not to go professional, unless I'm getting paid big money for it.

"It's a business. It's your job 24/7. You have no life, basically. I'm a woman and I want to have a family as well. It's easier for a man to do both. He can have a bambino and box at the same time but a woman can't do that.

"When I'm finished with the amateurs, if there's someone out there that wants to offer me a good contract, maybe a two to three-year contract, a good fight deal with plenty of money, then I'll do it.

"If I'm not getting that, I'm not doing it. It's a business. It'll have to be worth the money for me to turn over. If they do see me turning over, you'll be like, 'Jesus, she must be in the money or else she's stuck for a few bob!'" 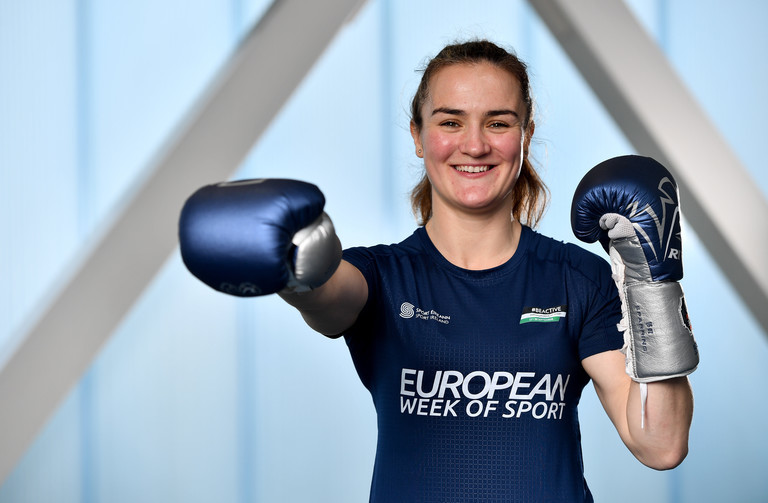 Ambassador and boxer Kellie Harrington in attendance the launch of European Week of Sport 2020, in partnership with Sport Ireland. Photo by Sam Barnes/Sportsfile

Just as it did with all other sports people, the Covid-19 pandemic sent Harrington's plans down a side road she did not see coming.

The 30-year-old was preparing for the Olympic qualifiers earlier this year when the virus hit Europe. The European qualifiers, which take place in February or March of next year, are now the big target.

There's also the matter of her right hand which Harrington injured last year.

"My hand is not back fully to the strength that it could be," she said.

In an RTÉ documentary about the delayed Tokyo Games which aired last month, Harrington said she would consider retirement if the Olympics did not go ahead next year but that is not a definite. And if she was to retire, it would be from international boxing. The Dubliner would continue continue to box nationally with the aim of winning another two or three elite titles.

Right now, she's training twice a day, once at the Institute of Sport and once at her boxing club and hopes to be allowed return to sparring soon.

European Week of Sport is a week long celebration of sport which promotes physical activity in people of all ages, background, or fitness levels. Sport Ireland are calling on you and your family to get out and #BeActive between the 23rd - 30th of September and who knows, this may be the start of a new found love for sport. Visit www.sportireland.ie/europeanweekofsport for more information.

Boxing
5 days ago
By Gary Connaughton
Gary 'Spike' O'Sullivan Eyeing Lucrative Date With Boxing Legend In 2021
Boxing
1 week ago
By Donny Mahoney
'We Make A Livelihood Out Of What We Get. We Make A Life Out Of What We Give'
The Rewind
4 weeks ago
By Balls Team
10 Actors Who Got Absolutely Ripped To Play Boxers In Films
Popular on Balls
GAA
19 hours ago
By PJ Browne
10 Counties Represented As 2020 PwC Football All-Star Nominees Revealed
1