Decade After Winning Fight For Her Life, Mary-Kate Slattery Dreams Of Turning Pro

"I didn't feel comfortable enough to push people around like I push myself," the 22-year-old told Balls at the announcement of the Irish Life Health Schools' Fitness Challenge 2018 results.

"That was something that I felt held me back but once I found combat sports, I was able to unleash. I was able to channel my energy. "

A good deed which did not go unrewarded was Slattery's route to boxing. In her first year studying law at Trinity, she, along with a friend, organised a white collar boxing night to raise funds for Crumlin Children's Hospital.

"I'd never thrown a punch before that. Basically, to sell tickets, I picked the scariest friend of mine that I have; she's not scary at all but she's feisty. I wanted people to come along and see it, almost make fun of the fact that I was throwing myself in the ring, 'cos I'm not at all a fighter.'"

It was that night, and in the build-up, that she discovered the fighter deep within.

I ended up absolutely loving the training, enjoying the discipline and how driven you have to be. It's an all-consuming sport. I loved that. I got a bit of a buzz and fought really well on the night.

Initially, Slattery kept a boot in the ring with boxfit classes. She soon met Olympic boxing hopeful Tony Browne who introduced her to his coach Steven O’Rourke.

O'Rourke did not train women at the time but agreed to give it a few weeks. "We were training full-on and I really wanted to step up and prove myself, particularly for women," says Slattery.

She got stuck in - deep. Three months after beginning to train at St. Michael's Boxing Club in Inchicore, she won her first Irish title. It was also her first amateur fight. 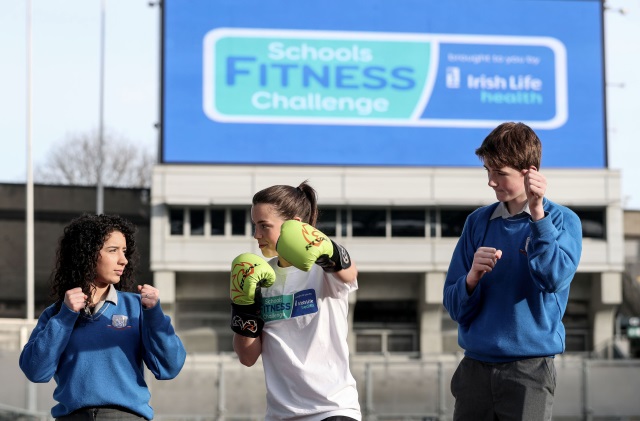 "Above skill and above fitness is just heart," she believes.

"That's the same with all sport. When you've got the heart and the will and the drive, you can do anything. I kind of take that philosophy through life as well. It's taught me so much about the way that I live: I live with so much more intention because I know the power of that.

"As I've grown in boxing, I've felt more of a spiritual connection. When you're really backed into a corner and all of your senses are going, it's a real practice in being present, in awareness. It's a meditative state that you enter because every little millisecond matters; it's survival and there something exciting about that for me."

Now in her third year studying at Trinity, Slattery knows that law is not her calling, but the boxing ring is - she wants to turn pro.

I'd love to consider the Olympics but at this moment in time, pro would be more suited to me.

Before I started boxing, I ran four marathons. I ran my first marathon when I was 16, just with my mom who gave up smoking and starting running.

Since then, rather than a sprinter, I've been an endurance athlete. Going up to 12 rounds would suit me better, rather than the three, three-minute rounds of just explosivity.

At the moment, it's just about signing the papers and relinquishing my amateur licence, getting my professional licence and finding a promoter who I believe in and who believes in me, more importantly. Then build up sponsorship and create a career for myself.

I've very much started [the process]. It's exciting at the moment. In the coming weeks, it'll become more solid. I don't want to announce anything just yet before the foundations are there.

She may not practise law but her education will not go to waste. Slattery is currently writing a book about her battle outside the ring, a process aided by the many essays she's written while pursuing her degree.

When she was nine, Slattery was diagnosed with anorexia. She was taken out of school in fourth class and spent years in and out of Crumlin Children's Hospital. While they tried to help, the expertise she needed did not exist in Ireland but it did at Great Ormond Street in London.

"It was very strict, it was like 'If you don't cooperate with the programme, you won't see your parents.' As an 11-year-old, that was pretty scary. I really had a choice: Are you going to cooperate? Are you going to live this way forever? Or, are you going to make a change here?

"There was a lightbulb moment for me after a few months in Great Ormond Street, that was the first time after four years of being in a hospital that I actually thought, 'Maybe all of these doctors are right. Maybe they have a point.'

"Before that, it was very much, 'This is so embarrassing. You're going to realise in a few weeks that you've made a mistake, that there's nothing wrong with me.'

"I really believed that. I thought they were just completely overreacting and it was just so frustrating. It was the two of us: my anorexia and me; we were on a mission and everyone else was against us.

"To be thinner [was the mission], to starve myself; to have a goal weight and once I reached that weight to have another goal weight. It was just sucking the life out of me but I would get a buzz from being thin."

Won against a tough opponent today in the semis :) Enjoyed every minute. Excited for tomorrow’s final against another great fighter. #StMicksBC

That moment of revelation, one in which she first thought that she might have a problem, was the catalyst for change. A year-and-half after checking into Great Ormond Street, Slattery was in a better place. She returned to school midway through first year. It real shock at the time but she found her way.

The root cause of her condition was trauma suffered as a child.

My aunt who was very close to us passed away very suddenly. She was sick for a long time but never told us.

I manifested a lot of darkness and it became this disease with a need for control, which is what anorexia is. I don't think you're ever a recovered anorexic, I think you're constantly recovering from it, like any addiction.

That process of continual rehabilitation is one aided by her participation in sport and also the desire to share her story.

"Ultimately, it's helping me to share my message as well. It's given me a platform to be able to talk to girls, boys - people who are struggling with mental health. I knew once I got better and how lucky I was to get the help that I needed - which not everyone does - that I had a duty to share.

"I hope that I'm able to do it justice. I'm not an expert in anorexia at all or in mental health but I am an expert in my own experience; that's the aim, to share that."

See Also: 'Far Too Many Children Are Going Through School Without Lifting A Hurl'

Boxing
1 month ago
By Shane O'Brien
Fury Vs Wilder II: What Time Is It On And Where To Watch It
10

Boxing
10 months ago
By Kevin Beirne
Who Is Delfine Persoon? All You Need To Know About Katie Taylor’s Opponent On Saturday
Previous Next

Boxing
1 month ago
By Shane O'Brien
Fury Vs Wilder II: What Time Is It On And Where To Watch It
Boxing
10 months ago
By Aonghus Ó Maicín
The Troubles And Boxing - How One Defeated The Other
Boxing
10 months ago
By Kevin Beirne
Who Is Delfine Persoon? All You Need To Know About Katie Taylor’s Opponent On Saturday
Popular on Balls
GAA
23 hours ago
By Michael McCarthy
Liam Sheedy Invites 6-Year-Old With Insane Hurling Knowledge To Tipp Training