Friday night will be a milestone for Jason Quigley as he steps into the ring to fight for a major world title.

The champion is well respected across boxing circles for his unconventional style and professional record to date. 30-0, over half of those finished by knockout or technical knockout.

Someone who has garnered respect for Andrade is 'Irish' Micky Ward. The famous American boxer told Matchroom Boxing how he sees the fight playing out.

19 years ago Arturo Gatti vs. Micky Ward I went down. Round 9 was crazy:

"I know that the Irish fans are going to come out and they are crazy in the best way. If they are out in force it’s going to be loud, they are great fans and they get behind their guy."

"I’ve known Boo Boo for years, he’s the real deal, he always comes to win, he’s a born winner. I was telling him that this is the only time I am going to go against an Irishman as Boo Boo is my guy!"

Ward, who's most known for his trilogy of fights with Arturo Gatti, never fought in Ireland. He did fight three times in New Hampshire however.

One of those was a Ring Magazine 'Fight of the Year' with Emanuel Agustus in 2001. Ward's earlier career was portrayed in the Mark Wahlberg film 'The Fighter'.

"He’s (Andrade) an elite fighter but he’s also a great kid. I wish Jason all the luck in the world in the fight, he’s a great fighter too but Demetrius is my man," he said.

Many have talked about 'Boo Boo's' awkward style and southpaw stance that has thrown many a fighter off his rhythm over the years.

It's been a talking point for Andrade in the build-up. The American hopes to beat Quigley impressively, but he also wants to make a statement to other big names in boxing.

"He can switch, he’s got power, speed, he brings everything and he’s tough with a good chin, he’s the full package, an all-around great fighter that can adapt to any style," Ward said.

"I’ll be on Boo Boo’s side but I’m Irish and if it was any but Demetrius fighting, I’d be rooting for Jason but Boo Boo is like family to me, so I have to back him. Demetrius can really fight." 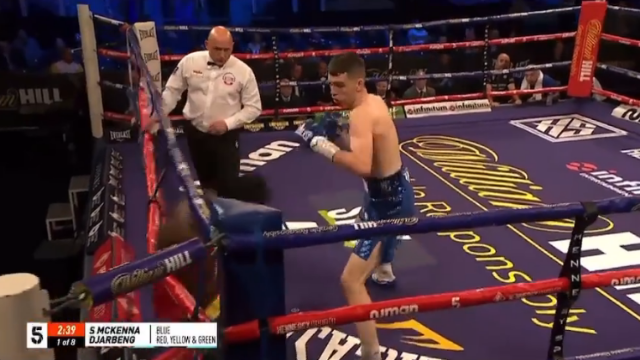 Boxing
6 days ago
By Colman Stanley
Behind The Scenes Footage Captures Great Moment Between Katie Taylor And Canelo
Boxing
6 days ago
By PJ Browne
'Nobody Has Stood Up And Taken These People To Task. It's A Disgrace'
Boxing
1 week ago
By Gary Connaughton
Katie Taylor Shared Touching Moment With Muhammad Ali's Daughter After Serrano Win
Previous Next

Boxing
6 days ago
By Colman Stanley
Behind The Scenes Footage Captures Great Moment Between Katie Taylor And Canelo
Boxing
6 days ago
By PJ Browne
'Nobody Has Stood Up And Taken These People To Task. It's A Disgrace'
Boxing
1 week ago
By Gary Connaughton
Katie Taylor Shared Touching Moment With Muhammad Ali's Daughter After Serrano Win
Popular on Balls
Football
1 day ago
By Eoin Harrington
'Ronaldo Is A Cod' - Remembering Eamon Dunphy's Infamous 2008 Rant
GAA
17 hours ago
By PJ Browne
The Draw Has Been Made For Tailteann Cup Opening Rounds
GAA
1 day ago
By PJ Browne
Donal Óg Cusack Defends Dublin Hurlers After John Mullane Criticism
The Rewind
2 days ago
By Eoin Harrington
Watch: Brilliant Dermot Morgan Dublin Segment From 'The Travel Show' Resurfaces