The rising star of Irish boxing is set to take his next step with a fifth pro fight in Hollywood on Saturday, 11 August. Thankfully for domestic fight fans, Aaron 'The Silencer' McKenna's next bout will be streamed live as part of Golden Boy Promotions’ partnership with Facebook.

Since signing with former Olympian and world champion Oscar De La Hoya's company, the Monaghan native has racked up a clean sweep of four victories, three by knock-out. Since moving to California he has rubbed shoulders with the likes of Vitali Klitschko, Tim Bradley, Ray Beltrán and Paulie Malignaggi and is now out to make his own name in the professional game.

McKenna's fanbase continues to grow, with one of the greatest boxers of all time the most recent convert. Sugar Ray Leonard recently told Balls.ie how impressed he was with the youngster. For McKenna, this was just further affirmation that he was on the right track.

With Sugar Ray, it was great to meet him after the fight. He was very impressed too. He was impressed with my body attack and my pressure as well. Then to have Oscar behind me, he is really fond of me too. Before my fight he came in to wish me luck. He told me to silence them. It’s great to have such a big name on my team.

Training alongside McKenna in California is his brother, Stevie, a former Irish champion and European Youth Silver medalist who recently turned pro. The duo live and train alongside each other. Just this week they met up with former pro boxer 'Irish' Micky Ward and attended the Manchester United versus LA Galaxy pre-season friendly. It all combines to create the ideal all-inclusive base from which to launch his ascent to the top of the paid ranks.

My brother has come over too. He’s living over here now and he has been a great help. We are great company for each other. We push each other on in training and it makes it that bit more competitive. It is great to have him over. Next week closing in, we’ll be sparing with each other. He’s fast, that’ll get me razor sharp for my fights as I'm tapering down.

I just love it over here! You couldn’t get a better place to be for a boxer. It is really the land of opportunity for a boxer. You have the best sparring in the world. I’ve been sparring Lenny Zappa, Fabian Maidana (15-0), and Sergey Lipinets, who was a World Lightweight Champion, Mikey Gracia beat him. I’m getting the best sparring you can get. It is absolutely brilliant.

With the upcoming bout comes increased exposure for McKenna. During their meeting, Ward told him that he was similar to a young Tommy Hearns. De La Hoya specifically requested he features on the card, acutely aware of the devotion amongst Irish fight fans. In an era of unprecedented depth amongst Irish boxers, McKenna is ambitious to contribute to this golden period. 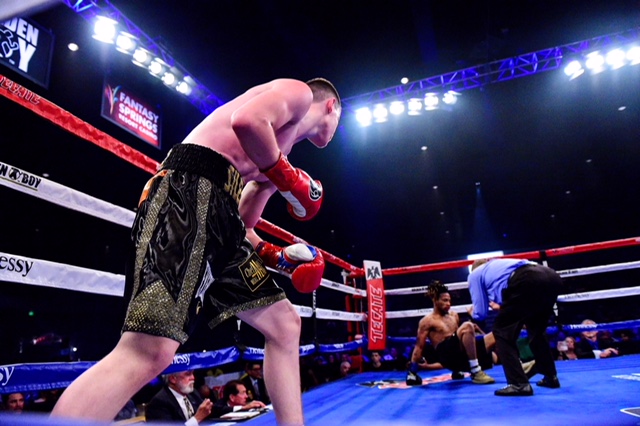 As the interview nears to a close, McKenna once again emphasises an aspiration that has underpinned his ambitions ever since he has moved to America. The California dream is alive and well and under the guidance of Golden Boy and management company Sheer Sports, the 19-year-old will be kept busy with as many as five fights to come before the year is out. Yet the ultimate prize will climax at home. This journey is headed towards one clear destination, a World Title fight in his true backyard.

Someday back home I want to fight in Monaghan, in St Tiernach's Park and fight for a World Title there. That’s my plan. It would be unbelievable to have the Irish fans, Monaghan fans behind me.

There’s no better crowd than the Irish!

SEE ALSO: There Is Still Hope For Irish Boxing