Saturday's Boxing Was An Unbelievably Cruel Night For Paddy Barnes

Manchester paid host to a thrilling night of boxing last night as Carl Frampton lost out in the IBF featherweight world title against Josh Warrington. On the undercard, Michael Conlan won the vacant WBO Intercontinental Featherweight belt but there was a cruel twist for another former Olympian Paddy Barnes, who didn't even get to fight.

Saturday was set to be the first outing for Barnes since he lost against Cristofer Rosales for the WBC Flyweight world title. He was set to face Isaac Quaye and had logged a full fight camp under his belt. The Belfast boxer was due to fight on the same bill as his two friends and made weight on Friday. 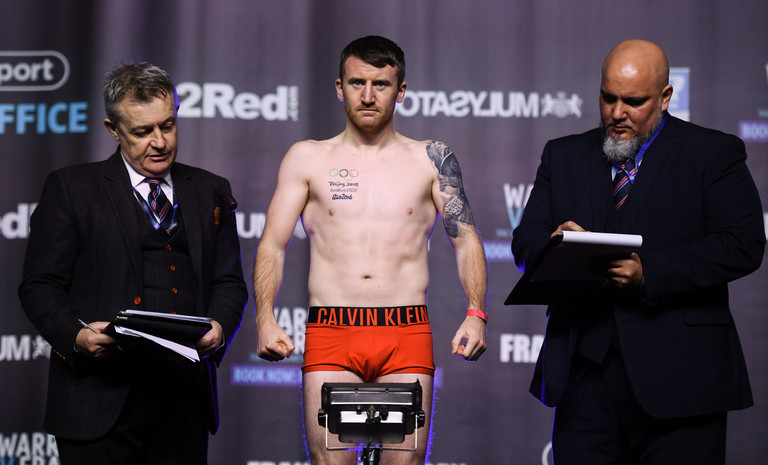 Between them @RealCFrampton @mickconlan11 & @paddyb_ireland have won multiple pro World titles, an Amateur World title, Olympic medals + multiple Conmonwealth gold medals. Fantastic fighters and tonight they are on the SAME bill. Here's to 3 wins out of 3 & another world title!

The contest was set to be a float fight, which means there is no official fight time and it is fitted in where time allows. This is a significantly difficult situation for any fighter as it meant Barnes must be ready to go at very short notice and has no idea of a fight-time, thus making pre-fight meals and warm-ups all the more challenging.

The entire card was broadcast on BT Sport and ESPN/Top Rank live.

Not only was the main event a disheartening affair for Barnes as he watched his team-mate and friend muster a courageous though insufficient showing, but due to the length of the undercard, there was no time available and Barnes did not get to fight.

The 31-year-old toiled away doing the tedious preparation and never got to exhibit it.

Didn't get to fight last night the show went on too late, don't even care to be honest because I'm just gutted for Carl Frampton, gentleman and absolute warrior!

This was an opportunity for Barnes to relaunch his career in the paid ranks having been knocked out in his own hometown earlier this year. Ultimately, 2018 represents the harsh reality that boxing presents for the majority. One shot missed and no chance for redemption.

The professional game has not been as fruitful as the amateur but this is not the end. A return is still possible with Barnes keen to face WBC World Champion Charlie Edwards yet it must come the familiar way for any fighter. Persevering through overwhelmingly struggle for one remote strike at success.