While the boxing world was gearing up for what would be a thrilling heavyweight contest in New York, Ireland's inaugural Last Man Standing competition took place in the National Stadium, Dublin and was televised around the nation thanks to the excellent work of Spórt TG4.

Before this year, boxing had not featured on terrestrial TV since August, 2011. The prizefighter-style format combined with a superb commentary and punditry team that included Andy Lee, Ken Egan, Ray Moylette and Eric Donovan ensured an outstanding event took place to the delight of the gathered crowd and viewers at home.

The story of the night was the success of Roy Sheahan, a veteran of the amateur circuit who entered and won the middleweight division despite a sole pro fight under his belt. 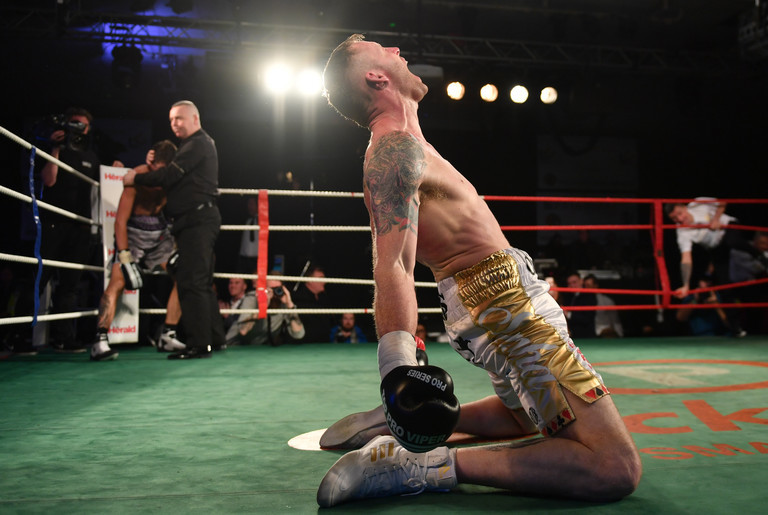 What a fckn talent Roy Sheahan is. Easy to say he's one we've lost, who's slipped though the cracks. But here he is, like his best mate @eric_donovan60, proving oul fellas cam still mix it when they've got the talent and fundamentals 👊

Having beaten JJ McDonogh and Vladimir Belujsky on route to the final, Sheahen overcame Jack Cullen with an explosive first round knock-out. A €25,000 prize is his reward, while the scenes as he embraced his young son Cameron in the ring perfectly encapsulated what it meant to the 33-year-old.

Beyond that, the night represented a success for Irish boxing as it became increasingly evident the event successfully captured large scads of the public's attention.

Huge credit to @SportTG4 for airing @IRELASTMANSTAND tonight. Great to have boxing back on Irish TV #LastManStanding

This #LastManStanding on @SportTG4 is a good watch - v entertaining

Congrats @SportTG4 on fantastic coverage and fantastic commentary...great to see irish boxing back on the telly box 👊 #LastManStanding

Leinster athletic performance coach Cillian Reardon also made his pro debut last night, and was well supported by members of the Leinster squad and backroom team.

What a start to a pro fighting career for @creardon0 🔥 Congrats on a great win 🥊👏👊 #beastmode #BeastFromTheEast pic.twitter.com/6oxE9Fwt78

Huge congratulations to @cillianreardon on his pro debut! Long awaited and a well deserved win! 1-0

While there was one man who certainly seemed to enjoy the night's entertainment.

There is no doubt that the return of boxing to Irish television this year is welcomed. As last night demonstrated the appetite and talent is there. With a host of talented Irish boxers in action in the coming months including Dennis Hogan, Katie Taylor and Jason Quigley, it seems Irish boxing is unquestionably on the rise.

SEE ALSO: 'Sometimes You Feel Like You’ve Missed Your Own Calling And Suffered'