With a world title fight a mere two weeks away now, Jason Quigley is starting to come to terms with the idea of becoming a world champion.

Many have placed the Donegal man as an underdog going into his bout with Demetrius Andrade. It's arguably his toughest task to date facing the challenge of the American.

"I've been visualizing it and I've been going over things," Quigley told Matchroom Boxing. "You get a moment on your own. The rooms quiet, there's no TV the phones off or whatever."

"And you're thinking, 'I have a world title fight coming up.' These things go through your head, 'And the new'; it's definitely something that runs through your mind."

A History of Irish WBO Champions

You only have to look to Quigley's trainer to get a taste of Irish success as far as WBO titles are concerned. Andy Lee famously won the middleweight strap in 2014.

Lee overcame the challenge of undefeated Russian Matt Korobov on that night. An impressive sixth round TKO victory sealed it for the Irish boxer.

It was the first time since 1934 that an Irishman won a world title on American soil, something Quigley will look to replicate on November 19th.

Andy Lee isn't on his own in that regard. Steve Collins has arguably been Ireland's most successful WBO title holder, winning both the middleweight and super middleweight belts.

Back in 1995, Collins beat Chris Eubank in the Green Glens Arena in Millstreet, Co. Cork. While it was a historic night as far as the result is concerned, the build-up will be fondly remembered.

In an attempt to off put Eubank, Collins enlisted the help of a 'guru' who he said was hypnotising him for the fight. It clearly rattled Eubank leading up to it.

This was topped off by Collins listening to music in his corner and staying still as Eubank made his walkout. Buckets of mind games were played by the Irishman.

His rematch with Eubank later that year at Páirc Uí Chaoimh was an epic defense of his super middleweight title and helped to solidify Collins as one of the world's best.

⏪Back in 1995 Steve Collins beat Chris Eubank for a second time and sparked jubilant scenes in Cork🙌 pic.twitter.com/CLAVtOL6y1

While it's a unique challenge that Quigley faces later this month, he's aware of what's been done by his fellow Irishman in the WBO ranks.

His opponent, 'Boo Boo' Andrade, has given Quigley some credit in taking the fight on November 19th. Many believe Andrade was on the cusp of fighting GGG or Canelo.

At 30-0 and undefeated after a decorated amateur background, Andrade is a challenge not many want to face. He's well aware of the threat Quigley brings.

"Quigley was once a candidate to fight Canelo Alvarez," the WBO middleweight champion said in a Youtube livestream with Ring IQ.

See Also: 'I Believe In Him... We’re Going In With Every Intention Of Winning The Fight' 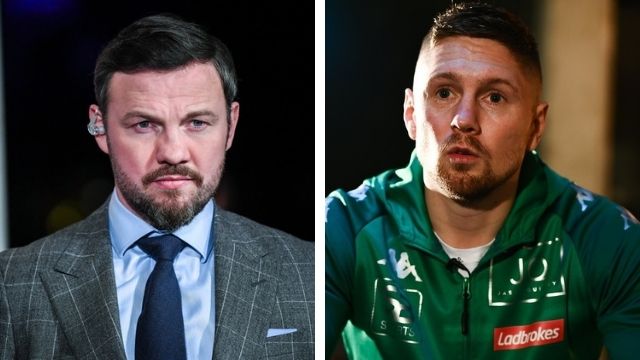 Boxing
1 month ago
By Balls Team
'I Believe In Him... We’re Going In With Every Intention Of Winning The Fight'
Boxing
3 months ago
By Jonathan Byrne
'There Have Been Many Lives Saved Through Boxing': Calls For Increased Funding After Tokyo Glory
Boxing
8 months ago
By Maurice Brosnan
‘It Was Total War’ – Reliving One Of The Most Thrilling Fights In Boxing History
Popular on Balls
Football
1 day ago
By PJ Browne
Saoirse Noonan Celebration Was Nod To Chiedozie Ogbene
Football
13 hours ago
By Jonathan Byrne
Jack Byrne Reveals Man City Player Who Was Toughest To Train Against
Snooker
1 day ago
By Gary Connaughton
Ronnie O'Sullivan Labels Young Star As Snooker's Answer To Roger Federer
Football
17 hours ago
By Eoin Harrington
Michael Carrick Explains How Violence In Rome Inspired Famous 7-1 Win