November 19th will be an incredible night for Irish boxing fans, as Donegal native Jason Quigley steps into the ring to fight for a middleweight world title.

That night he'll have to get the better of undefeated American and WBO champion Demetrius Andrade. Who else heralds experience of dethroning champions stateside?

'The Gypsy King' of course. Jason Quigley has enlisted the help of heavyweight champion Tyson Fury in preparation for his big fight in two weeks time.

The Irishman has been training out of Fury's gym in Morecambe, England, before he travels to New Hampshire to fight for a title in enemy territory.

The Gypsy King 👑
.
Thank you @Tyson_Fury for having me in your gym for camp 🙏🏼
.
You are your environment and mine right now is a world champion environment 😉🥊☘️
.#AndradeQuigley #GypsyKing @DAZNBoxing @AndyLeeBoxing pic.twitter.com/cVTwLW1cBH

While Tyson Fury looks to cement himself as one of heavyweight's greats in boxing, he has let it known before that he wants to become a trainer after he's finished competing.

This is detailed through his wife, Paris Fury, in her book 'Love and Fury: The Magic and Mayhem of Life with Tyson'. She says, "He believes he has a great deal to offer to his beloved sport."

"He and his trainer, SugarHill Steward, have already discussed the possibility of going into business together, as they’re both equally keen to discover and nurture promising new talent."

Fury unveiled his state-of-the-art gym in Morecambe last year and has been nurturing young talent inside it's four walls ever since.

"Tyson has already had a taste of this with the young boxers who use his gym in Morecambe, who’ll often ask him for advice and guidance," Paris said in her book.

Many have described Demetrius Andrade's fighting style as difficult to solve. His unorthodox movements and southpaw stance have been the talk of avoidance from some of the big guns.

The likes of GGG and Canelo were discussed as potential opponents for Andrade, given his impressive 30-0 record and dominance in the middleweight ranks.

Quigley spoke before about how his amateur boxing record will help him in preparation for the fight, having come up against lots of different styles with short turnover.

"You're never gonna really get a replica sparring partner in anything along those lines," Quigley said. " Demetrius is an individual type fighter, he's got his own style."

"I'm very lucky though and grateful that I've had a very long extensive amateur background as well. You come up against all sorts in the amateur game. You could be fighting five different types of fighters in a week."

"I'm confident getting in there that Demetrius is going to be a style that I haven't been up against, but I'm going to be well able to adjust to it and get on with the plan in hand." 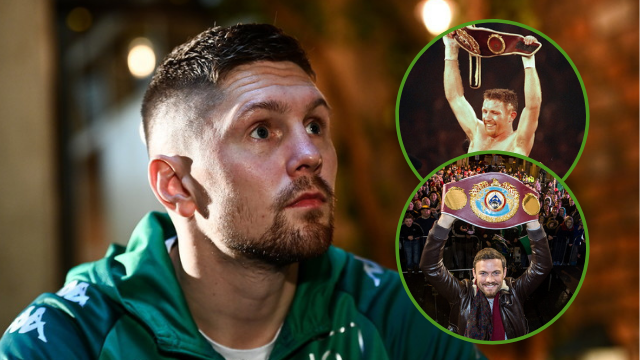