It's been reported this evening that one of the journalists who worked on this week's Panorama documentary 'Boxing and the Mob' has been told by police in Northern Ireland of a threat to his life.

The documentary, which explored MTK co-founder Daniel Kinahan's interests in professional boxing and (allegedly) organised crime, aired on Monday in the UK and Ireland. Today, the BBC said the PSNI had informed one of its journalists of  'an unspecified threat from unnamed criminal elements in relation to the programme'.

Jo Carr, the BBC's head of current affairs, said of the threat:

"The BBC places the utmost priority on the safety of our teams, whose journalism plays a vital role in a free society. It is despicable and intolerable if thugs think they can muzzle a free press through intimidation.

"We will continue to throw light into even the murkiest of corners."

"Someone has got to look out for this sport. They really need to look at this situation very carefully, because it’s bloody dangerous," the Clones man said.

Kinahan's lawyers denied to the BBC that their client was involved in any criminality or wrongdoing. 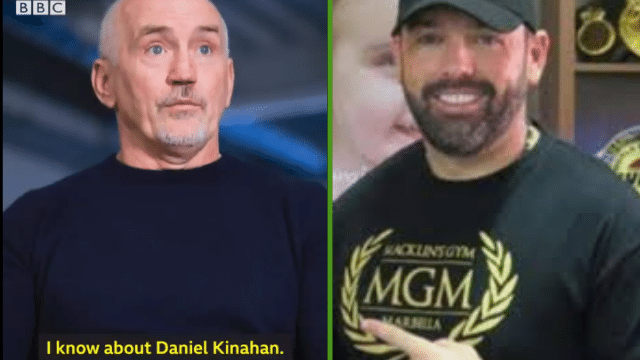 Boxing
1 month ago
By Donny Mahoney
MTK Fighters Call Out Barry McGuigan After BBC Documentary On Kinahan
Boxing
1 month ago
By Donny Mahoney
'We Make A Livelihood Out Of What We Get. We Make A Life Out Of What We Give'
Boxing
5 months ago
By Paul Moore
Manny Pacquiao Confirms He Wants To Fight Conor McGregor Next Year
Previous Next