In a boxing year starved of marquee events, it's difficult to turn your nose up at a promotionally mammoth encounter such as Gennady Golovkin versus Kell Brook for world middleweight honours.

The following poll is the model encapsulation of the double-edged sword that is Sky Sports' involvement in boxing.

On the one hand, as a boxing fan and writer, it fills my heart with joy to discover that 30,000 individuals took the time to vote in a poll about a boxing match. It shows the colossal interest that Sky have generated in the UK over the past decade, with genuine stars such as Carl Froch forging bona fide Hall of Fame careers, and blossoming talents such as Anthony Joshua filling large arenas to the brim with beer-chugging football fans. Boxing is thriving across the Irish Sea.

On the other hand, the poll proves that at least 13,800 people are morons. The fact that 46% of people believe Kell Brook is capable of even coming within an ass's roar of bringing Gennady Golovkin's 22-fight knockout streak to an end speaks to the delusions Sky and its boxing affiliate, Eddie Hearn's Matchroom, are capable of inciting amongst a general sporting public gradually coming back around to the notion that boxing might actually be a compelling sport again.

In the name of balance, here's how fans on the Throwdown Boxing app voted.

Am I an idiot for finding myself irked by a Sky Sports poll in which, as we know, had Arsenal been an option they too would have been widely fancied to beat Gennady Golovkin? Perhaps. But the deception runs far deeper; it's a calculated effort to get people to part with their money for what will transpire to be another one-sided mini-massacre. Despite the theatre of verbal warfare that became of Sky Sports News in the lead-up, I didn't pay money to watch the farce that was David Haye versus Audley Harrison in 2010. But the backlash to the ramshackle shit-show that followed was so venomous that it actually killed pay-per-view boxing in England for a couple of years.

Make no mistake about it - Kell Brook is a sensational talent, a worthy welterweight world champ, and one of the most entertaining pugilists Britain has produced in some time. But climbing two divisions to fight the baddest man on the planet, while thoroughly admirable, only ends one way. As GGG's trainer Abel Sanchez said at today's press conference:

On Saturday, Kell Brook will discover it takes more than a 10-week scientific experiment to beat Gennady Golovkin.

And Sky know it, too.

They deploy Brook's mates - the Froches, the Nelsons - to big up his chances based on 'watching him in the gym' or his being 'a nightmare to spar against'. They put former world champion and respected Showtime analyst Paulie Malignaggi in a ring and ask him to explain how Brook can win this fight (the answer, by the way, is essentialy 'don't get punched in the head or body by Golovkin).

Meanwhile, on their doorstep they have two men who were world class middleweights in their pomp; two who have faced the Kazakh behemoth head-on and received thorough, violent beatings. Men who have experienced the pain and woes of trading leather with The Bear Hunter yet have received comparably little airtime. Matthew Macklin and Martin Murray have, for all intents and purposes, been nowhere to be seen in the lead-up to this contest, for if they spoke the truth - as both tend to - the illusion of this 'epic encounter' would burst.

It's an illusion bolstered by the likes of the following Sky graphic which has been shared across the internet today, seeming to suggest Brook will enter the O2 Arena ring built like a brick shithouse relative to his skinny-bicepped opponent. 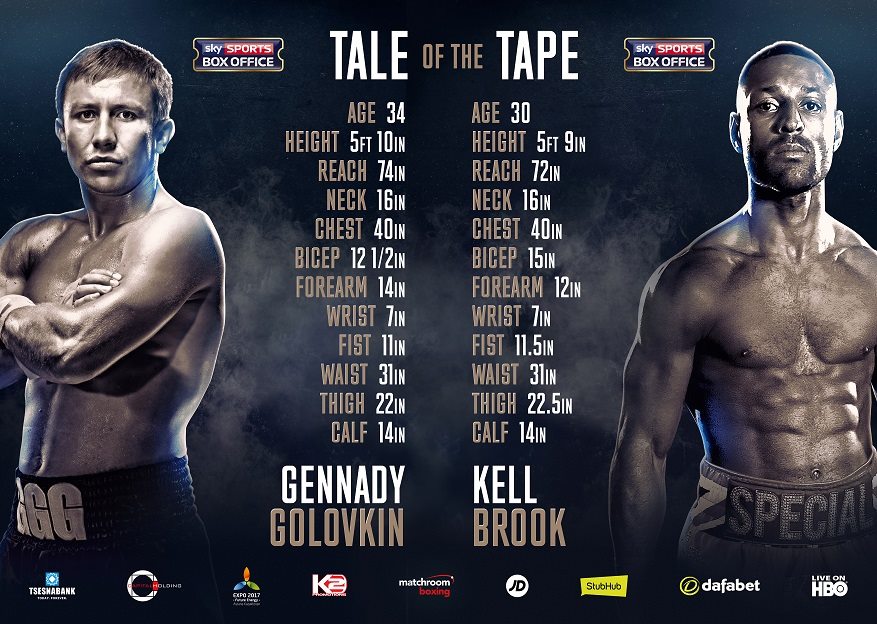 These stats - or the ones that matter, at least - are frankly wrong. For one thing, Golovkin's reach is 70 inches, not 74. Brook's reach is 69 inches, not 72. Golovkin is half an inch taller than listed here, and also possesses one of the densest cores in boxing; a 31-inch waist he is not.

It certainly begs a few questions as to the methods of measurement used on both fighters. But hey, if 2016 has taught us anything it's that you don't need the truth when you're peddling a false narrative.

Kell Brook is admittedly big at welterweight and might well win world titles up at 154lbs in the coming years, but trying to convince us that he'll be a physical match for Triple G on Saturday night is oddly sinister, and a microcosm of the story they've pushed over the past month of promotion. A brave Briton climbing weight classes for a shot at history Brook certainly is; a chance at an upset on par with Buster Douglas he has not.

One of the biggest misconceptions in boxing is that a fighter going up in weight has nothing to lose. If casual fans pay money to cheer a fighter on and he receives a savage beating, those casual fans will remember. Some won't forgive, but many will simply lose interest. Another few quid, another anticlimax after weeks of bombastic hype and sweaty montages set to Sigur Ros or whatever the hell.

Boxing, by its nature, requires promoters and television networks to sell fights. But bigging up Brook's chances of an upset strikes as oddly callous considering the ridicule he'll likely face, while lying outstretched on the canvas, from those same football fans who voted for him in vacuous Sky poll.

It'll all seem a bit pointless on Saturday night as one of the deadliest pugilists in the world decimates another Great Sky Hope, who despite his own upper echelon talents, was built to fall on this occasion.