Thriving In The Margins: Irish Boxing Is Booming

These are all questions that are part of folklore, but after this morning we can add another. Where were you when a red-haired young man called Michael Carruth from Drimnagh in Dublin’s south side made pugilistic history by winning our first-ever gold medal in Barcelona this morning?

There were a hundred and fifty Irish people in the Stadium; the support they gave him was out of all proportion to their numbers – and at the end there was hardly a dry eye among the Irish contingent. Believe It or not, I saw veteran sportsman and veteran journalist David Guiney weeping unashamedly. And I had to lend Kevin O’Flanagan one of my handkerchiefs.

There were slightly more than 150 people in Drimnagh GAA club last week, and tears were not forthcoming from the handful of journalists sat ringside despite the ill-thought-out white table. However, that night is an accurate indicator of the regard boxing is held in within this country.

O’Donovan: Your ego is after bringing you into this and you didn’t even want it. Last time I was on a Ben & Jerry's diet, gating on, having a laugh. Having a session, a couple of tinnies.

O’Donovan: Actually, yeah! You paid for the oil, for the heating, the car service…

Last December Stephen McAfee and Colin O’Donovan produced the fight of the year in the National Stadium. They faced each other once again last week and topped it. The bout was expertly promoted by Boxing Ireland Promotions and extensively covered by Irish-Boxing.com. Their pre-fight promotional video was a welcomed departure from the contrived weigh-in pantomime now widespread in the sport. It was mutual, genuine dislike and a frank exchange that proved an astute indicator of what was to come. 650 people turned up to watch the epic small hall contest.

It is almost ten years since Bernard Dunne's world title fight at the 02 Arena and little has threatened to match it since. It was telling to see the shrewd businessman that is Eddie Hearn choose an American conquest for his prized Irish boxer instead of a homecoming. The question lingers as to how durable Katie Taylor’s home support really is. Voted Ireland’s most popular athlete, yet there was always a question mark as to whether the well-wishers' pockets would match their mouths. Hearn’s decision goes some way towards providing an answer.

This remains the acid test for the sport on this isle. It is a hurdle failed to clear in 2015 with Andy Lee’s futile Thomond Park bout. Frank Warren’s assurances that the contest was canceled due to a packed UK fight schedule did little to satisfy wildly conflicting ticket sale reports.

The reality is that Irish boxing could conceivably maintain four world champions by the end of the year and it's hard to imagine one selling out a considerable home venue. The sport is at a perpetual high without even a fraction of comparable backing.

Yet McAfee and O’Donovan’s eight round war bore out as further evidence of the exceptional standard within Irish boxing. It was also announced on the night that the electric Eric Donovan had signed for Boxing Ireland Promotions.

Happy to sign and to commit to working with @LoveIrishBoxing They have brought me to my first top of the bill card and to my first title. I dream of more (homecoming + titles) and I believe these guys will deliver. Tnx for all the wonderful support as always 👊🏻⚡ pic.twitter.com/R0w51BDLad

It was an appropriate week for the Irish fight of the year to grace native fans. Just seven days later Jason Quigley and Ryan Burnett fought on ESPN and Sky Sports respectively. Quigley ended the bout in the sixth with a technically perfect body shot. A sharp pivot of his left foot loaded the medial ligament to generate a thunderous blow to Daniel Rosario’s kidney and that was all she wrote.

Burnett is Ireland’s greatest prospect right now. The Matchroom boxer was the nation’s unquestionable sportsman of the year in 2017 when he became a unified world champion. A broken hand in the third did little to hinder a proficient performance.

You’d wonder how many casual Irish sports fans would recognise either of the pair? 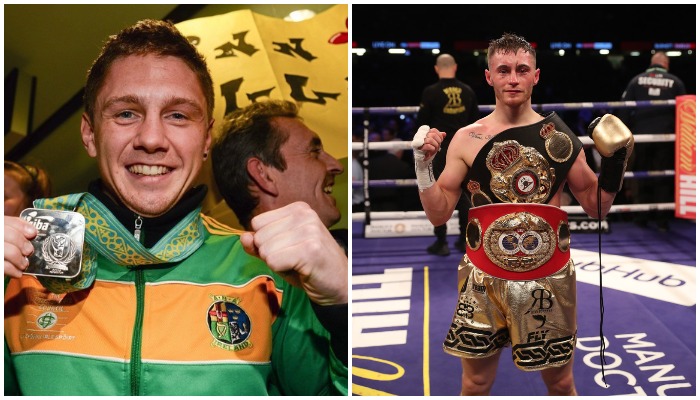 They are not the only source of excitement amidst the paid ranks. Dennis Hogan is one fight away from a World Title and back in action this April. The Kildare man missed Australia’s biggest boxing event, the ‘Battle of Brisbane’, when his friend and sparring partner Jeff Horn beat Manny Pacquiao in front of 51, 012 spectators. Michael Conlan fought on the undercard, but Hogan was unable to participate. That forced inactivity meant Hogan was helpless as he watched his name sail down the world rankings. His name dropped from third to seventh before his return in October. Just recently he received a WBO world ranking boost with a jump from third to second.

The homecoming may not be forthcoming but Katie Taylor’s title defence on Daniel Jacobs’ undercard in New York is base camp for her ascent to the peak exultance of the sport. It is a trying task to penetrate boxing’s biggest market but those fists are capable. Under Ross Enamuit, Taylor has demonstrated remarkable versatility forged over a prolonged amateur career. She can brawl or out-box her opponent depending on their choosing.

Spike O’Sullivan’s much-touted clash with Gennady Golovkin would represent a significant potential payday for the Corkonian. TJ Doheny's willingness to travel for fights is set to be justly rewarded with an IBF World title challenge later this summer. Heavyweight Niall Kennedy continues to routinely provide the ultimate fairy-tale story as the boxer who overcame a host of obstacles to become a Garda and the New England heavyweight champion. While the paid ranks are not just home to title challengers. When it comes to the still-developing yet highly promising Aaron McKenna, Oscar De La Hoya had this to say to balls.ie.

He is one of Golden Boy’s most promising future stars. Aaron has demonstrated in just two professional fights so far that he is a fighter to be feared and respected. I can’t wait to see what the future holds for him.

The outstanding position of the sport is all the more remarkable given boxing’s place is on the fringes of the nation’s consciousness, fashioned to a four-year rotation that revolves back into the limelight every Olympic cycle. Not since Bernard Dunne has an Irish boxer captured widespread public support. Those most likely to do so refuse to entertain the possibility, as they continue to ignore the Irish fight fan and boxing media. MTK Global's media ban has only affected emerging boxers and a small core of sports writers endeavouring to progress upstream despite their niche beat.

The majority are athletes thriving in the margins of Irish sport, pushed abroad in search of expertise, the fights or a market. The viability of the career, for everyone from fighter, trainer and hack, is precarious. Its prosperity is underlined by genuine adoration for the sport. Listen to Dennis Hogan, Eric Donovan or Aaron McKenna speak. It seeps out of every fibre, sheer unbridled devotion and adulation. The party has a sense of belonging regardless of if it is outside the limelight.

That emotion Houlihan wrote of as Michael Carruth embraced his father ‘Aussie' to the soundtrack of his companions tears has not dissipated. It is ever-present, and continues to drive the sport today.

SEE ALSO: 'Sometimes You Feel Like You’ve Missed Your Own Calling And Suffered'

SEE ALSO: From Addiction, Panic Attacks, Anxiety Disorders To The Next World Champion

SEE ALSO: 'I Want To Fight For A World Title In St Tiernach's Park': Aaron McKenna, Rising Star For March