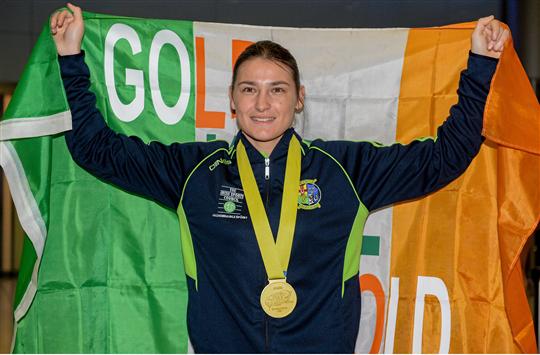 Katie Taylor went all Paddy Barnes and took a swipe at RTE over their alleged disinterest in boxing. She branded the station 'disrespectful' and said they seemed to be 'consumed with rugby and GAA'.

Her surprisingly blunt criticism of the national broadcaster has generated a huge amount of comment online.

Many have agreed with Katie's comments, with much of the online commentary focusing on what they contend is the station's obsession with rugby. RTE's Head of Sport Ryle Nugent has become (probably unfairly) something of a punchbag on that account.

Others have disagreed, saying that ultimately, while they revel in Katie's success, unless it's an Olympic title, the public simply do not want to sit down and watch her fights.

Such is the impact of a belt from Taylor, RTE were moved to issue a response (Paddy Barnes' numerous attacks on the broadcaster have yet to elicit a response) later this morning. They said they did not wish to get into a bidding war with TG4 over the rights and stepped down. They declared it was 'RTÉ’s stated policy to ensure we first and foremost but not exclusively concentrate on national teams, national games and major events'.

Here is a flavour of the reaction to the scrap online.

Katie Taylor doesn't get enough credit for what she's achieved. If she was a man and British the media would never stop banging on.

This is so stupid - why did TG4 compete against RTE to broadcast the World Boxing Championships? pic.twitter.com/PusySWx63C — Colette Browne (@colettebrowne) December 23, 2014

@KatieTaylor not going to the #RTEsportawards is just brilliant! One of the biggest sports icon in Ireland and yet doesn't get any respect — tj evesson (@tjevesson) December 23, 2014

@KatieTaylor has issues with the boxing coverage...she's dead right, 5 consecutive world titles and barely any coverage for her from RTE! — Tríona O' Sullivan (@TKD_T) December 23, 2014

Disappointing to see Katie Taylor in a war of words with RTE. In reality if enough people wanted to watch her fights they would show them! — Dick Clerkin (@dickclerkin8) December 23, 2014

Will someone please tell Katie Taylor we like that she wins but we don't want to watch all her fights.... If even any of her fights — Brian Furey (@Brianfurey94) December 23, 2014

Is the nations boxing hero beginning to get a bit big for her boxing gloves ? Katie Taylor , just asking, like !!