Tyson Fury reaffirmed his place at the top of the heavyweight pecking order last night, knocking Doentay Wilder out in the 11th round of a stellar bout in Las Vegas.

It was an incredible fight, one which did not take long to spark into life.

The Brit started the better of the two, going on to record a knockdown in the third round. However, Wilder would immediately respond with two knockdowns of his own in the fourth, although neither looked like it would be enough to keep Fury on the canvas.

From this point on it was all Fury. He landed far more punches than his opponent, scoring another knockdown in the tenth. He would land the final killer blow one round later.

It was a fully deserved victory for the 33-year old, who was leading on all three judge's scorecards at the time of the stoppage.

After Anthony Joshua's defeat to Oleksandr Usyk a couple of weeks ago, this performance further established Fury as the man to beat in the heavyweight division.

Despite the trash talk exchanged between himself and Wilder in the buildup to the fight, Fury was complimentary about his opponent's performance last night.  It seems as though the favour was not returned.

The American has previously insisted that his opponent had cheated to win in their second fight, with everything from tampered gloves to spiked water being used as an accuse. All accusations have been baseless.

In the buildup to last night's bout, Wilder once again complained by the gloves Fury had opted to use with little success.

Speaking after the fight, Fury revealed that the 'Bronze Bomber' would not even shake his hand despite his best efforts.

🗣️ "I went over to shake his hand and say well done and he was like 'No, I don't respect you'."

Tyson Fury revealed the exchange of words after knocking out Deontay Wilder in the 11th round in Las Vegas to defend his WBC heavyweight title. pic.twitter.com/qoOUWYrra2

You've got to take your hat off to Wilder and his team, he put up a good fight. That's what I'm here for, I wasn't here to blow someone over in one round.

I travelled the world for so many years looking for challengers and he gave me a real worthy challenge tonight for sure...

I thought that we fought it out, even with all of the allegations that have been made towards me in the buildup to this fight.

We fought it out like two warriors in there. I went over to shake his hand and say 'well done', and he was like 'no, I don't respect you'.

How can you say I cheated when you know in your heart, and your whole team knows, that you got beaten fair and square?

He's just a sore loser in boxing. He's not the first one and he won't be the last one.

This brings to a close one of the more interesting trilogies in recent boxing history, with last night's fight perhaps the best of the lot. 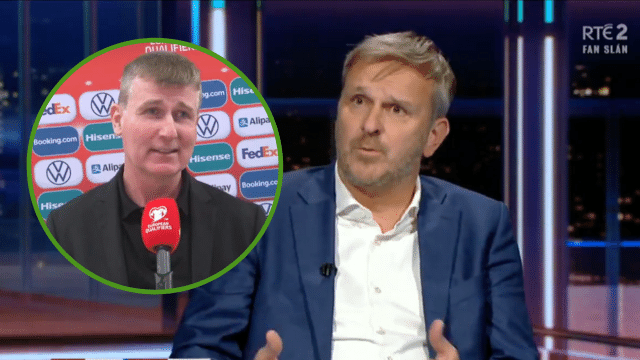 Boxing
3 months ago
By Gary Connaughton
Joe Rogan Believes Count In Fury-Wilder Fight Result Of 'Error Or Corruption'
Boxing
3 months ago
By Jonathan Browne
How To Watch Fury Vs Wilder 3: What Time Is It? How Much?
Boxing
3 months ago
By Daniel Hussey
Tyson Fury Trolls Anthony Joshua By Offering To Train Him For Free To Beat Usyk
Popular on Balls
GAA
2 days ago
By PJ Browne
Insane Drama As Late TJ Reid Goal Sends Ballyhale Into All-Ireland Final
Rugby
1 day ago
By Colman Stanley
Yesterday Was Not The First Time Wayne Barnes Sent A Player Off For Getting Lippy
Rugby
21 hours ago
By Colman Stanley
Champions Cup Predictions And Permutations For The Irish Provinces
The Rewind
2 days ago
By Jonathan Byrne
The Definitive Ranking: Deli Items Ranked From Best To Worst