All week, in the build-up to UFC 270, we've seen Francis Ngannou and his management team do their best to vie for a fight with Tyson Fury.

The UFC Heavyweight Champion first had to overcome the hurdle of Cyril Gane in their main-event matchup. Ngannou won an impressive decision to retain his belt.

Now at 35, it seems like Ngannou is in a contract limbo of sorts. He's beaten the cream of the crop of the UFC's heavyweight division and is setting his sights high.

A crossover to boxing wouldn't be a far reach. Ngannou is known for his knockout power and his name has only grown in casual circles since his win at UFC 270.

Speaking at a UFC press conference before the big fight, this was what Ngannou had to say about his next fight:

If you give me the two options, I would choose fighting Tyson Fury. After fighting Stipe (Miocic), the Jon Jones fight was on the table but it seems like nobody really cares about it.

In the aftermath of Saturday night's heavyweight fight, Tyson Fury was clever enough to offer his congratulations. It wasn't without a bit of mild taunting.

"Congratulations Francis Ngannou," he said on twitter. "But if you want to make some real money come see the 'GK' (Gypsy King)."

Fury isn't wrong for his assessment of Ngannou's payday compared to a typical boxing payout. A take-home purse of $600,000 was awarded to the Cameroon native post-fight.

That number doesn't include money made from PPV bonuses or sponsors but it's still far short of what the likes of Tyson Fury or Anthony Joshua make for title bouts.

In fact, for Tyson Fury's trilogy fight with Deontay Wilder - Fury made a reported $30 million. Ngannou would find it hard to turn down that kind of money.

It remains to be seen if Ngannou is using the boxing crossover as leverage for a better UFC deal, or if he can pull off a venture into boxing without leaving the UFC.

Nonetheless - the negotiations will continue on the part of Ngannou and the UFC and we should have a resolution soon. 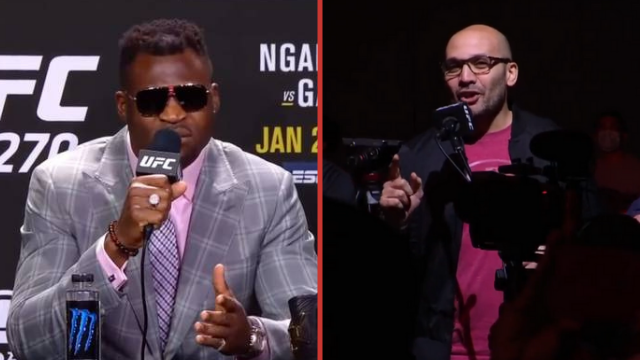