Tyson Fury has claimed in an interview that he would train Anthony Joshua to beat Oleksandr Usyk in his rematch for free. Fury was speaking ahead of his own world heavyweight title rematch fight with Deontay Wilder.

The 33-year-old defends his heavyweight belts against the Bronze Bomber on Saturday night in Las Vegas. However, despite his busy schedule, Fury says he would take the time to train his heavyweight rival to beat Usyk in a rematch.

"I know that if I trained Joshua - if me and SugarHill trained him for this next fight - he'd definitely beat Oleksandr Usyk. That's a fact," Fury told BT Sport.

"And I would be open to doing it. I'd be very open for me and SugarHill training him. I'd do it for free, because I don't need the money. I wouldn't take his money anyway. We would take on that challenge no problem. I guarantee he would beat him."

When Fury was asked if he'd actually be prepared to help Joshua, Fury replied: "For free. For free. For free." Joshua lost his heavyweight belts to Uysk in a points decision last month but the Gypsy King is still convinced that the 31-year-old can turn the tables in a rematch.

When asked about a possible training programme, Fury answered: "That would be telling now, wouldn't it? I tell you what I'd do with him. I'd give him the right information to beat Usyk. Which I'm not going to say what but I think everybody knows.

"This information that I say, you've got to train for it, you can't just do it. It's not a game plan. It's not just like saying 'do this, do that' and then doing it. You have to train to do it but I think he could."

Joshua and Fury were due to fight this year, before Wilder demanded a trilogy fight with Fury leading to Joshua taking on mandatory challenger Usyk. Asked about potentially fighting Joshua before retiring, Fury admitted that the chances are becoming more and more slim.

"After I beat Wilder, I would have liked to fight Joshua but he just keeps dropping decisions all the time. The reality of him beating me is becoming less and less. People would still pay for the fight and would want to watch it but it's not as interesting any more," Fury said. 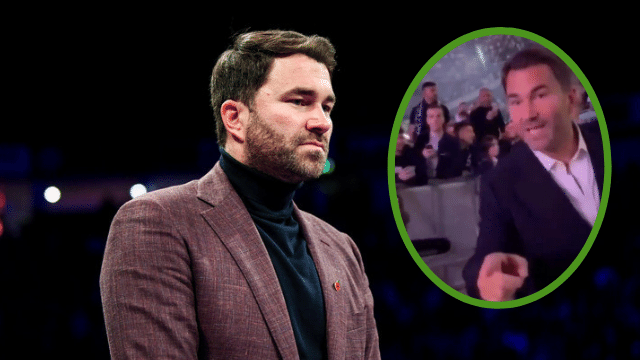 Boxing
7 months ago
By Gary Connaughton
Watch: Eddie Hearn Was Fuming With Comment From Fan After Joshua Loss
Boxing
7 months ago
By Jonathan Browne
How To Watch Joshua Vs Usyk: What Time and How Much?
Boxing
7 months ago
By Jonathan Byrne
Why Anthony Joshua Is In For The Biggest Test Of His Career On Saturday
Popular on Balls
GAA
1 day ago
By PJ Browne
The Draw Has Been Made For Tailteann Cup Opening Rounds
GAA
2 days ago
By PJ Browne
Donal Óg Cusack Defends Dublin Hurlers After John Mullane Criticism
The Rewind
3 days ago
By Eoin Harrington
Watch: Brilliant Dermot Morgan Dublin Segment From 'The Travel Show' Resurfaces
Football
3 days ago
By Eoin Harrington
Alan Shearer Says Roy Keane "Ran Away" From Him After Famous Clash