2021 has started off a lot like 2020. The news on the TV remains bleak. January is hard enough withoutLevel 5 lockdown. During these challenging times, we all need stories of hope and inspiration. In fact, we could all do with a weekly fifteen minute chat with boxer Eric Donovan. You hang up the phone and feel ready to run for President or bench press SUVs.

The Kildare man is a bolt of positivity and enthusiasm. He's living proof that you can change your life. The second act of Eric Donovan's boxing career is one of the great Irish sport stories of the past decade.

Amazingly, Donovan is on the verge of an incredible achievement in his career. Over the Christmas holiday, Donovan learned he was the mandatory challenger for the European Boxing Union super featherweight title. While the logistics on when and where the fight will take place remain to be sorted out, Donovan is confident that some time this year, he'll be in the ring with Maltese fighter Haithem Laamouz with a European title on the line.

It's the latest remarkable development in Donovan's career. Four years ago, Donovan was beginning to prepare himself for a career as a counsellour, only to rediscover his love for boxing before his 31st birthday. Four years later, he's in the shape of his life, but he hasn't lost that passion for inspiring others.

Here's how he explains it:

'I was retired don't forget. I was retired. At the end of my amateur career, I'd represented Ireland for over ten years. I won a lot but also let myself down on a number of occasions. I retired for three years and went into education and thought the boxing days were behind me. But then approaching my 31st birthday, I had a resurgence of ambition, of motivation. I said to myself 'Eric you have one more round, one more fight. Unfinished business. Redemption.' I didn't have the tools to deal with my past career. but now I have the tools to deal with whatever presents itself. I'm mature now. I have an education. I can do it. I was just about to do my degree in counselling and the conclusion I came to was, 'I can always go back and do my degree but I can't always go back and box.'

'It was just before my 31st birthday when I turned professional. I'm 35 now and I could be fighting for a European title. It's amazing.'

Donovan says he found purpose by making fundamental changes to how he lived his life.

'In my life I made a change.  A root and branch change. I had to disconnect with the old way of living. I just wanted to be the best version of myself, and the best human being I could be. I wanted to be the best partner possible, the best husband possible. And that's what gives me purpose. I didn't understand what my purpose was. There was a time in my life where I was only a boxer. I was Eric the boxer. And I didn't know anything about morals or values. But today I know who I am. I'm a man of principle. I have great passion. I have a purpose in life.

Donovan was this week announced as the health and well-being ambassador for BearingPoint. He's the perfect appointment. It's rare to meet an athlete with a grasp of both the emotional and physical side of wellness.

Donovan says he fully expects to start that degree in counselling once his career in boxing ends. But even though he's 35, Donovan has no intention of quitting just yet. After all, he's now just one fight from glory.

SEE ALSO: 'I Dreamed About Nights Like This' - Donovan's Redemption Delivered 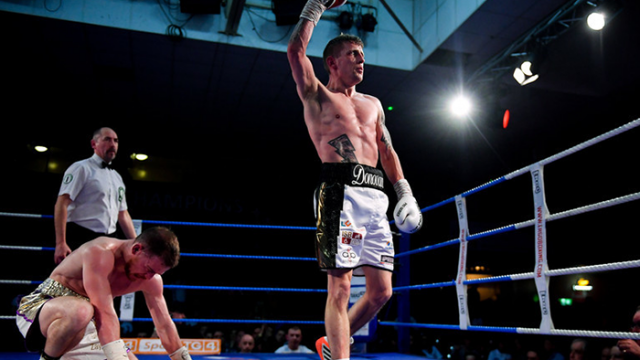