England are Cricket World Cup champions, after winning a phenomenal, mindbending match against New Zealand at Lord's this evening. It was a final to savour and one of those events that make us so thankful that sport exists, if only to forget about the madness in the world for however long a game will drag on for.

Unfortunately we barely had fifteen minutes to savour the spectacle before being thrust back into the mire of stupidity by an outrageous feat of trolling from wannabe 'Year of the Rabbit' extra and member of Parliament for North East Somerset Jacob Rees-Mogg, who tweeted the following: 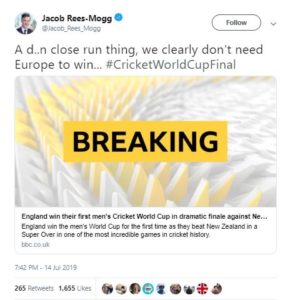 As you may have learned by now, the captain of the England cricket team is from Rush, not to mention the New Zealand-born man of the match for England and the bowler from Barbados who bowled the final ball in England's triumph. Europe and the world beyond have been quite helpful for English cricket today.

Except for the Freedom of Movement and Common Travel Area as underpinned by the EU which gives your Irish captain the right to live work and travel in England.#CWC19Final

Irish captain. What a sap. https://t.co/wM6K6QoNc2

Our entire squad has been enriched by immigration, you thuddingly mediocre ghoul. https://t.co/S0DlXPgKnm

Our director of cricket until late last year was South african

Our current Coach is Australian

Our current captain is Irish

Our super over bowler is Barbadian

A celebration of inclusivity and this moron chooses now to demonstrate his introverted bias.

Literally got an Irish captain you twonk. https://t.co/m7VHYVQdjG

Our captain was Irish you fucking twat. https://t.co/Tv810kb6or

And then you go a spoil it all by saying something stupid like: https://t.co/tsUnikpE22

Anyway, congratulations to England. It's pity your country is run by shitgibbons. At least you have cricket.

Cricket
11 months ago
By Michael McCarthy
Irish Commentator Gets Rather Excited On BBC As Ireland Beat World Champions England
Gaming
1 year ago
By Sean Meehan
FIFA 20 Team Of The Week 10 Is An Absolute Blockbuster
Cricket
1 year ago
By PJ Browne
England Cricketer Ben Stokes Slams Sun Newspaper Over Story About Family Tragedy
Popular on Balls
Olympics
17 hours ago
By Andrew Dempsey
'She's A Superstar': Swimmers Heap Praise On Mona McSharry Ahead Of Olympic Final