Ten Years On, Remembering One Of The Biggest Victories In Irish Sport, And The Tragic Fall Out

Incredibly, it's been ten full years since Ireland announced itself out of nowhere as a cricket power, shocking Pakistan and qualifying for the last eight of the World Cup. It was just one incident an absolutely insane week that followed which included the sudden death of the Pakistani coach Bob Woolmer.

Jerry O'Sullivan, presenter of Kerry Today on Radio Kerry, was then Sports Editor of Newstalk and was in the Caribbean for a tournament that was one of the craziest and memorable sporting events in recent history.

“He was murdered! Murdered! Why don’t you write the truth?!”

The shouted words from Pakistan team press officer PJ Mir reverberated through the bar at the Jamaica Pegasus Hotel in Kingston, startling the clientele of mostly sports journalists and team officials.

The “Murder” he was referring to was that of Pakistan Cricket coach Bob Woolmer who had been found dead in his hotel room the morning after the Ireland had shocked the cricketing world by knocking his team of superstars out of the tournament. 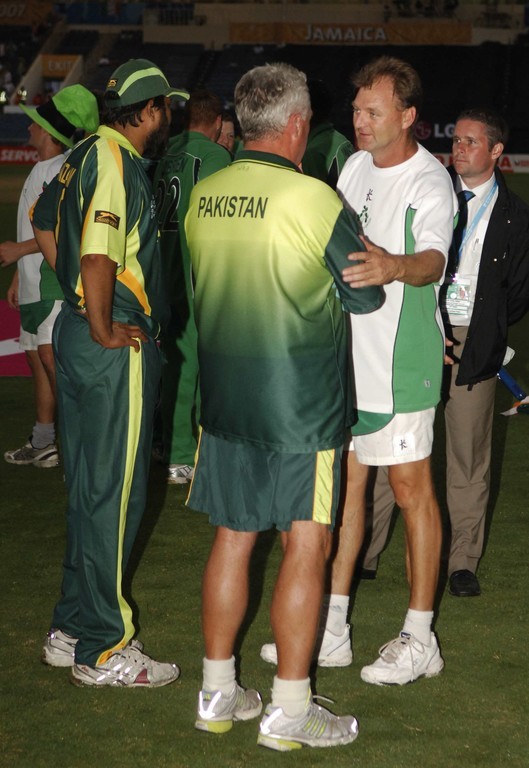 I was one of the handful of Irish journalists in the Caribbean covering what was supposed to be a two-week story with the quirky angle of Ireland in its first ever world cup taking on the giants of world cricket including Pakistan on St Patrick’s Day.

10 years on I find myself asking how it all really happened.

A Cricket World Cup upset turned into an international murder story that dominated world headlines for that crazy week in March 2007.

I was sports editor of Newstalk, out there largely because I had covered the up and coming performances of the Irish Cricket team under their understated and excellent coach Adi Birrell for a number of years previously.

Along with everybody else, I had thought Ireland would be there for the two weeks, possibly wining one game before being soundly beaten by Pakistan and the West Indies.

I figured that alongside filing reports for our sports bulletins on the day of the game I might have featured on one, maybe two of the current affairs shows as a novelty St Patricks Day story and that would be about it.

24 hours later my phone was in meltdown, I think I had been on most of the independent radio stations in the country and was writing a column for ESPN.

And that was before Bob Woolmer.

If you’ve never been close to a major international breaking news story and seen a press pack at close quarters, then it’s hard to fully appreciate what it’s like. A roving broiling 24-hour rolling news inspired mob of cameras, boom mics and Dictaphones chasing anything that moves is a sight to see.

At one point a hotel porter was mistaken for a Jamaican Police official and was surrounded by the mob who fired questions at him about the ongoing investigation.

Not for the first time that I week I overheard exasperated cricket reporters shouting down the phone to their editors in London;

The atmosphere in the Pegasus changed from the bustle of a World Cup team hotel to that of a militarised zone once the Deputy Commissioner of Police Mark Shields confirmed the death was being viewed as suspicious.

Armed police officers and army personnel operated the lifts and were present on every floor of the hotel. The Jamaican PM Portia Simpson-Miller carried out a very public visit to console the Pakistani Squad, TV cameras in tow to film her tears.

I remember feeling sorry for the huge brooding figure of Pakistani captain Inzamam Ul Haq.  He had made a bad misstep in calling a press conference at which he announced his resignation as team captain. It came off as callous and uncaring in the light of Woolmer’s passing. 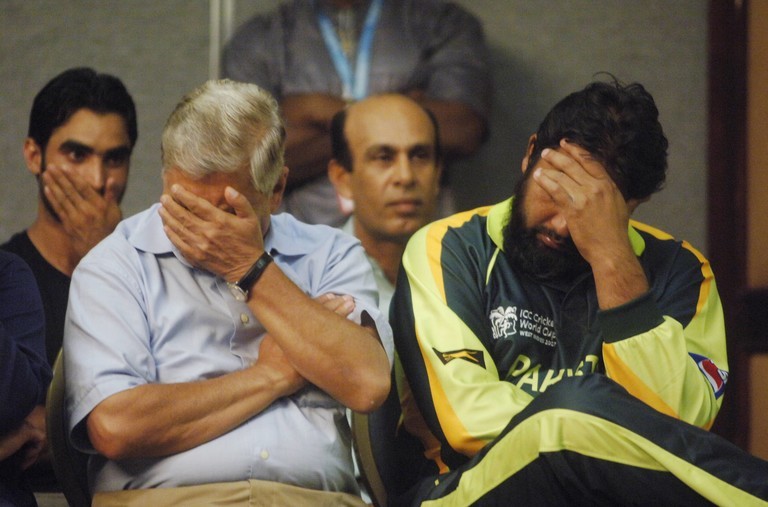 Looking back now that verdict comes off as harsh. Here was a cricketer caught up in trying to deal with the fallout of a humiliating loss and the very real public anger back home (A large crowd had burned effigies of him and Woolmer in the immediate aftermath of the loss to Ireland outside his house in the Pakistani city of Multan chanting “Death to Woolmer, Death to Inzamam”). Then he was to lose a man who was his friend as well as his coach in such a shocking a way and now to have his team embroiled in a very public murder investigation with a roving press pack watching every move in the team hotel.  It wasn’t what someone regarded as the greatest batsman in his country’s history coming to the end of his career deserved.

His trouble was compounded by his press officer Mr Mir who right from the off, set the rumour mill going with declarations to the press and intimate details of the scene of Woolmer’s death in his hotel bathroom.

Not that we needed much prompting – Asian betting syndicates exacting revenge for huge losses, suicide, snake venom and 100 other theories floated around the hotel lobby on different days. 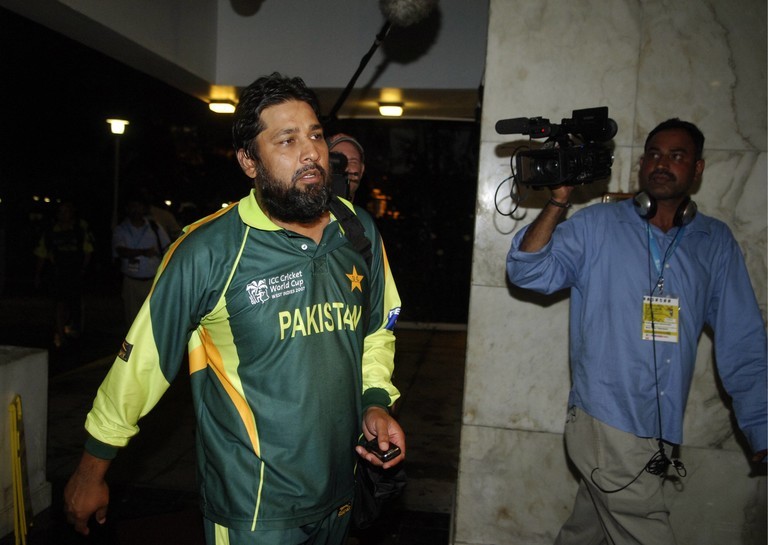 It was a crazy, unfathomable situation, but it doesn't take away from the performances of the Irish team.

A squad made up of postmen, farmers, fabric salesmen and teachers led by captain Trent Johnston and coach Adi Birrell in the most magnificent way through it all.

On that day of days for Irish Cricket (and there have been some great days since), years of work, application and bloody mindedness paid off in beating a top ranked team and thus qualifying for the super eight section of the tournament which meant four more weeks of cricket against all of the top sides.

It featured great batting (stand up Niall O Brien with 72 runs), incredible catches (including one diving effort from Johnston in which he injured his shoulder for the rest of the tournament), and a greener than green wicket which played its part in leveling the playing field for the Irish bowlers.

Kyle McCallan, Boyd Rankin, Jeremy Bray, Dave Langford-Smith, Niall and Kevin O Brien would all become well-known names in Irish sporting circles. They went on to suffer defeats to the top nations while giving England a bad scare in Guyana before beating Bangladesh. 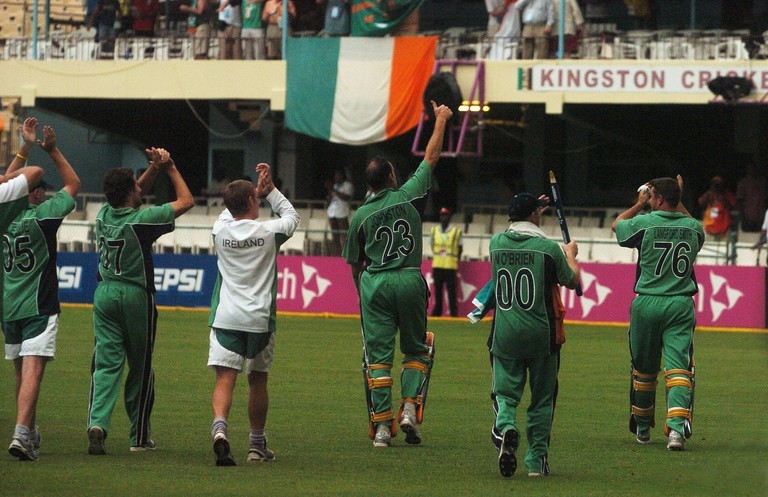 One of the features of covering their story was the access and openness afforded to the press, something long since gone from sports reporting in Ireland. You walked amongst them and got real, articulate and interesting answers to your questions.

This was in no small part due to the wider team management of Roy Torrens and PRO Barry Chambers who were professional and efficient while taking everything that was happening in their stride.

The Irish press pack was a combination of long standing knowledgeable Cricket reporters such as Ger Siggins of the Sunday Tribune and Richard Gillis of the Irish Times, interlopers like me, Emmet Riordan of the Irish Independent, John Kenny of RTE, Austin O Callaghan of BBC NI and Ian Callender of the Belfast Telegraph, and Paul Davey a young Sligo film maker then living in Sydney who took a punt and brought his camera a long to film the Irish squad in the long shot hope that something amazing might happen.

He later produced the Breaking Boundaries Documentary which told the whole story.

My reward for the Irish team's efforts was a further two weeks covering the first half of the Super 8’s, which  included a trip to Guyana, the poorest nation in the Caribbean. I got to spend amazing night in the world-famous Demerara Cricket Club in Georgetown, home club of Shivnarine Chanderpaul, Lance Gibbs, Roger Harper, Carl Hooper and Ramnaresh Sarwan. Ireland were one of the big stories of the World Cup, a tournament played in the spiritual home of cricket. Think what Brazil are for soccer for reference, and for Pele think Brian Lara.

This really was a sin, especially in the West Indies where raucous fans, music, dancing and sideline chicken jerk BBQs were part of the cricket culture.  All were restricted in the name of sponsors. Pricing match tickets at the equivalent of a month’s salary for most locals proved to be a disaster and something that was rescinded later on when people got tired of seeing embarrassingly empty stadiums across the cricket mad islands.

One of the memories that is most vivid for me was the sight and sound of the Irish Cricket faithful in Sabina park singing as the Pakistani top order batsmen were being bowled out in quick succession – “arrrreeee you England in disguise?” As I wrote for ESPN that day 10 years ago: who’d have thought they would have had the chance to have the temerity for such a chant… 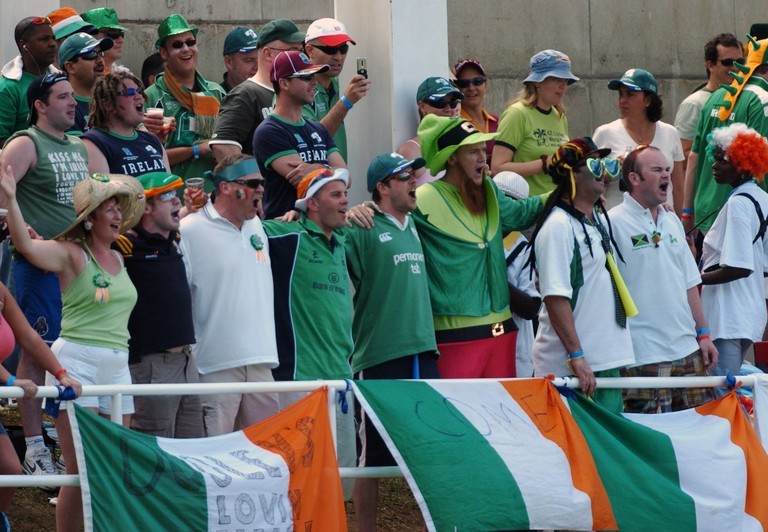 10 years on Irish Cricket is edging closer to full test nation playing status and all of the money and development opportunities that that will entail.

They went on to beat England at the following world cup with Kevin O’Brien lighting up the tournament by scoring the fastest one day century in history.

So, what really happened Bob Woolmer that night? Conspiracy theories still abound but the following November, an 11-member jury in Jamaica recorded an open verdict on his death after deciding that there was insufficient evidence of either a criminal act or natural causes.

One thing that is certain is that Woolmer was a real loss to the sport, regarded as a gentleman by press and players alike.  A man who revolutionised coaching and who ironically spent many years developing cricket in associate nations like Ireland so that they could one day compete and beat top ranked sides.