Russian Leaks Contradict Claim Bradley Wiggins Made In His Autobiography

Tour de France winner and four-time Olympic gold medallist Bradley Wiggins might have some questions to answer in the light of Russian hackers' publication of Therapeutic Use Exemptions relating to numerous high-profile athletes.

Therapeutic Use Exemptions, or TUEs, are something an athlete can apply for to their national anti-doping body or international sporting federation, with the approval of a doctor, in order to allow them to use substances on WADA's banned list to treat a medical condition they have.

Fifty-three of Team GB's squad of 366 athletes for the Olympic Games in Rio had requested an exemption form from UK Anti-Doping.

As the 'Daily Mail' reports today, Wiggins' prescriptions of one particular drug on the site - triamcinolone - directly correlate with his appearances in three Grand Tours.

Wiggins was given a TUE for the drug, used to treat respiratory problems (Wiggins has asthma and an allergy to pollen), a few days before both the 2011 and 2012 Tours de France (which he won in 2012) and in 2013 days before the start of the Giro d'Italia, where the Londoner dropped out after the thirteenth stage owing to a chest infection. 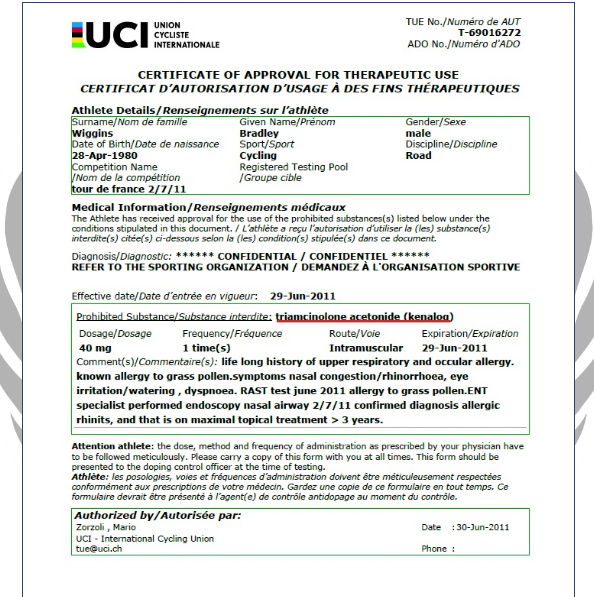 Wiggins was also prescribed salbutamol, formoterol and budesonide through TUEs across the course of his career. All of these are used for asthma and respiratory problems (Wiggins suffers from asthma).

And, while the use of TUEs is completely above board, and there is no suggested impropriety on Wiggins' part whatsoever, it is claims he made in his 2012 book 'Bradley Wiggins: My Time' that have caused eyebrows to be raised slightly regarding the TUEs. This is because triamcinolone is applied in an "intramuscular" fashion, according to the certificate - in other words, via injection. Wiggins' book would seem to contradict his use of the drug before the 2011 and 2012 Tours (the book was published in November 2012):

British Cycling have always had a no-needle policy, it’s been a mainstay of theirs; so it was something I grew up with as a bike rider. In British cycling culture, at the word ‘needle’ or the sight of one, you go, ‘Oh shit’, it’s a complete taboo...I’ve never had an injection, apart from I’ve had my vaccinations, and on occasion I’ve been put on a drip, when I’ve come down with diarrhoea or something or have been severely dehydrated.

Wiggins' use of the TUEs can be legitimately and easily explained. The seeming contradiction between his book and the TUEs, perhaps not so much.