Boylan won the medal in the points race, adding to the bronze medal won by Ireland's Mark Downey in the men's equivalent event on Friday.

"That sort of racing suits me because I know I can just dig deep," Boylan told BBC following the race.

"It's something the Irish always say, we push ourselves so hard in training. It still hasn't sunk in that I've finally done something on the world stage. It's a big boost in confidence for me, for sure.

"I kept taking a sneaky look up at the board. I was like, 'Oh my God, you need to move up there.' The legs fell off a bit in the last couple of laps.

"I can't believe I got a silver medal. I'm over the moon."

Boylan, who had been in the gold medal position late in the race, finished just a single point behind Australia's Alexandra Manly and two points ahead of Kirsten Wild of the Netherlands in the bronze medal position.

Ireland's only other previous female medallist at the World Championships was also in the points race. That was Caroline Ryan, who won bronze in 2012. 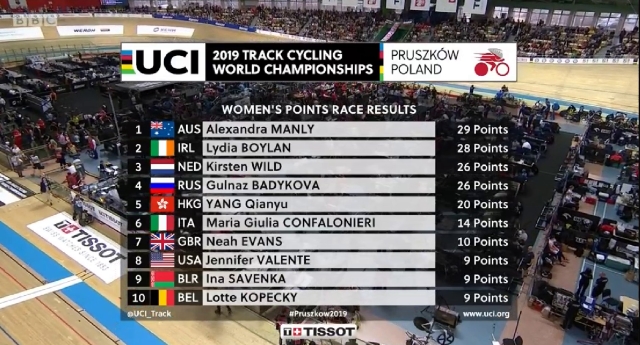