13 Big Name Players That Were Eligible To Play For Ireland

Ireland have benefitted from the 'granny rule' more than any other country. Some of the best players to pull on the green jersey have qualified for the country via this method.

However, there have been some missed opportunities.

Some massive names for one reason or another failed to play for Ireland despite qualifying to do so. Here are some of the most notable ones.

(As a side note, we have excluded the likes of Jack Grealish, Declan Rice, and Michael Keane, all of whom previously played for Ireland at some level.)

Harry Kane has strong roots in Galway, with his paternal grandparents hailing from the county. He spent some time in Ireland as a youngster but claims he never gave much thought to pulling on a green jersey.

However, Martin did say back in 2015 that Kane's agent had approached the FAI to say that the striker was interested in playing for Ireland (h/t Daily Mail):

The order of events is that initially the agent got in touch and said that he would have a keen interest and we wanted to go and chase it up...

Sometimes what agents do is they have someone who looks after the player who is not actually licensed to buy or sell or be involved as an agent but they look after the player. And he was the one who called.

But he happened to call me on a day when Harry Kane said he wanted to play for England.

It would have been really nice, absolutely. There’s a fairly decent chance he might have had a few caps for us before he actually makes his debut for England, considering the way he’s playing.

Unfortunately for Ireland, his breakthrough at Spurs and subsequent England call-up would call arrive soon after. 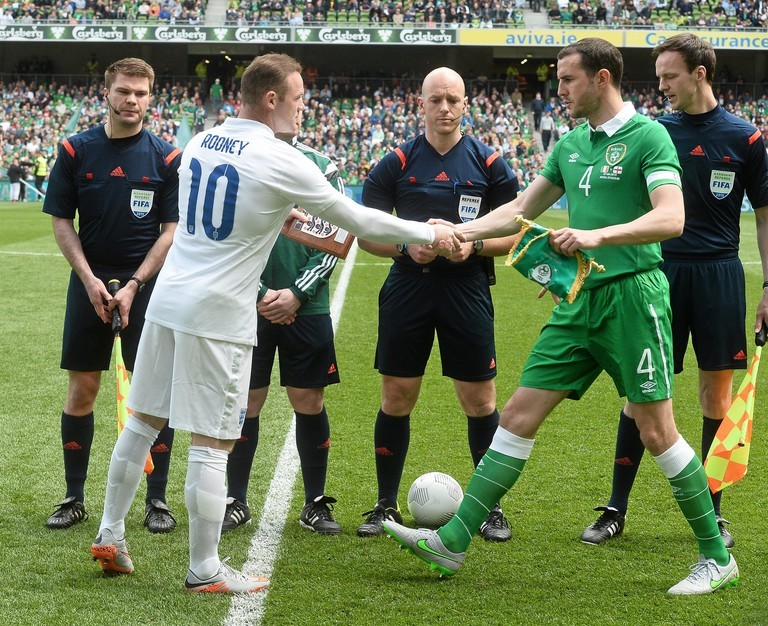 A well-known one at this stage, but Wayne Rooney qualified to play for Ireland through his paternal grandparents.

It was never likely, with the player saying back in 2015 that he never even considered declaring for the country despite the attempts of Lee Carsley and the FAI to recruit him a 16-year old. He would have been a handy man to have up front.

One a bit further back here, but Manchester United legend Pat Crerand had very strong Irish links. Born in Glasgow to Irish parents, he would even become involved in Northern Irish politics during The Troubles.

On the pitch, he would start out at Celtic before winning two league titles and a European Cup at Manchester United. He would also win 16 caps for Scotland.

Unfortunately, players of Irish descent were rarely pursued by the FAI during this period so he was always unlikely to play for Ireland. In fact, his Manchester United teammate Shay Brennan would become the first 'granny rule' player to play for Ireland in 1965.

Scholes revealed back in 2015 that he had the option of playing for Ireland thanks to his maternal grandmother, while he was also eligible for Northern Ireland.

The player himself said he had little interest in playing for anybody other than England. 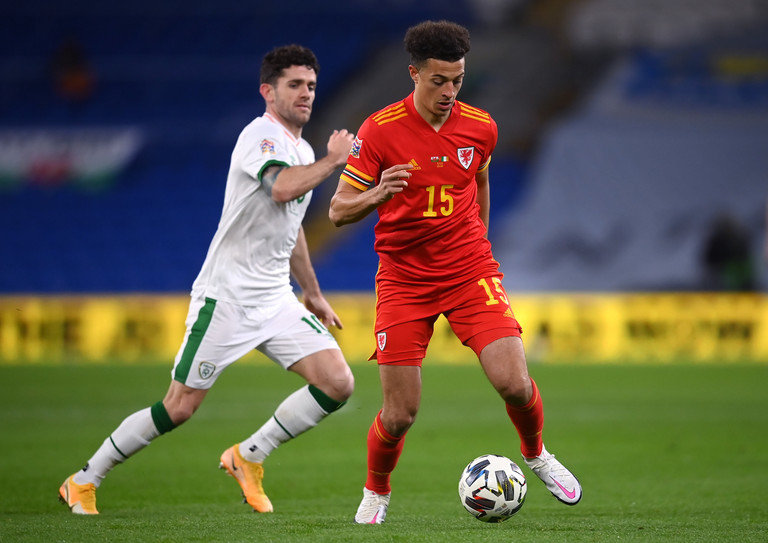 A more recent one, Ethan Ampadu created something of a stir on the international scene when putting in some brilliant performances for Chelsea at youth level.

Born in Exeter, he was also eligible for Wales, Ireland, and Ghana. His father Kwame actually played for the Ireland U21 side back in the early 90s having been raised in Dublin, but Ethan said his heart was always set on lining out for the Welsh.

The most iconic England player of the 1990s, Gascoigne actually came agonisingly close to playing for Ireland.

He qualified for the country through one of his grandparents, with Jack Charlton making an approach to the Geordie in 1987. However, he would be called up by the England U21 team the very next week.

Charlton later said that he feels he would have been an Ireland player if he approached him slightly earlier.

The problem was getting him to play for Ireland and if only I’d spoken to his mother a week earlier, I might have had the chance.

He actually qualified to play for Ireland but no one knew it at the time and we only just missed out on him.

He would have been some addition to that Charlton era team.

A stalwart in English football for 15 years, Australia international Lucas Neill qualified to play for Ireland through his father's side of the family.

However, he would be capped by the country of his birth at 18-years old so was presumably never pursued by the FAI.

A player who was linked with Ireland for a number of years, Callum Wilson's international future was put beyond all doubt in 2019 when he featured in a Euro 2020 qualifier for England against Montenegro.

Martin O'Neill watched the player a number of times during his time in charge in hopes of persuading him to come on board, although a couple of serious injuries halted any process.

His goalscoring exploits in the Premier League meant he soon looked out of reach.

One of the greatest England players of all-time, Jimmy Greaves scored a remarkable 44 goals in 57 appearances for the country.

While it was never going to happen in his era, Greaves did reveal in the 1980s that he could have lined out for Ireland thanks to his grandparents.

His comments came in 1986 when the news of John Aldridge's switch to Ireland had been confirmed, something the former Spurs and Chelsea man didn't quite understand for a player who had been born and reared on Merseyside.

Speaking on Saint and Greavsie, the show he had with former Liverpool striker Ian St John, he said this in response to the Aldridge news:

I think you gotta draw the line somewhere, Saint. I mean my grandparents were Irish. I was born in the East End of London. I talk like this, ‘ow can I play for Ireland?

Safe to say a switch to Ireland never crossed his mind.

He famously never won a cap for England despite captaining Manchester United, but Steve Bruce could have played for Ireland were it not for the intervention of Alex Ferguson.

The defender qualified for the country through his mother and was desperate to be part of Ireland's squad for the 1994 World Cup after an approach from Jack Charlton. However, Ferguson put an end to the idea because the then 34-year old would then be counted as a foreign player in UEFA competitions.

Big Jack Charlton rang me before USA ’94 and typical Jack said ‘I’ve just been on a train and the driver tells me your mother is from Ireland.’

I said ‘Yes Jack.’ And he said ‘Why didn’t you tell me before? I’d love to work with you. We’ve got the World Cup coming up in the USA.’

But at the time, if you were Irish then you were foreign and by that assimilated rule, I would have been a foreign player playing for Man United.

So Sir Alex put the boot into that one and said ‘you’re not going to be foreign.’ That was the end of it and I had a few opportunities but it didn’t quite happen.

His son Alex would go on to play for Ireland in a couple of friendlies, before later lining out for Northern Ireland. 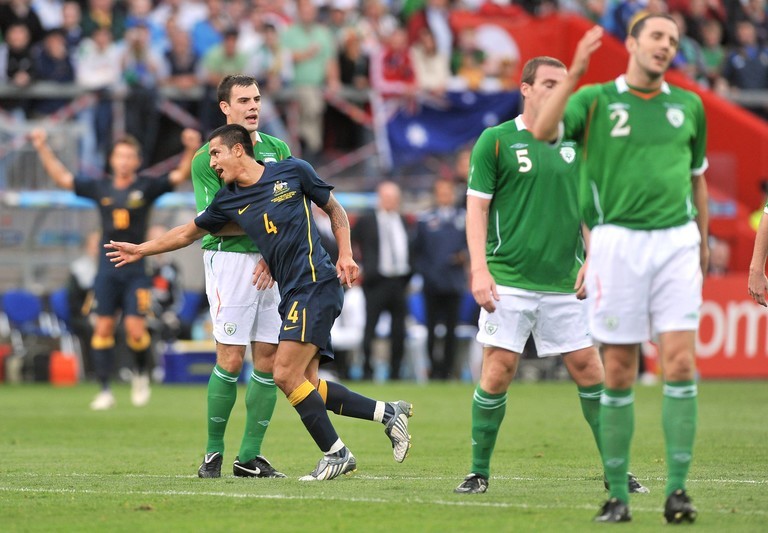 If the current FIFA rules had been in place a little bit earlier, Tim Cahill would have had a very long Ireland career.

Qualifying for the nation through his father's side of the family, Mick McCarthy approached the player when he was a 22-year old playing for Millwall. Cahill was keen, with a place in Ireland's squad for the 2002 World Cup a near certainty.

However, a Samoan U20s cap as a 14-year old a number of years previous meant he was no longer eligible to represent a different country. The future Australia legend went as far as to take FIFA to court, but was not allowed to switch allegiances.

Of course, this rule would later be changed with underage caps no longer tying a footballer to a country. By the time the law was removed in 2004, Australia had made their move for Cahill. He would go on to earn 108 caps for The Soceroos and play in four World Cups.

A player with 43 England caps to his name, Martin Keown could have lined out for Ireland.

Jack Charlton made a move for the player prior to his England debut, but he was committed to the country of his birth having already represented them in the youth ranks. This was despite the fact that he was very much in touch with his Irish roots, playing with Eire Óg club in Oxford in his younger days.

A winner of numerous honours with Manchester United and an 80-cap Scotland international, Darren Fletcher has strong Irish roots.

His mother hailed from Achill Island in Mayo, with the midfielder even attending the 2013 All-Ireland final between Mayo and Dublin.

However, there was never any indication that he would consider representing Ireland on the international stage. 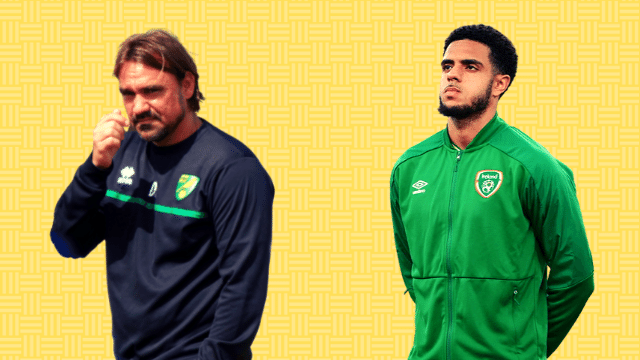 Football
3 weeks ago
By Sean Meehan
Remembering The Wonderful Scrap Between Rino Gattuso And Joe Jordan
Football
3 weeks ago
By Balls Team
Here's The Last Irish Football International From Every County In The Country
Irish Life
4 weeks ago
By Balls Team
12 Of The Greatest Pieces Of Commentary In Irish Sport
Popular on Balls
Rugby
2 days ago
By Colman Stanley
Keith Earls Shares Story That Captures Andy Farrell's Decency
Football
2 days ago
By PJ Browne
'If He Continues With Performances And Goals Like That, Stephen Kenny Will See It'
Football
2 days ago
By Eoin Harrington
Quiz: Name Every Player To Score In A Champions League Final
Football
20 hours ago
By Gary Connaughton
Portsmouth Likely To Retain Gavin Bazunu This Month Despite Championship Interest