The Black Pearl Of Inchicore - A Tribute To Paul McGrath

Paul McGrath is an Irish legend. What's more; he's my hero. Before I knew my own middle name, Paul McGrath was entrenched in my mind as my hero. My first hero. I can't explain why, or how but he is. I was a simple 6 year old just realising that there was an outside world when Paul McGrath entered my consciousness.

Paul McGrath is rightfully revered as one of Ireland's greatest players. He's had some tragic struggles in his life, but his public heroics on a football field were fantastic. He was a humble and shy player despite his legendary play. He's still a humble and shy man, and is someone Irish football is grateful to have had.

We want to take the occasion of his 55th birthday to celebrate Paul McGrath. Why is he the legend he is? Why was he my first sporting hero? Here's why: 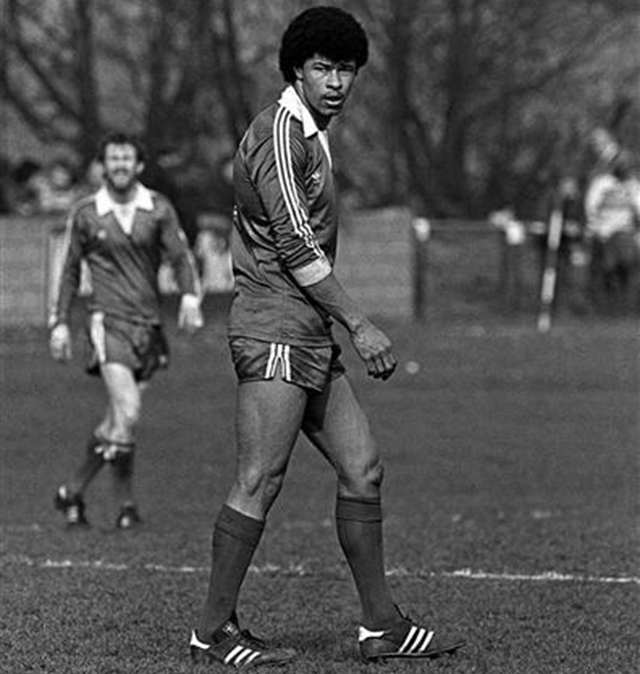 Paul McGrath's career started late. After growing up playing for Pearse Rovers in Sallynoggin, McGrath played junior football for Dalkey United. He had already come to the attention of Manchester United scout Billy Behan by the time he signed his first professional contract for St. Patrick's Athletic aged 21. He only spent a year playing for Pats. McGrath won the PFAI player of the year that year, and earned a move to Manchester United. 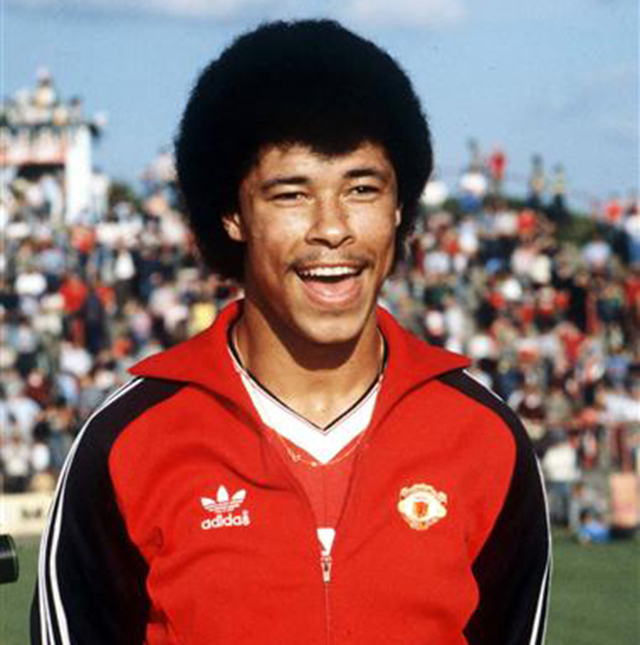 People talk about the lack of goals I scored against Man United and the reason for that was Paul McGrath, he was too good.

Paul McGrath flourished in Ron Atkinson's Man United team. Atkinson was a larger than life character, which helped McGrath settle in after taking a while to adapt to the rigourous training. The Irish contingent containing Moran, Stapleton and Whiteside also helped McGrath. McGrath had a languid style, being used effectively as a midfielder. He had deceptive pace and when moved into the centre of defense he really grew as a player.

Perhaps the highlight of his Manchester United career was his sole medal from that time. This came in the 1985 FA Cup win. The relatively inexperienced McGrath had the uneviable prospect of marking former Young player and player of the year Andy Gray. McGrath ended up with the man of the match award, after his heroics in defense once Kevin Moran was sent off. United went on to win the game 1-0 thanks to Norman Whiteside's injury time winner.

Paul McGrath: Back From The Brink

He was an exceptionally skilful and stylish defender, with marvellous innate athleticism. A man whose abilities stood comparison with those of any central defender in the game.

Things didn't go well for McGrath when Alex Ferguson took over from Atkinson at United. McGrath was starting to develop knee problems, and the pair clashed numerous times. Ferguson was full of praise for McGrath as a player, but his alcoholism was beginning to take over. What was going on behind the scenes is captured in his autobiography "Back From The Brink" which remains one of the most captivating autobiographies you'll ever read. It won the inaugural William Hill Irish Sports Book Of The Year in 2006, and countless other awards since. 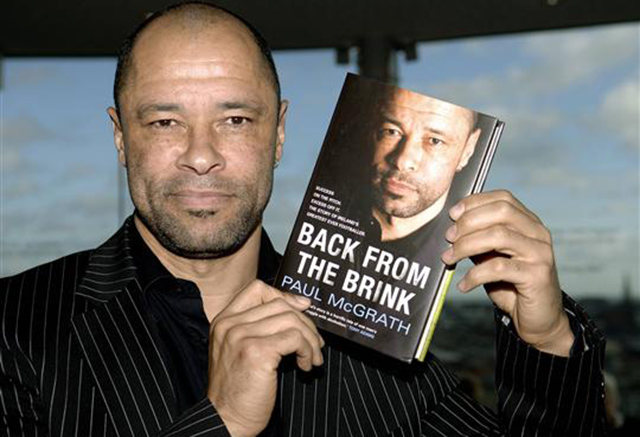 Ferguson was out to change the culture of Man United, and unfortunately Paul McGrath was one of those sold. McGrath later credits Ferguson with helping him get his career back on track. McGrath said, "Alex did me a favour in the end in making me wake up and realise I had to put football first." Despite interest from Napoli, McGrath was sold to Aston Villa, where he would later be reacquainted with former boss Ron Atkinson. By now McGrath was becoming a national hero for Ireland though. 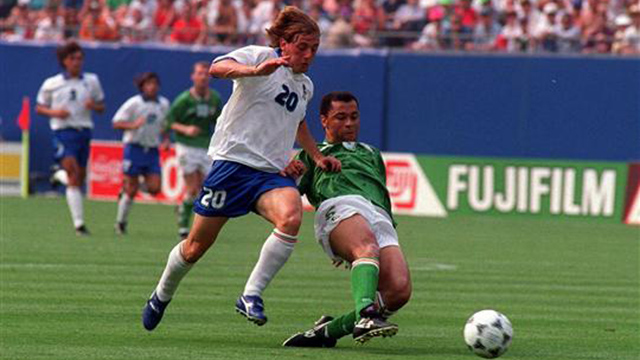 Paul McGrath is one of the all-time greats. Someone to compare to Bobby Moore. He's one of the best players I ever had.

Paul McGrath made his international debut in 1985 against Italy. He twice won the Irish International Player of the year, in 1990 and 1991. He was often the most influential player on the Irish team, at a time when Ireland weren't short of quality players. Andy Townsend summed up how the big man was regarded by the  squad:

Not only was Paul a hero to the Irish nation, he was a hero to every single one of us who played with him on the Ireland team.

McGrath will be most remembered for his star turn against Italy in the 1994 world cup. Ireland shocked the team that would end up in the final that year winning 1-0. McGrath, playing through a painful shoulder virus, was outstanding, keeping a shackle on Italian superstar Roberto Baggio.

Paul McGrath finished his career with 83 caps and 8 goals, finishing as Ireland's most capped player at the time. He remains in the top 10 for most Irish caps, and will be remembered as the first black captain of his country. 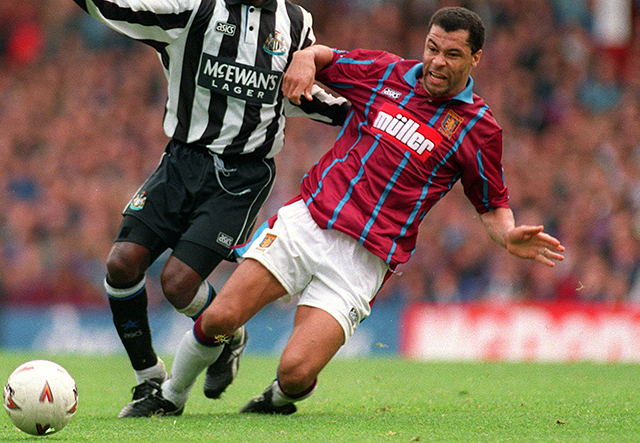 It was his move to Aston Villa when he really took off. Villa finished 2nd in the league in McGrath's first season in 1992. They struggled the following season after manager Graham Taylor departed. Paul McGrath however, was flourishing. The next season, when he was reunited with Ron Atkinson, McGrath was honoured with the PFA Player of the Year for 1992-1993. He was only the second Irishman to win the award after Liam Brady in 1978-79, and the third ever after Roy Keane in 1999-2000.

Paul McGrath was revered by Aston Villa fans, especially after he lead them to the League Cup defeating former club Man United in the final. Due to his commitment and supernatural ability to read the play, he was nicknamed "God" by many Aston Villa supporters. He is immortalized by the Villa fans with the chant "Paul McGrath, my Lord" to the tune of Kumbaya

Paul McGrath finished up his Aston Villa career with two league cup medals after 252 appearances for the claret and blue.

From there, Paul McGrath was continually suffering from his persistent knee injury. He played for Derby County and Sheffield United following his exit, only managing 38 appearances combined for the two clubs. 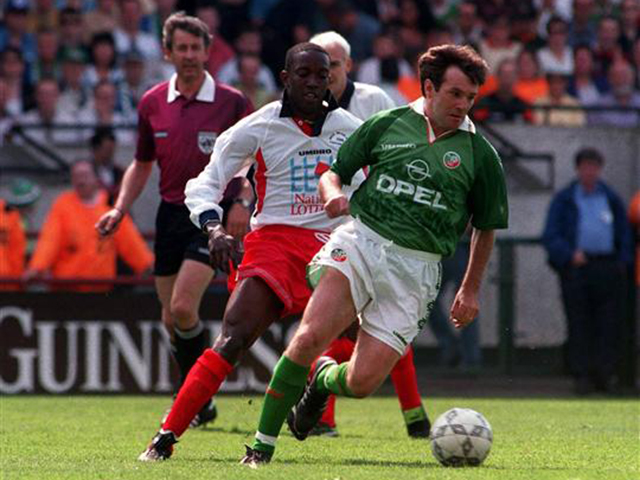 The first sporting event I ever went to was his testimonial. I was delighted when he finally came on the pitch with 5 minutes to go. That made my day as a 7 year old in the crowd. I felt guilty for that wish when I later read his book, but I was young. I was also delighted to learn later, that my next hero, Dwight Yorke was playing that day. Who knew?

I find it sad to think of all the troubles that he's been through, all those dark times. Paul McGrath is a troubled genius. A fantastic footballer on the field, a gentle and humble man off it.

These are only some of the reasons why Paul McGrath is so revered.

The man. The hero. The chant.

The Ultimate Unsung Hero – A Tribute To Denis Irwin