United Celebration & City Humiliation: 1995/96 Was A Mad Season In The History Of The Manchester Clubs

It is 25 years on from the 1995 / 96 season, which is rightly looked back on as a vintage season from the Premier League archives. Where the two Manchester clubs found themselves on the final day of that season could hardly be more distant from the dynamic that exists between the two clubs now, with City’s current lead at the top rendering the outcome of this weekend’s Manchester derby largely irrelevant to the title race.

In the Premier League era, 17 of the 28 titles have gone to Manchester, making it the most dominant city in the recent history of English football. This dominance is thanks largely to the success of Manchester United under Sir Alex Ferguson, who won 13 of those titles. City’s more recent haul of four league titles (most likely to become five at the end of this season) would have seemed a fanciful notion during the first wave of United’s success under Ferguson.

1995 / 96 was one of the defining seasons in the story of Ferguson’s United. Having lost the title on the final day to Blackburn a year earlier, United were out to re-claim their spot at the top of the English game. The season began with the infamous “you can’t win anything with kids” line that has followed Alan Hansen around ever since. Ferguson was being questioned for his decision to offload proven winners Mark Hughes, Andrei Kanchelskis and Paul Ince while entrusting a group of academy youngsters including Beckham, Scholes, Butt and the Neville brothers.

Kevin Keegan’s Newcastle had taken the league by storm and raced into a commanding lead at the top of the table. They won 20 of their first 26 games, which to put it into context, is one more win than Man City had managed at the same stage this season. Newcastle’s 12-point lead in January 1996 became the largest ever lead at the top for a team that failed to win the title, and Keegan’s iconic “I will love it” rant has come to define his side’s collapse. Man United showed a killer instinct during the run-in that ultimately vindicated Ferguson’s belief in the young players that he brought through, but Eric Cantona was the real difference-maker for United that season. 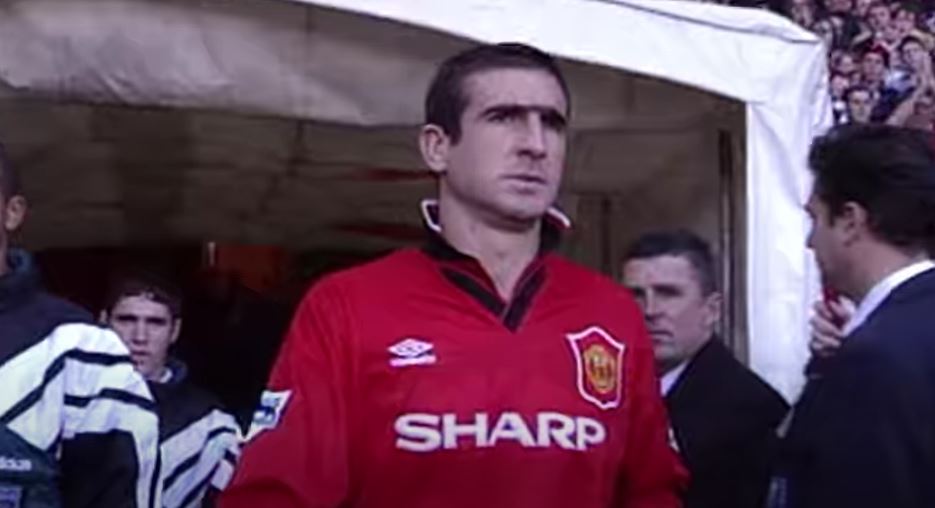 This was Cantona’s comeback season after serving a nine-month suspension for his infamous ‘kung-fu kick’ on a supporter at Selhurst Park. His first match back was against Liverpool in October, and his presence during United’s title charge at the business end of the season proved decisive. During the run-in, Cantona scored United’s only goal in six different games, which secured 16 crucial points in the process. He was immense and his performances that season cemented him as United’s talisman, while driving the team on to a 2-point lead at the top as they made their final day trip to Middlesbrough, knowing a win would guarantee the title.

The winning mentality that Ferguson had instilled at United could not be found at their closest neighbours. England World-Cup winner Alan Ball had taken over as Manchester City manager at the start of the season, with the club having survived a relegation battle the previous year, finishing 17th in a 22-team league. City were a team in transition, with some older players being ushered out to make way for youth. Irish fans north and south will remember this City side featuring the likes of Niall Quinn, Alan Kernaghan and Steve Lomas.

This was also the debut season of Georgi Kinkladze, signed from Dinamo Tbilisi off the back of some impressive performances for the Georgian national team, including a 5-0 victory over Wales where he earned rave reviews. Kinkladze remains a cult hero among City supporters for the magic he brought to an otherwise dreary season for the club. His solo goal against Southampton was a goal of the season contender and one of the highlights at Maine Road that year.

But despite the wizardry of Kinkladze, City struggled from the start – failing to win any of their opening 11 games and finding themselves deep in the relegation dog-fight. An improved second half of the season kept them in the hunt for Premier League survival, and going into the final day, they sat level with Southampton and Coventry City on 37 points, knowing that one of the three sides would be relegated. City hosted Liverpool, and their inferior goal difference meant that they needed a better result than either one of their relegation rivals to stay up.

The first-half couldn’t have gone much worse for City, as a Steve Lomas own goal and Ian Rush’s last ever goal for Liverpool left them 2-0 behind. But they rallied in the second half, as goals from Uwe Rosler and Kit Symons brought them level going into the final 10 mins. Both Southampton and Coventry’s games remained scoreless, meaning that City needed a win to stay up. But what happened next is still remembered to this day as one of the more embarrassing moments in the club’s history. 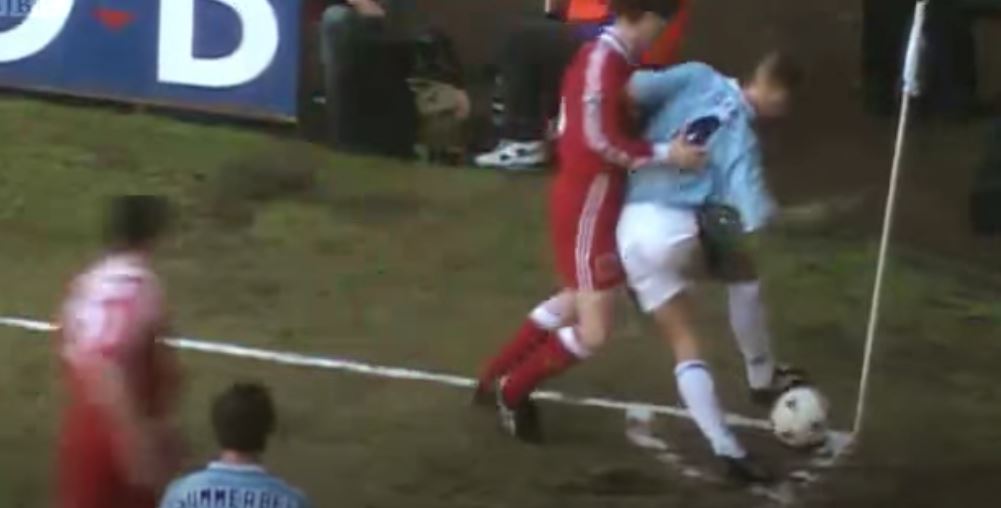 Before the age of smartphones and ubiquitous technology in football stadiums, word of mouth in the stands at Maine Road led to a false claim that a draw was enough for City, and amazingly - this fed onto the pitch. The City players began playing the game out for a draw, retaining possession in the opposition half and making no advances to try and score a winner. The image of Steve Lomas holding the ball up in the corner as the clock ran down on City’s Premier League status has gone down as a tragically comic depiction of the club’s reputation at the time.

In a recent interview with BBC 5Live, former City striker Uwe Rosler described how events unfolded on the pitch.

We got the equaliser at a pretty good time, there was only 12 minutes to go, so immediately - obviously we did our homework before the game and we thought, the players thought - we needed a draw and it could be enough. All the reaction we got from the crowd and from the sidelines is 'come on, get it over the line, play the result, be clever, manage the result', and that's what we did.

We tried to waste time, we kept the ball in the corners instead of attacking. Niall Quinn was in the dressing room following the BBC results at the time and came out with a towel around his waist and told us - screamed at us - to attack because we needed a goal. So that was how I remembered the situation. (Quinn) came through the tunnel and then obviously the coaching staff took over and they realised we needed to score at least one more goal and we started attacking again but the time was running out for us unfortunately.

It's difficult to say (if we would have got another goal). I think Liverpool didn't play for the Championship at the time, so I felt they were in no-man's land as far as I remember. We managed to come back from 2-0 down so that indicated that we were both right in the game. Nobody can say for sure that we would have scored the goal that (would have) kept us in the league but at least we would have had a good go at it.

Footage of the match confirms that Niall Quinn was in fact fully dressed when he re-emerged on the sideline having been substituted earlier, despite Rosler's recollection of events. The phrase ‘typical City’ has become a notion among a generation of Man City fans, born out of moments like that final day in '96, almost as a coping mechanism to laugh at their own misery. It was a notion that famously engulfed the Etihad Stadium on the final day of the 2011/12 season as City had seemingly blown the title when losing to 10-man QPR, before two goals in injury time banished the demons and launched the club on to its new chapter.

When Aguero snatched the title for City in 2012, the United players were on the pitch at Sunderland waiting to hear if their 1-0 win was enough to make them champions. On the final day in '96, they were on another pitch in the North-East, sauntering their way to a 3-0 win away at Middlesbrough that quickly snuffed out any hopes that Newcastle had of a United slip. The third goal - a brilliant solo effort from Ryan Giggs - drew spontaneous applause from the home crowd at the Riverside, almost as an acknowledgement of United's superiority as the top dogs in English football. A far cry from what was happening at Maine Road.

This title was part of Man United's second league & cup double in three seasons, and certainly one of the most entertaining title races that Ferguson was involved in. It was another step on their way to achieving the ultimate goal of winning the Champions League, which they did with many of the same players three years later. City's relegation saw them fall into a miserable yo-yo period where they bounced across the top three tiers over six seasons, before Kevin Keegan restored them as a Premier League team for the long term in 2002/03. There were another six seasons of mediocrity in the Premier League for City before the club was taken over by the Abu Dhabi United Group in 2008 and everything changed.

In the years since, a new dynamic between the clubs has emerged, and the local rivalry has developed an intensity that was sadly lacking back in the 90s when City lay in United's shadow. The intensity has been spurred on by moments like the Aguero winner against QPR. Rooney's bicycle kick. Carlos Tevez and the 'welcome to Manchester' billboard. Michael Owen and Paul Scholes both scoring injury time derby-winners for United in the same season. Mario Balotelli's 'why always me?' shirt in the 6-1 at Old Trafford. Mourinho and Pogba spoiling Pep's title party in 2018.

City hold the power in Manchester for now, and they don't look like a club that might fall back into their old shambolic ways anytime soon. But however long this current run of dominance lasts, the memories of Ferguson's United and 'typical City' will always remain an important chapter in the history of the two clubs.