From The Vault: Ireland Jet Off To World Cup, Everything Expected To Go Swimmingly

On 17 May 2001, 19 years ago to the day, the Republic of Ireland national team set off from Dublin Airport ahead of the 2002 World Cup. In an unrelated and coincidental event, the Irish public went to the polls that day to elect the 29th Dáil.

Mick McCarthy's Ireland were bound for Saipan, a small island that would act as the team's base as they prepared for the finals. Fianna Fáil would secure 81 of the 166 seats in Dáil Éireann, and form a majority government with the Progressive Democrats.

At this point, it seemed like absolutely nothing could, or would, go wrong.

It was all smiles at Dublin Airport today, as a united and happy Ireland squad took time with the press and fans ahead of their long trip across the globe to play at the World Cup in Korea and Japan.

Ireland captain and Manchester United star Roy Keane almost looked relaxed and happy throughout. He was beaming at the site of Fianna Fáil leader Bertie Ahern, who was fresh off the campaign trail for this year's General Election, and if opinion polls are to be believed, will once again lead the next government. We weren't privy to the discussion between the two leaders, but as sure as Ahern will lead the next Dáil, Ireland's progress in Japan will come down to the form of our footballing superstar. 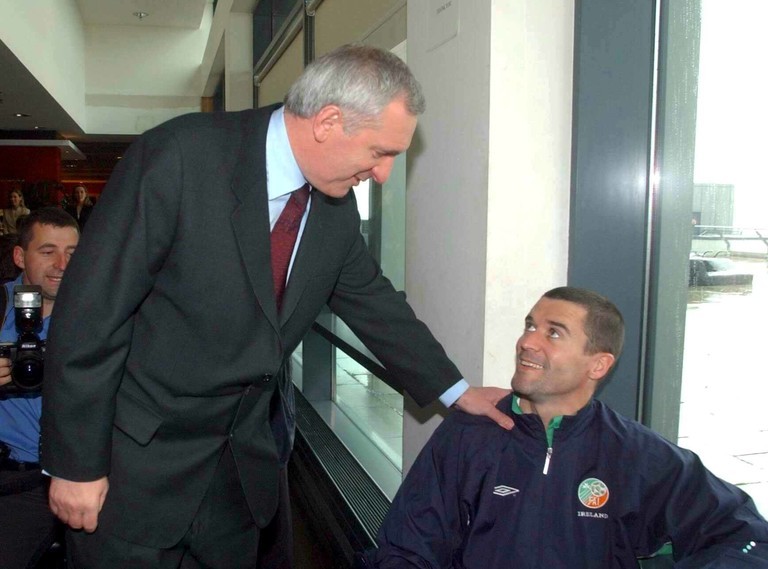 The Ireland manager, Mick McCarthy, also stopped for a photo-op with the Taoiseach, whose popularity knows no bounds. The deputies across the aisle in the Dáil will be cursing the lack of term limits in Ireland, and it seems certain at this stage that Ahern will only step down when he decides he's "a lot done, no more to do." In fact, Ahern, who didn't seem to have much else to do, seemed to pop up everywhere in airport. 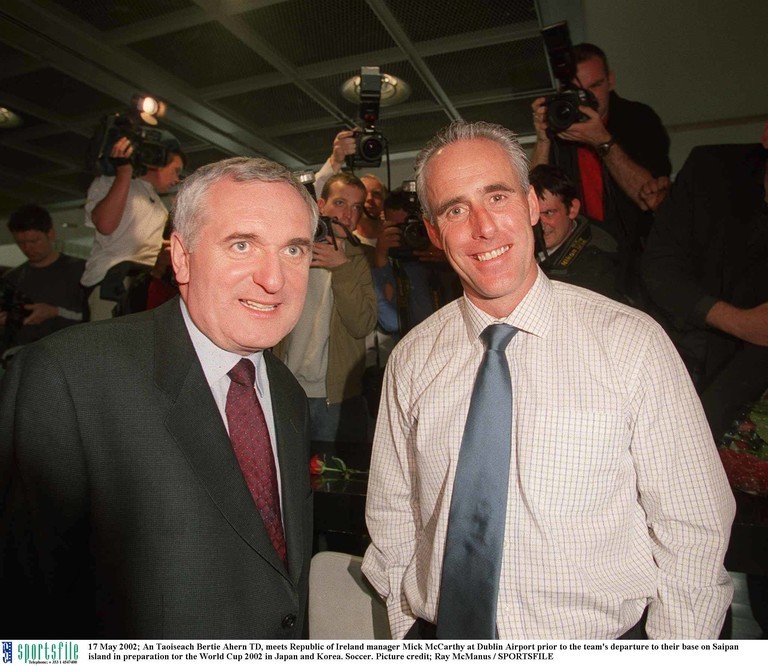 Ahern, unphased by the pressure of election day, even had time to chat with St. Patrick, patron saint, who has recently taken up a job with the Irish Sun, following the country's slow drift towards secularism. 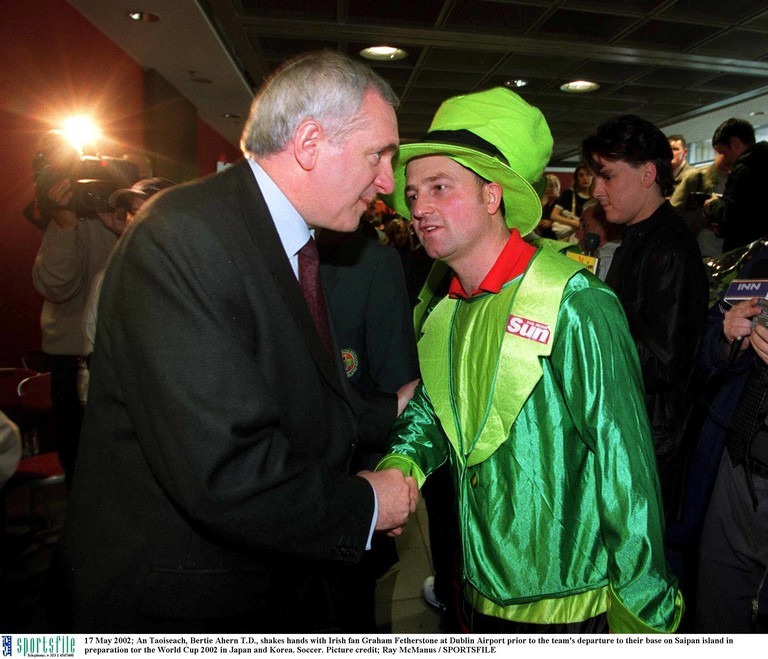 Jason McAteer, whose crucial goal against the Netherlands during Ireland's qualifying campaign helped his country reach the World Cup finals, took a moment to do some research about one of the host nations before the flight. 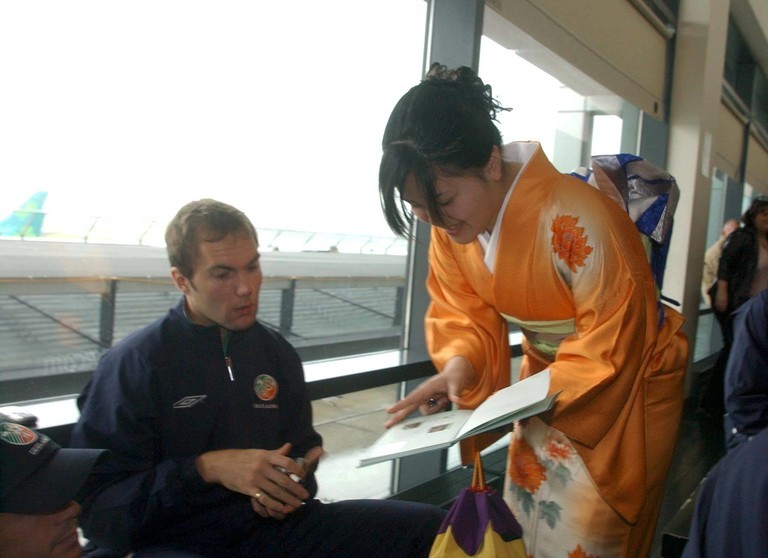 Ipswich Town stalwart Matt Holland looked collected as he spent some time with fans signing autographs. One of the players of the qualifying campaign, Holland will battle it out with Mark Kinsella for a place in the Irish midfield alongside Roy Keane. 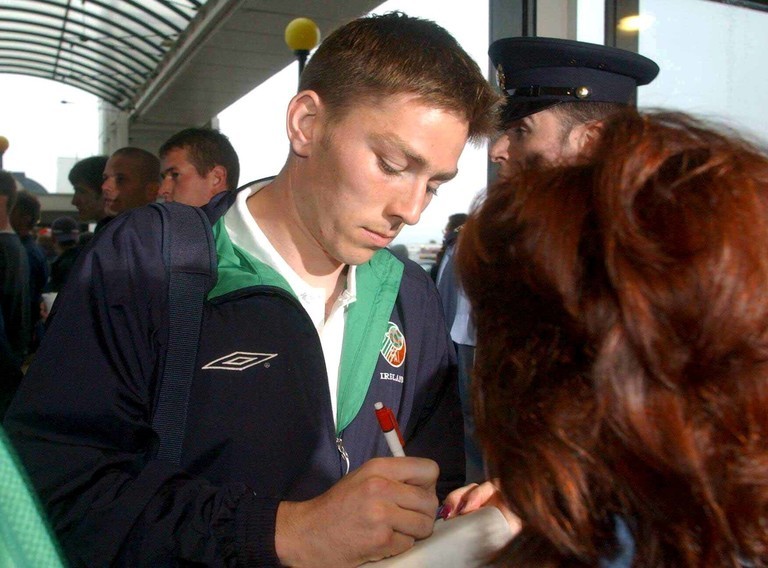 Our only concern was for Blackburn Rovers' youngster Damien Duff, who seemed somewhat overawed by the whole occasion, as he waded through eager Irish fans. We hope the big stage of the World Cup isn't too much for the young Dubliner. 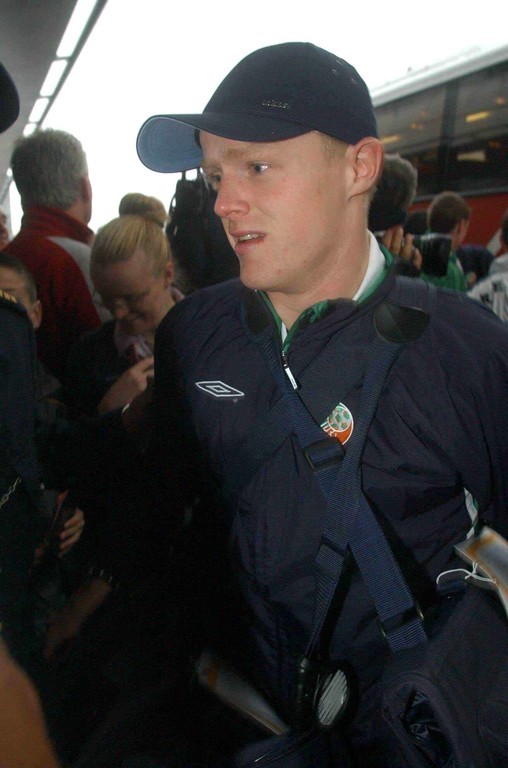 Veteran striker Niall Quinn took time out to give words of encouragement to Duff, having been there and done that in the Jack Charlton era. Only later was Quinn informed he was actually speaking to a 9-year-old fan. 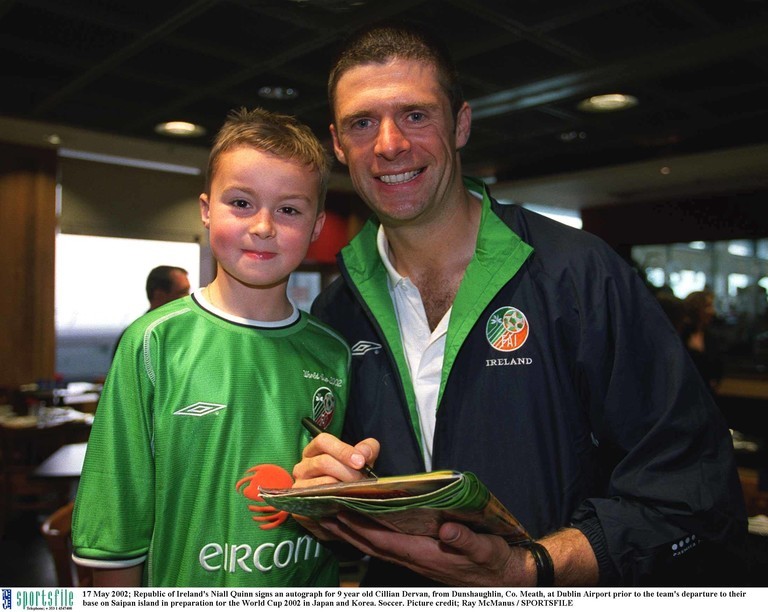 Quinn recently broke Frank Stapleton's reign as Irish record goalscorer with his 21st international goal. It's a record we expect to see stand for a long time, and wonder if he might add to the number in Japan and South Korea?

Ireland's first game of the finals will be against Cameroon next month. Mick McCarthy will have a full squad at his disposal, all going to plan.

SEE ALSO: The Irish Players' WhatsApp Group From The 2002 World Cup Has Been Found 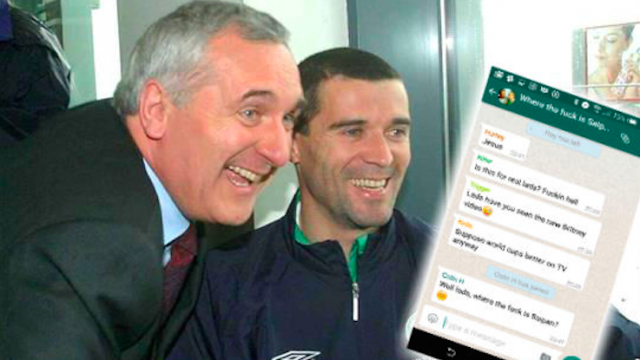 Football
2 days ago
By Balls Team
So Close But So Far Away: How Ireland Almost Co-Hosted Euro 2008 (Without A Bloody Stadium)
Football
4 months ago
By Balls Team
The Strangest Figures To Do Football Punditry For RTE
Football
4 years ago
By Gavin Cooney
Piers Morgan Bristles As Bertie Ahern Randomly Declares Himself Pro-Wenger
Previous Next

Football
2 days ago
By Balls Team
So Close But So Far Away: How Ireland Almost Co-Hosted Euro 2008 (Without A Bloody Stadium)
Football
4 months ago
By Balls Team
The Strangest Figures To Do Football Punditry For RTE
Football
4 years ago
By Gavin Cooney
Piers Morgan Bristles As Bertie Ahern Randomly Declares Himself Pro-Wenger
Popular on Balls
Football
13 hours ago
By Gary Connaughton
Report: Celtic Eyeing Move For Experienced Premier League Goalkeeper
Golf
9 hours ago
By PJ Browne
Down Golfer In Tears After Life-Changing European Tour Win
Football
14 hours ago
By PJ Browne
Schmeichel Criticises 'Ridiculous' Decision To Restart Denmark Game
Football
10 hours ago
By Gary Connaughton
Brady & Hamann Double Down On Harry Kane Criticism Despite Croatia Win