With Celtic bracing themselves for yet another visit from Barcelona, we were tempted to simply do a 'Tony Watt: Where Is He Now?'

But the answer is just 'Hearts, on loan from Charlton Athletic', so we've decided to dive further back through the annals of Hoops history to bring you the Celtic team which beat the Catalan giants in the 2003/2004 UEFA Cup, and what became of them after they ran rings around Ronaldinho and Carles Puyol. 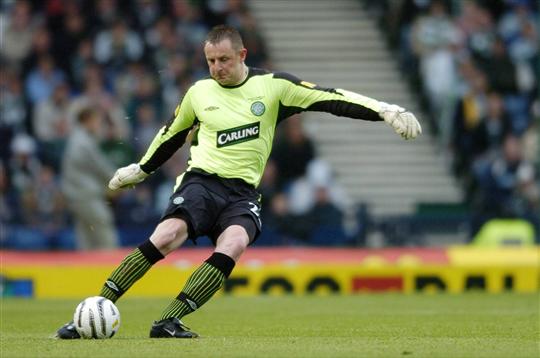 After Martin O'Neill told Douglas towards the end of the 2004-05 season that he would not be first choice for the following season, he upped and offed to Leicester on a free that summer. Spells in the English lower leagues with Wycombe, Milwall and Plymouth followed, before his inevitable return to Scotland. Leaving Dundee United on rather bad terms in the summer of 2013, Douglas was branded a 'disrespectful liar' by manager John Brown when he went to the press with tales of his mistreatment.

Following the sacking of manager Dick Campbell in December 2015, Douglas quit the Station Park side in protest.

He soon returned, however, only to be brutally attacked by two fans who ran onto the pitch after he was allegedly subjected to vile sectarian abuse. Following the brawl, both men were jailed.

Having departed Celtic for Wolves in 2005, McNamara returned to Scotland two years later where he represented Fakirk and Partick Thistle.

McNamara moved into management with Partick in April 2011, before his appointment at Dundee United in January 2013. He was sacked by Dundee United in September of last year, took over as manager of York City - where he remains today - just two months later. His side are currently languishing in 16th position in the Conference Premier.

In 2011, McNamara co-wrote an X-rated television sitcom with Scottish actor and comedy writer Fran Gilhooley called The Therapy Room, which starred Jackie's acting brother, Donny. The show is based around a young footballer who is catapulted from amateur football to the English top flight. According to the Scottish Daily Record at the time, The Therapy Room "shocked viewers with raunchy sex scenes and a script peppered with four-letter words", with one viewer exclaiming:

I wasn't expecting that. It made Footballers' Wives look like The Magic Roundabout. 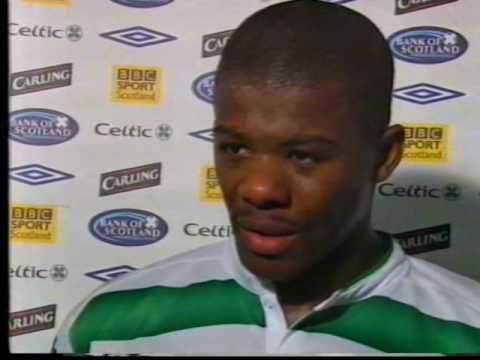 Celtic's 2002/2003 Player of the Year remained at the club until 2009 where he found appearances few and far between under Gordon Strachan.

Unfortunately for the big man, he was declared technically bankrupt that same year. He went on to join the national team set up with his native Guinea as a 'coordinator'. With the Guinean side currently experiencing turbulent times under interim boss Kanfory Lappé Bangoura, Baldé has emerged in his national newspapers as one of the leading candidates to take over. Speaking in July, the great man told Foot 224 in an exclusive interview:

If leaders want to keep Mr. Bangoura Lappé, I'll be the first to bring my support and to accompany him in his work. In the second case where the leaders would be organised around a new coach, I position myself to lead the national team.

Ill-fated spells at Sunderland and on loan at Burnley following his 2006 departure from Parkhead ensured a relatively quiet retirement two years later.

He is currently the manager of Tatran Prešov, the oldest club in Slovakia, and led his side to promotion to the Fortuna Liga - the Slovakian top flight - at the end of last season. Fair balls to ya, Stanislav. 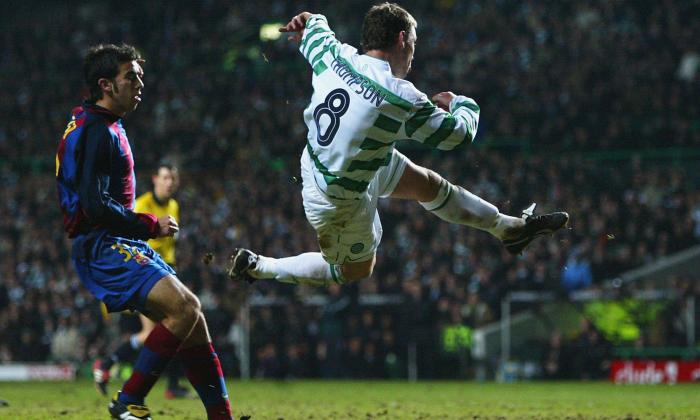 The green half of Glasgow's favourite Geordie struggled following the departure of his boss, Martin O'Neill. Condemned to at best the bench for most of Gordon Strachan's first season in charge, Thompson - once hypothesised as the answer to England's problems on the left-hand side of midfield - departed for League One Leeds United in 2007.

He returned to Celtic to coach under his old pal Neil Lennon, but was sacked due to concerns about his 'lifestyle'. He then found work at Birmingham City, but when manager Lee Clark was binned in October of 2014, Thompson followed him out the door just days later, leaving by mutual consent.

Scorer of the winning goal on that fateful day versus Barcelona, Thompson can now be found 'issuing warnings' to Rangers from the relative sanctity of almost every newspaper in Scotland. He scored seven goals and earned three red cards versus Rangers during his Celtic career. 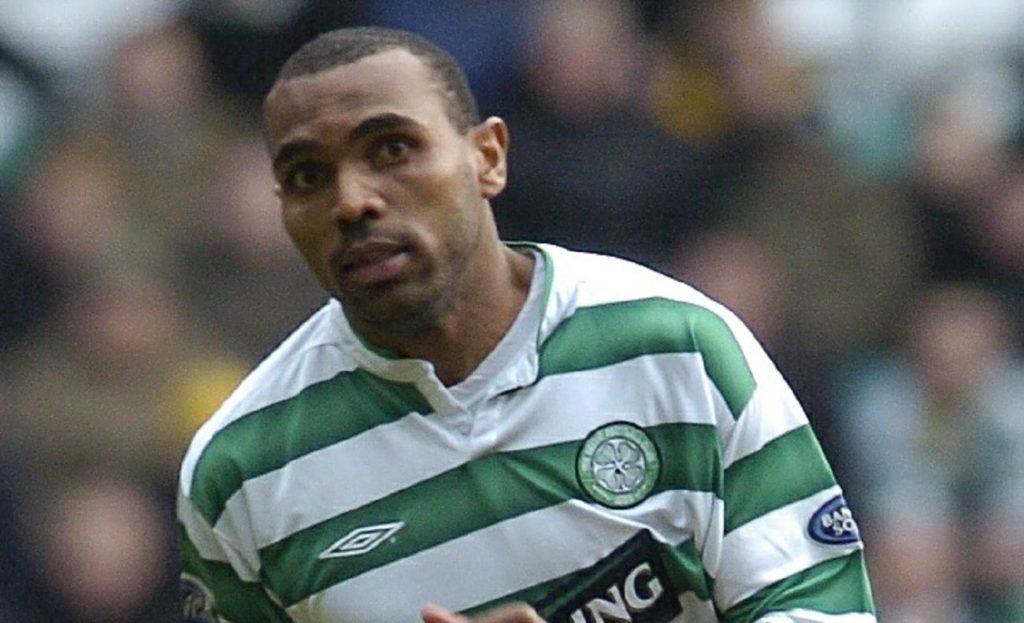 Agathe was born in Réunion, a small French commune off the coast of Madagascar. Also known as the island where Roger Milla 'retired' to and played beach football for a couple of years before he was brought back to play Italia '90, and the birthplace of one Dimitri Payet.

The ever-popular Agathe departed Celtic for Aston Villa in 2006, where he made just six substitute appearances before the Birmingham club declined the opportunity to extend his short-term deal. Aged just 31, he returned home to Réunion where he signed for his hometown club, JS Saint-Pierroise, for whom he still lines out today.

Agathe has also set up a football academy on the island, with three players - Heeking Jerome, Mathis Yohan and Jeremy Judith - all signing for Stirling Albion in 2010. 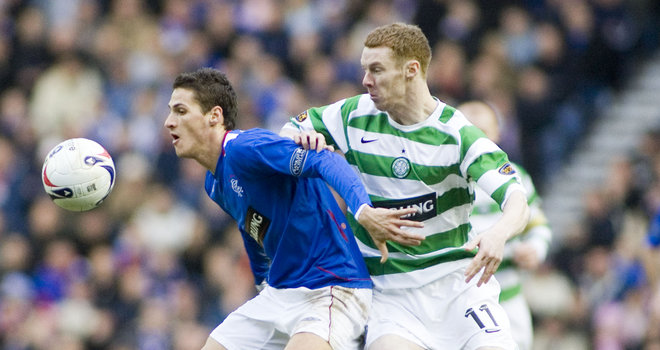 Still just 33, Pearson left Celtic for Derby County in 2007 where he netted four goals in 125 appearances. Spells at Stoke and Bristol City followed before a 2014 move to Kerala Blasters in the Indian Super League. He returned home for a two-year stint at Motherwell before his contract expired this past summer.

Where to next, then, for the 10-cap Scottish international? Back to India, of course. Pearson has just signed with the incredibly named Atlético de Kolkata.

You know the scéal with Neil. Spells at Notts Forest and an emotional reuniting with Rab Douglas at Wycombe followed his seven-year spell at Parkhead, where he would eventually return for an incredibly successful spell as manager - masterminding his own historic victory over Barcelona in the process.

Currently the manager of Hibernian after a dodgy spell at Bolton, Lennon recently shocked Irish telly-watchers with this beauty while on punditry duty on TV3. 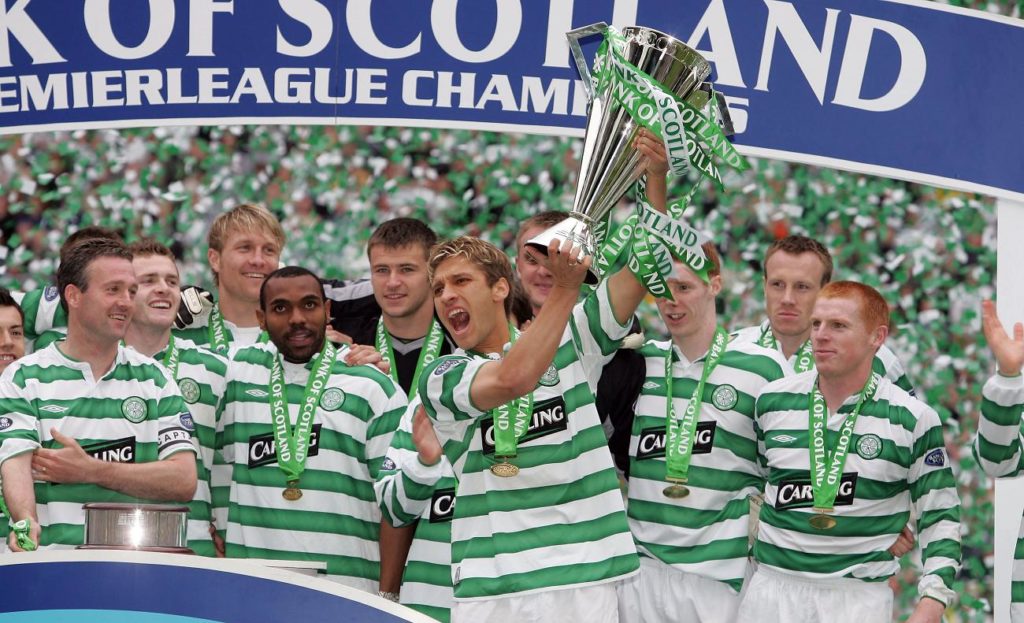 A successful transition to the Premier League where so many others have failed spoke volumes as to the talent of the Bulgarian, the defining memory of a seven-year Villa career perhaps being his scoring the furthest out recorded goal by an Aston Villa player since the club was formed - a volley from another post code versus already-relegated Derby in April 2008.

His battle with leukaemia need not be described further; he beat it because he's Stiliyan Petrov and he's a bloody champion. Now 37, the central midfielder began playing again for his local club in Birmingham in 2014. He took a coaching role at Villa the following Autumn, and this summer made his first (non-contractual) senior appearance for the club in an 8-0 friendly victory over Austrians GAK.

Took an enormous risk when he signed for Rangers in 2014. Żebbuġ Rangers that is, of Malta, and he unsurprisingly lasted just one game in the Maltese heat and fecked off back to Ayr United within a week of his arrival on a one-year deal (with the option for a further year's extension, as if it mattered). In fact he's already played for every club in Scotland, Wales and England since his departure from Celtic in 2007 - or more accurately, 14 in total.

Beattie currently lines out for Edinburgh City in Scottish League Two, and at the age of 32, can only be but three or four moves away from completing a dream move to Sporting Fingal.

A two-year stint at Barcelona saw Larsson pick up a Champions League medal, which will surely eased some of that heartache from 2003. He flourished on his return home to Helsingborgs, netting on 38 occasions in 84 games despite being, for all intents and purposes, an extremely old man while leading the line for his hometown club.

His first off-season back in Sweden was spent in Manchester, where an incredible three-month loan spell at Manchester United saw him score three times in 13 appearances, and caused United to try and extend the deal. The Hoops legend had promised his family he would return to Sweden, however, and despite turning down the loan extension earned massive praise from Alex Ferguson and picked up a Premier League medal for his troubles.

His return to Helsingborgs saw him notch what many consider to be his most famous goal, against Drogheda United in the preliminary stages of the UEFA Cup. After retiring at Helsingborgs, Larsson scored 16 goals in five games for the veterans team at his first ever club, Högaborgs - this due to an unfulfilled promise that he would play a season there before he called it a day on his pro career.

Managerial spells at Landskrona BoIS (missed out on playoffs) and Falkenberg (kept them in top flight) led him back to Helsingborgs once more, where he has been manager since January 2015. There, he manages his son, Jordan, who recently captured the hearts of Celts around the world when it was suggested he sign for Rangers.

Played the second half after Douglas' red card that night in Glasgow. His performance in the corresponding fixture at Camp Nou is widely regarded as the greatest in the history of football, if not all sports. Had a two-year stint at Norwich after the great Strachan clearance sale of 2007. Spent majority of his playing career at Cardiff but is currently a backup goalkeeper at Hull. 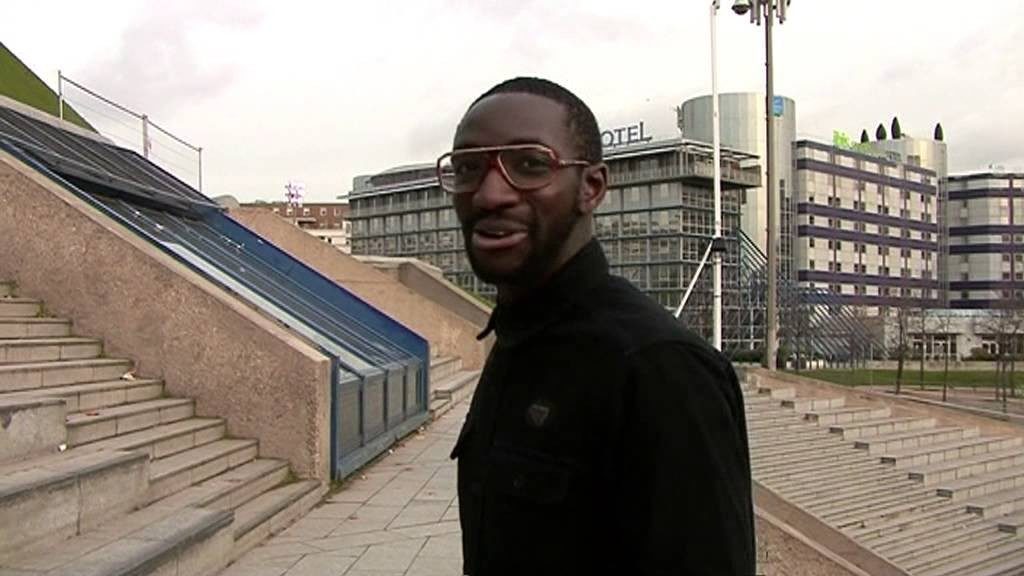 When managing Sylla at St. Johnstone, Sandy Clark is alleged to have once said: "He's so skilful. The thing about Momo is this - he doesn't even know what he's going to do, so how's a defender supposed to know?" In truth, nobody knew. The flying winger once picked up 16 yellow cards in a single season before signing for Celtic in 2001.

Following his 2005 departure, and after spells at Leicester and Kilmarnock, Sylla moved to Moldovan giants FC Tiraspol, where all further information surrounding his career was lost.

However, in 2012, Sylla convinced The Scottish Sun that he once stopped Didier Drogba from signing for Celtic, because he felt Drogba wouldn't have gotten in a side containing the likes of Henrik Larsson, Chris Sutton and John Hartson. He was right.

YOU MIGHT ALSO ENJOY: Jordan Larsson Has The Perfect Response To Rumours Linking Him With A Move To Rangers

SEE ALSO: The 2006 Celtic Team That Beat Man United: Where Are They Now?

Football
3 months ago
By Balls Team
8 Of The Best Celtic Away Jerseys From The Last 20 Years
Football
9 months ago
By Aonghus Ó Maicín
Back To '98: A Cautionary Tale For Celtic Ahead Of Bid For Ten-In-A-Row
Football
10 months ago
By Mark Farrelly
Rangers Director Asks If Awarding Celtic The Title Would Equate To "Eight-And-A-Half In A Row"
Previous Next

Football
3 months ago
By Balls Team
8 Of The Best Celtic Away Jerseys From The Last 20 Years
Football
9 months ago
By Aonghus Ó Maicín
Back To '98: A Cautionary Tale For Celtic Ahead Of Bid For Ten-In-A-Row
Football
10 months ago
By Mark Farrelly
Rangers Director Asks If Awarding Celtic The Title Would Equate To "Eight-And-A-Half In A Row"
Popular on Balls
GAA
20 hours ago
By PJ Browne
'I Have Pictures Of Stephen Cluxton All Around My House, It’s A Bit Weird!'
Rugby
21 hours ago
By Balls Team
Son Of Offaly Hurling Legend Set For Super Rugby Debut
The Rewind
19 hours ago
By Sean Meehan
Introducing The Vote For Ireland's Greatest Singalong Song
Rugby
16 hours ago
By Eoin Harrington
Rob Kearney Player Mic Gives Great Insight On Western Force Debut