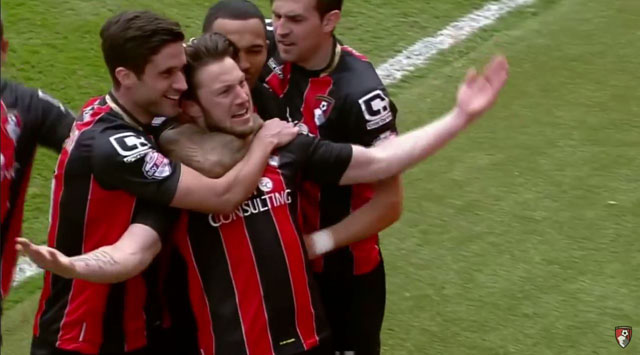 Bournemouth's 3-0 victory over Bolton on Monday night means that promotion is all but guaranteed for the club from the south of England. And they celebrated as if it was guaranteed.

But... There is one highly unlikely scenario that could prevent them from reaching the financial windfalls of the Premier League.

Bournemouth celebrating like they've completely ruled out a 19-0 defeat at The Valley on Saturday. We'll see... #cafc

Bournemouth will need to be beaten 19-0 against Charlton at the weekend in order to prevent them being promoted to the Premier League as they sit three points ahead of Middlesborough. If they do happen to get beaten by 19 goals, at least they will qualify for a place in the playoffs.

The very thought of such a result would have most people rolling their eyes but EA Sports have released a challenge to FIFA players to see if they can achieve that exact score against Charlton.

We understand that a week filled with champagne and celebrations can seriously impair your performance on the field but 19-0 is hardly possible, is it?

See Also: We Challenge You To Watch This Lewandowski And Reus GIF Without Smiling