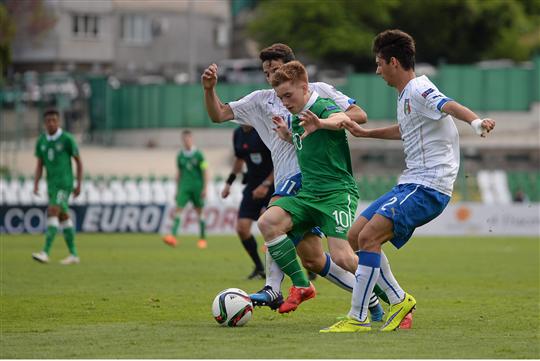 Ireland U17 were extremely impressive in their 2-0 loss to Italy U17 earlier today in the UEFA U17 Championship in Bulgaria.

The Irish team displayed some very good quick possession football. They passed the ball around with authority, but couldn't finish any of the chances that they created whilst the Italians took advantage of the two opportunities they have.

It leaves Ireland at a perilous position in trying to qualify from the group having already drawn with Holland with England to come.

Here's the table as it stands for Ireland U17's group. pic.twitter.com/qM67V1HC9M

There were some great performances from the Irish players, with Corey O'Keefe, Conor Masterson, Anthony Scully, Trevor Clarke, and Conor Levingston impressing, but there was one player who was the heartbeat of all that was good with the team:

Ireland are coming back into this, with Connor Ronan in particular impressing, http://t.co/yoeOFvsYep pic.twitter.com/DCxWuggpIl

The ex-England U17 international and Wolverhampton Wanderers attacking midfielder was the source of all of Ireland's positive play, with his strong running, intelligent play and creative ability getting the most out of those around him.

Forget Jack Grealish and Patrick Bamford, Connor Ronan could be the biggest coup for Irish football over England.

But don't listen to us, listen to all those who watched the game to see what they said:

The Connor Ronan fan club watching on from Rochdale https://t.co/LQoeNMuDgX

That Conor Ronan lad is good

Ireland's number 10 ronan is quite the player #IrlU17

Conor ronan is a #baller #IrlU17

Despite the result, looks like we have some really talent in the @FAIreland u17 squad. Conor Masterson and Conor Ronan look quality 🍀

@McDonnellDan Conor Ronan and Conor Masterson look like real talent. Future of Irish football not as bleak as it's made out to be

See Also: A Lot Of England Fans Are Worried About Jack Grealish’s Future All Of A Sudden

See Also: 5 Players To Watch When Ireland U17 Face Italy On Live TV This Weekend

See Also: Ireland Set For Another Grealish Situation With Championship Player Of The Year