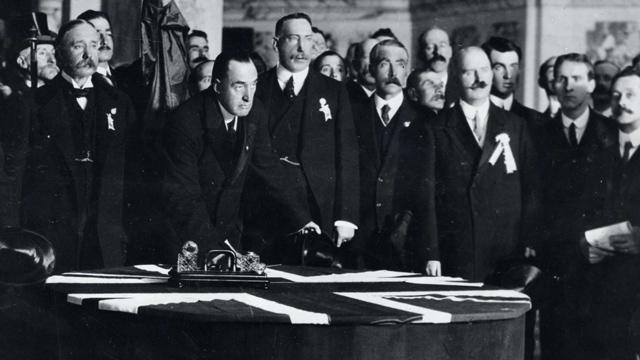 Historians, both professional and amateur, are fond of making the assertion that the father of Irish unionism, the man who, although a Dubliner, founded the Ulster Unionist party in 1912, had played hurling at Trinity College.

Politicians of many persuasions are in thrall to this titbit, using it to highlight the wonderful diversity and complexity of Irish identity. In 2010, when Gerry Adams organised the inaugural 'Poc ar an Cnoc' (Puck on the hill) on the green in Stormont, he proposed that the trophy handed out to the winners be named after Edward Carson.

It is true that Edward Carson did play a ball and stick team sport while at Trinity College.

But it wasn't hurling.

No, the sport Carson played at university was called 'hurley' - a game which, despite its name, resembled hockey more than it did hurling and was invented by English public schoolboys, not Irish nationalists.

In fact, hurley players regarded hurling with contempt, characterising it as 'the swiping game of the savage'.

In Carson's case, the GAA hadn't even been invented when he attended Trinity College.

UCD historian Paul Rouse has been to the fore in debunking the myth that Carson could have the been the nineteenth century Liam Rushe, if only blasted politics hadn't intervened.

The difference is there was no game of hurling played in Dublin in the 1870s - there was instead a game in Trinity College called hurley which was most likely brought across by English public schools and organised by Trinity from probably 1869 to the 1880s.

Hurley was less physical than hurling and was played entirely on the ground. It was played by the Dublin protestant community, of which Carson was very much part. 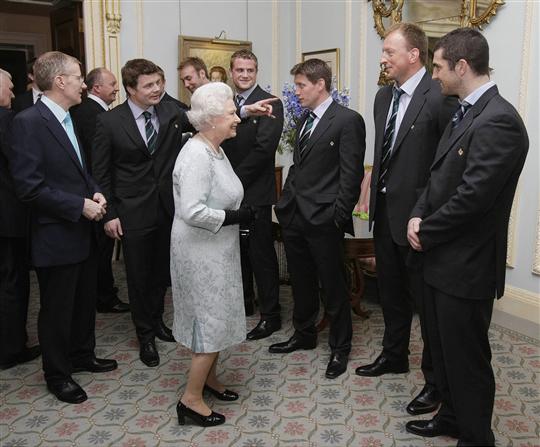 Ronan O’Gara became an unwitting icon for nationalist pub-talkers everywhere when he committed the revolutionary act of leaving his hands in his pockets when standing in the same vicinity as the Queen back in 2009.

Ireland had just won the Grand Slam and the Queen was meeting some of her triumphant fellow citizens as well as a few victorious folk from the neighbouring state.

As she approached the Irish out-half, a picture was taken which captured O’Gara in full ‘sullen ten year old waiting for the principal to tell him off’ pose.

O’Driscoll’s posture also fueled the speculation that O’Gara had insulted the Queen by cupping his hands to his mouth in the manner which some said resembled social embarrassment.

The Queen herself got over the whole insult very quickly but a number were determined to manufacture a diplomatic incident out of the whole affair.

Kevin Myers called him a ‘lout’ and wrote that his behaviour represented ‘a breach of international protocol’. O’Gara chose not to write a letter to the editor on that occasion.

There was even talk of it being revenge for Martin Johnson ensuring that Mary McAleese’s boots got muddy at Lansdowne Road in 2003. Was it true? Were O’Gara and Johnson taking potshots at one another via the medium of mild insults at their respective female heads of state?

Perhaps it was a dare, a la Dick Byrne’s famous forfeit? Had there been a video camera there, maybe we’d have heard footage of O’Gara shouting ‘bollocks’ very loudly in the general direction of the Queen.

Word of mouth and the passage of time have, as so often happens, rendered the story even more sensational.

Often times, one will hear folk in pubs breathlessly informing the unaware or the foreign how O’Gara went as far as to refuse the Queen’s hand when it was offered.

Even in the direct aftermath, the story that O’Gara refused to shake the Queen’s hand was gleefully peddled, so much so that the IRFU had to come out and issue a statement rubbishing the rumours.

The whole reception was both cordial and informal,” he said.

“In this environment, Ronan was obviously very relaxed just prior to shaking the hand and speaking with HRH, which the next sequence of the photography would show.

And here dear friends is the proof for those still in thrall to the idea that O’Gara told the Queen to get lost...

It is often asserted on shows like Soccer Republic that the League of Ireland's decline is attributable to 'Sky Sports' or 'Sky Sports and the whole PR thing' as Stuey Byrne put it.

The decline of the League of Ireland started well before Rupert Murdoch got involved in football. The League went through what is now characterised as its golden age during the 1950s, an era which was paradoxically a very bleak time for the country as a whole. Eamon Dunphy and others have written lovingly about Coad's Colts and the Rovers-Drums rivalry.

Even into the early 1960s, semi-professional players here earned almost as much with a job as full-timers in England. In 1963, a League of Ireland selection defeated a Football League team managed by Alf Ramsey and containing four future World Cup winners. Read about that here.

Winger on that side and future Bohemians chairman Tony O'Connell points out that English football really began to colonise the hearts and minds of the Irish people in the wake of the 1966 World Cup.

Irish people had always followed the English game. As early as the 1930s, Everton had a huge following in Ireland. But it was the growth of television in Ireland that really accelerated the process. It was Match of the Day more than Sky.

By the 1970s, crowds had dwindled alarmingly and giants like Drumcondra were forced, unthinkably, to disband.

In fact, the League of Ireland is probably in better shape now than it was in the 1980s, a time often pegged as the nadir of domestic football.

GAA
18 hours ago
By Balls Team
The GAA Players Who've Played Soccer 'Across The Water' XI
Football
4 days ago
By Paul Moore
Troy Parrott Set For Season-Long Loan Move To Championship Club
Football
5 days ago
By Paul Moore
Jack Charlton's Family Thank Irish Fans For Their 'Overwhelming Messages Of Support'
Popular on Balls
GAA
17 hours ago
By PJ Browne
'It's Not All About Winning Underage. It's About Building Players And People'
3