The award for angriest reaction to Ireland's 5-2 defeat to Cyprus goes to Eamonn Sweeney in the Sunday Independent.

Only a month earlier, Sweeney had ridiculed calls for Stan's head after the 4-0 loss at home to Holland.

Eamon Dunphy has occasionally extended Irish managers the courtesy of a honeymoon period. It's not widely known but he spent the whole of the Euro 88 qualifiers championing Jack Charlton, rubbishing concerns that he would transform Ireland into the "Wimbledon of international football."

But he was remarkably quick in declaring war on Stan's managerial reign. So alarming was the 4-0 defeat to Holland that Dunphy, with all his usual excess, insisted that Staunton had to go there and then before he got the chance to do any damage in an actual qualification campaign.

It may have only been a friendly but there was something deeply disquieting about the Holland defeat. Ireland had long grown accustomed to punching above their weight against the likes of Holland.

Seeing Holland run roughshod over Ireland in Lansdowne Road - the game finished 4-0 but it could have been more - was a real jolt to our footballing self-image.

For the opener in Stuttgart, a moral victory was the summit of our expectations.

In the circumstances, Ireland's 1-0 loss in Germany, though disappointing, was received as respectable. The battling qualities, the doggedness, the refusal to let illustrious opponents walk all over them - they were all still in place. 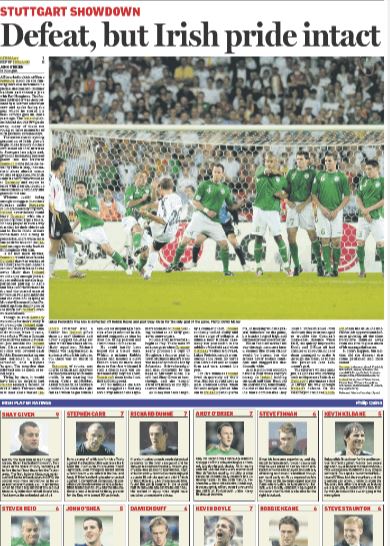 Following the Germany loss, Sweeney wrote an article sarcastically ripping the piss out of those who demanded Staunton's removal so early. He said that those who remained "committed to fighting the battle of Saipan in perpetuity will not rest until the tyro boss has been given his marching orders."

He was cheered by the "return of a certain joie de vivre in our play, a throwback to the days before the joyless technocracy of the Brian Kerr era."

It's a marker of the shockwaves set off by the Nicosia humiliation that the most emotional and ferocious response came from Eamonn Sweeney, a man who had previously positioned himself as one of Staunton's defenders.

We've rarely seen righteous anger like this in the sports pages. Read this and get a sense of the mood of the hour the day after probably the worst result in Irish football history.

"SHAMBOLIC IRISH GIVE TWO FINGERS TO THE PAST"

SHAME. SHAME. SHAME. Shame on Steve Staunton who presided over the worst performance in Irish football history. Shame on John Delaney who put a boy in to do a man's job...

... It was a sickening display of absolute indifference to the national jersey by a bunch of Premiership prima donnas who might as well have taken the green shirts off and trampled them into the mud of the GPS Stadium in Nicosia.

It was sometimes worn by part-time poorly prepared players who were outclassed by teams of far greater accomplishment.

But, not even in those dark and difficult times, was the white flag so conspicuously raised. 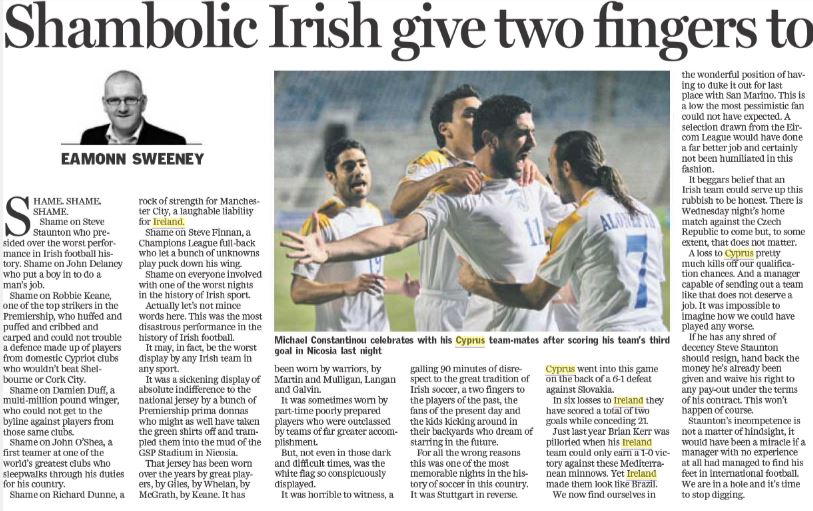 Sweeney asserted that it was "the most disastrous performance in the history of Irish football," a verdict few would dissent from.

It's ten years since that game this month.

Ireland's 5-2 loss in Cyprus is easily the most traumatic in Irish football history. It puts the 0-0 draw in Vaduz firmly in the shade. And Jack Charlton's team had built up a vast reservoir of goodwill to help them cope with the aftermath. 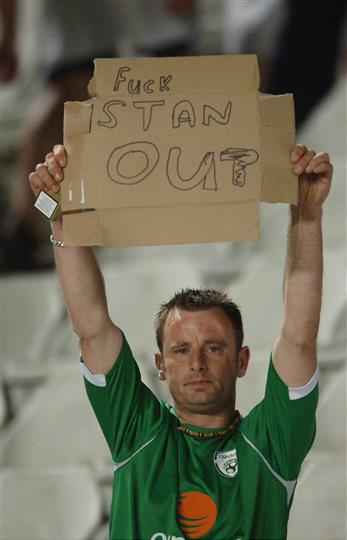 Only a year earlier, Ireland had played Cyprus in the penultimate game of 2006 World Cup qualifying. It was a grim experience for all concerned. Ireland won luckily through an early goal from Stephen Elliot and spent the remainder of the game watching the bold Cypriots pepper their goal.

Brian Kerr was a tightly wound bundle of angst on the sideline. He had to don the sack, cloth and ashes look afterwards and admit it was a poor performance and try to remind people that "look, we got the three points anyway."

Exactly a year on, we were almost looking back at Kerr's side's 1-0 win Cyprus as emblematic of some long lost golden age in Irish football. What we wouldn't do to go back to the days of only winning 1-0 in Nicosia?

Kerr, who had been deeply unhappy at his sacking and wasn't terribly good at hiding this, was in the unusual position of being in the co-commentary box for the Cypriot game.

In the Charlton era, we had the Jimmy Magee curse. With George Hamilton perched excitedly in the commentary box, microphone pressed up against his philtrum, Ireland would go game after game without losing.

Then, after Ireland had gotten so far, one of the big boys in Donnybrook would decide the occasion called for the experience and gravitas of the memory man. Whereupon, the whole thing would come crashing down around our ears.

Thus, the story of Ireland's World Cup campaign in Italia 90.

From 1998, the TV3 curse stepped in to replace the historical void left by Jimmy's departure from prime time soccer commentary.

Now, some of our more hardcore rationalists have pointed out that Ireland's poor record in games screened by the station may not be unconnected to the fact that they only ever won the right screen away qualifiers. Either way, the list of ignoble Irish displays brought to us by TV3 is a lengthy one, and even extends beyond soccer (2007 Rugby World Cup...)

For what it's worth, Ireland scored early through Ireland, conceded two in quick-ish succession before the 15th minute, remained 2-1 down until Richard Dunne powered home an equaliser from a corner just before half-time. Then, it all collapsed in the second half.

The culprits for each Cyprus goal were, in order, Andy O'Brien (failing to clear with a header), Paddy Kenny (coming a missing a cross), Andy O'Brien (giving away a needless penalty), McGeady (for losing the ball but there were other culprits after), and a mixture of Kenny (for failing to come and claim) and his defence (for allowing the free header and failing to anticipate the rebound).

Kerr was fairly moderate in his commentary of the game and mostly held his fire on the manager. But as the game ticked towards its desperate conclusion, he had to vent, pronouncing it an "embarrassing night for Irish football." Given his situation, he did a good job of making these comments sound 'more in sorrow than in anger.'

In the analysis booth in Ballymount, John Aldridge said he feared we were frittering away all the respect we had earned on the world stage.

Philosophical pundits suggested Irish fans might have to recalibrate their expectations. Roy Keane was gone, our players were no longer in demand at Anfield or Old Trafford (we were lucky if the higher-ups at Goodison Park wanted a look at them) and there was no golden generation of youngsters coming on scene.

It was tentatively argued by some of the real hardcore pessimists that the relative success of the 1987-2002 period had given us a distorted perception of our true standing in international football. What was actually to stop us dipping to Scotland, or God forbid, Northern Ireland levels of performance?

Ireland had to confront the possibility that they'd actually been living high on the hog, in relative terms, throughout the 90s and even into the early noughties. Now there were no players coming through and it was no use blaming the manager for the decline. A counsel of despair, Eamon Dunphy might label it now.

Keith Duggan, one of the rare columnists who held back from pelting Stan with rotten fruit, wrote much later on, following another excruciating night in San Marino, that Ireland had simply descended to their natural level.

Ireland have probably discovered their natural football habitat right now, existing in that ultimately pointless third tier of borderline respectability, capable of almost drawing with Germany in one instance and almost drawing with San Marino the next. 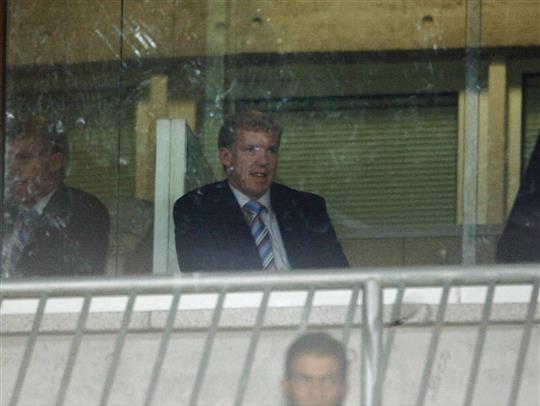 Four days after Nicosia, Ireland had to face the Czech Republic. They were favourites, along with Germany, to progress.

If Cyprus could maul us like that, what were Czech Republic going to do?

In extraordinary circumstances, it was decided to call upon the International Football Consultant, Bobby Robson, to give a speech to the players. On his own.

Robson was in failing health and, in any event, was only supposed to function as a mentor to Staunton. This arrangement had been greeted with gross scepticism by the press corps.

In the team hotel in Portmarnock, he rallied the players.

Speaking to Balls.ie, Kevin Kilbane remembered Robbo's speech that night as his most significant contribution as Ireland manager.

He was quite ill at the time and I think he'd lost the use of his left arm or his right arm. He did a speech around that when Stan was under severe pressure after that Cyprus game after we'd lost 5-2 and we were coming into Dublin to play the Czech Republic.

And he did a really good speech for us the night before that game, basically, it was more telling us to get our finger out but basically saying the manager is under pressure here and we need to produce something for him.

Kilbane's goal, which put Ireland into the lead on 62 minutes was greeted by a thunderous roar, to rival that which followed McAteer's winner against Holland. It was an explosion of relief and defiance, you could say. Hardly surprisingly, the players celebrated it with a striking degree of vigour.

I've seen a lot of important goals, even scored some over the years but I don't think I'd ever seen one that got such an emotional response as the one Kevin Kilbane scored against the Czech Republic. Even I jumped out of my chair and I'm bloody paralysed.

Two minutes later, they let Jan Koller in for an equaliser. But, in the circumstances, it was a rousing performance and the 1-1 draw was deemed a success. An escape to moral victory once more.

Read more: "We've A Player Who'd Get In The England Team" - Eamon Dunphy Hits Out At Martin O'Neill After Moldova

Football
6 hours ago
By PJ Browne
The Stars Of Sunderland Til I Die Season 2: Where Are They Now?
Football
1 week ago
By John Dodge
Every Irish Footballer To Play In The FA Youth Cup Final Since 1995
Football
1 month ago
By PJ Browne
Katie McCabe Bringing Arsenal Standards To Ireland Squad
Previous Next

Football
6 hours ago
By PJ Browne
The Stars Of Sunderland Til I Die Season 2: Where Are They Now?
Football
1 week ago
By John Dodge
Every Irish Footballer To Play In The FA Youth Cup Final Since 1995
Football
1 month ago
By PJ Browne
Katie McCabe Bringing Arsenal Standards To Ireland Squad
Popular on Balls
Golf
1 day ago
By Gary Connaughton
Padraig Harrington Glad He Didn't Have To 'Make A Decision' On Saudi Golf League
Motorsport
1 day ago
By Gary Connaughton
Carlos Sainz Worried About How 2022 F1 Cars Will Affect Health Of Drivers
46