Here Are 4 Irish Sports Films That Just Have To Be Made...

Sports films had no luck at the Oscars last night. It's eleven years since the genre carried off the big one - Million Dollar Baby winning Best Picture in 2004.

But if Hollywood executives keep dragging their feet about these potential classics, what do they expect?

Here is a number of Irish Sports Films that are just waiting to be made. 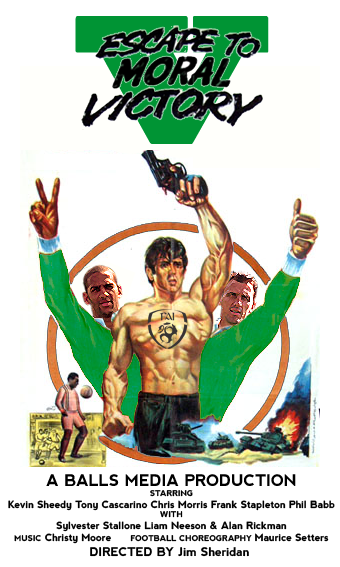 Several Irish footballers are imprisoned in Wandsworth prison for a crime they didn’t commit (The Birmingham Six are just down the corridor).

In response to some of the jeering, anti-Irish statements of the English prison guards, the boys agree to play those same guards in a football match. They hatch a plan an ingenious plan to escape while the English fans riot afterwards.

However, this plan involves winning - or at least avoiding defeat.

Aided by an elderly Geordie prisoner who is sympathetic to the Irish lads' plight, the boys train like maniacs and evolve a remarkable team spirit all the while following a dietary programme that would now be frowned upon.

However, they pin the English guards back in their own box in the second half, harrying them relentlessly, as the handful of continental prisoners in Wandsworth look on thoroughly unimpressed with the quality of the football. Late on, with time running out, they ram home an equaliser which sends the Irish prisoners in Wandsworth into delerium.

The English prisoners, upset at the result and enraged by their manager, go nuts at the final whistle.

In the chaos the Irish escape out the back of the prison with the help of Liam Neeson and Alan Rickman. They drive back across the border into Ireland…*

(* the screenplay was written by an American so all the details may not be entirely accurate).

Four Draws And A Loss: An Italia 90 Love Story 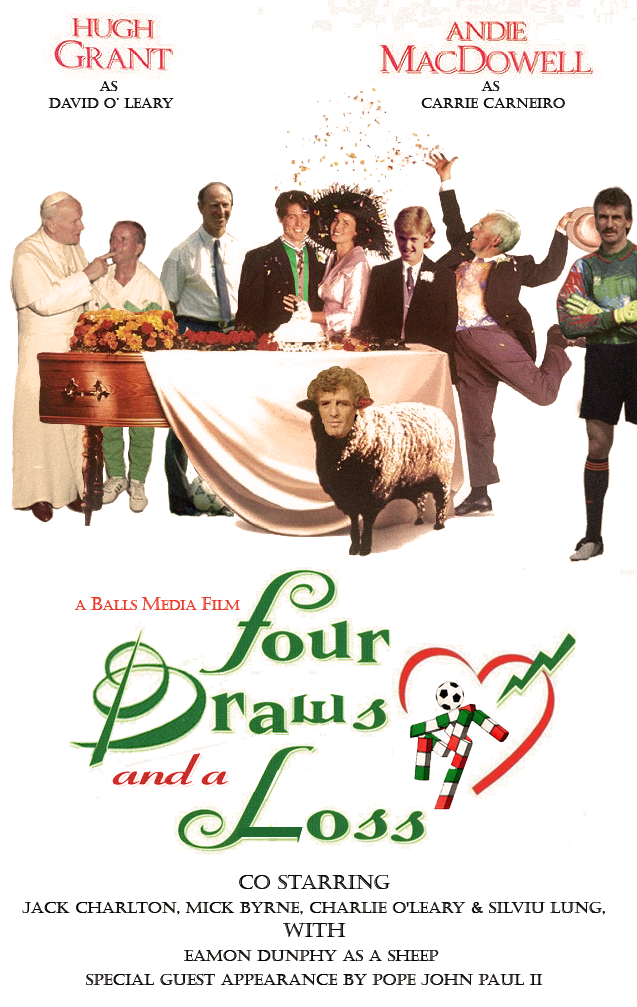 Watching the lads securing draws from the jaws of both defeats and victories from the vantage point of the bench, he strikes up a rapport with Mick Byrne's assistant physio, Carrie Carneiro.

However, the pair's blossoming relationship faces one major obstacle. Carrie is engaged to be married to Romanian goalkeeper Silviu Lung.

Carrie falls out with her boss Mick Byrne prior to the Romanian game and leaves the Irish setup. Depressed by this, O'Leary thinks about leaving also. However, he hangs in there and as the game ticks towards penalties, Big Jack signals for Dave to get out there.

O’Leary fixes his eyes at the charmless Lung and decides he’s going to take a penalty in the shoot-out.

As he marches forward to take the decisive penalty he glances up at the Romanian end where he suspects Carrie might be.

As it happens, Carrie is sitting up in that exact spot, and she now finds she wants Dave to score and her husband-to-be to be beaten.

Both the nation and Carrie held their breath as Dave shoots home. Dave glances up at her just before he is mobbed by his jubilant teammates. Carneiro shows up beside the Irish team dugout for the quarter final match against Italy where O’Leary (happily on the bench again) meets her and the two share a passionate kiss as Ireland exit the tournament…

Featuring Hugh Grant as you’ve never seen him before and Andie McDowell as Carrie Carneiro.

Listen to the phenomenal trailer for this film below.

Where's Your Fuckin' Pride And Prejudice? 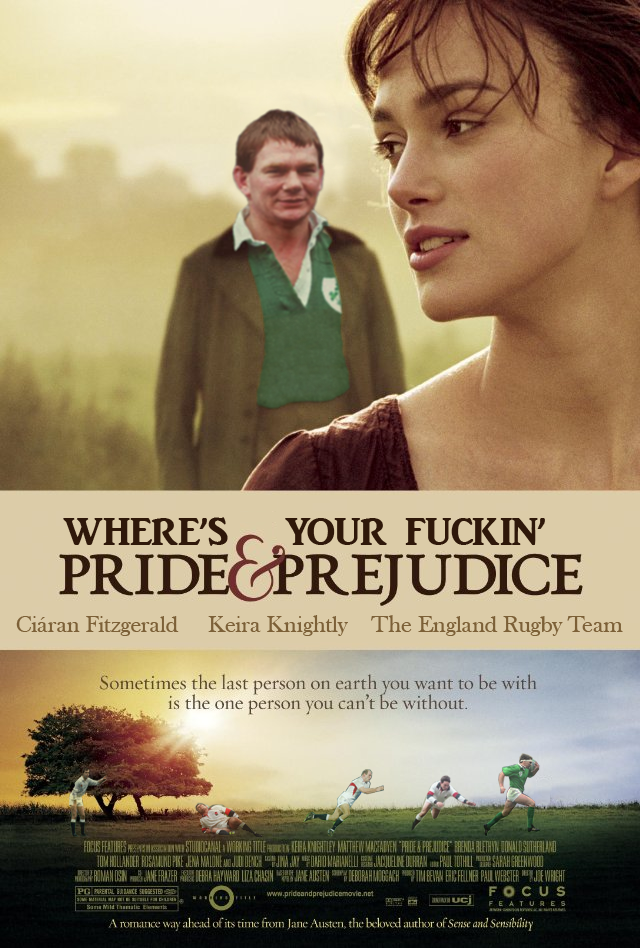 The Bennett's live in wealthy rural Gloucestershire within reasonable proximity to Kingsholm Stadium.

The two girls Elizabeth and Jane are regularly pursued by numerous ostensibly eligible suitors, all of whom have played at one time or another for the England rugby team.

However, they want more. Rory and Tony Underwood have their advances rebuffed. At a party the following week, Will Carling and Marcus Rose make their move but they too are knocked back.

Then following week, two more suitors Clive Woodward and Ciaran Fitzgerald show up. Woodward's attendance was not a surprise but quite why an army officer from Co. Galway showed up at a party in rural Gloucester is a mystery to all concerned. However, his wildness is exotic to the women, who are weary of mannered English posh boys.

However, Woodward turned out a dogged suitor and eventually wears down Elizabeth. As she is about to accept his proposal of marriage, Fitzy roars out from across the room 'Where's your fucking Pride!?'

Elizabeth is jolted by the roar and is startled into remembering what a drip the lad Woodward is. She promptly leaves the party with Fitzgerald. She marries him and settles down to become an English and Geography teacher in Garbally College, Ballinasloe. 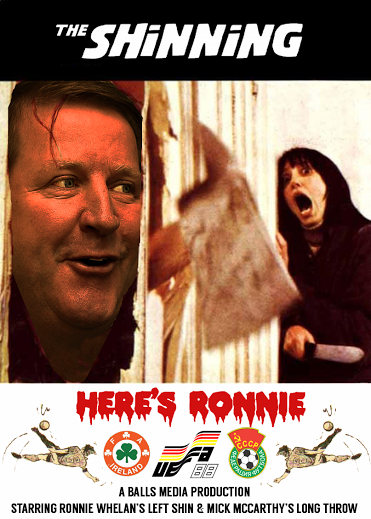 One of the scariest filmic experiences of all time which still has the power to shock even today.

Ireland undergo a strange personality change when they take the field against the USSR. This leads to behaviour which shocks and appals the man under whose care they are under.

They start passing the ball. No one knows what's going on.

Things reach a dazzling crescendo when their ungainly centre half heaves a freakishly long draw in the direction of the box and Ronnie Whelan catches the ball on his shin. It loops past the bemused keeper and into the corner.

The film appears to be settling down a bit when there is a devastating twist at the end and a piercing call of 'DANGER HERE!!!' rings through the air...

Gone With The Wind In The Second Half

Sean Og of the Dead