4 Other Times That Eamon Dunphy Pimped Himself Out

Jiving and lip-syncing in an ad for chocolate wasn't the first time Eamon Dunphy allowed himself to become a commercial tool. Check out these four other moments when the RTE stalwart risked his dignity in the name of advertising.

Give Us A Bite There, Baby

Lest we forget, Dunphy was played a futuristic projection of a severed head in a television campaign by the fast food behemoths Mickey D's. Seeing a sextogenarian flog Big Macs and deliver his hackneyed catchphrase is arguably more cringe-worthy than dancing over a chocolate bar with his fellow colleague.

If you had to pinpoint one moment where Dunphy lost his dignity, this would probably be it. Back in 2012 the broadcaster lost a bet and literally dressed himself up in the trappings of a court jester and paraded the streets of Dublin. However, you don't have to look too closely to see that a certain betting agency used the stunt to get there brand some coverage.

Is This Not Supposed To Be About The Charity?

Ok, you have to commend him for risking hypothermia for charity. However, when looking at this clip, you'd be forgiven for thinking it's an advertisement for an Irish tabloid that Dunphy is associated with. Note the polo shirt and baseball cap embroidered with the tabloid’s logo, the poster in the background, the massive red bucket bearing the newspaper's name and Dunphy makes sure to point out that the man who pours the ice over him is in fact a scribe for the paper.

Seriously, we have no clue what this photo is promoting/launching but it would haven taken serious willpower not to include it in the list. How often do you get to wheel out a picture of Eamon Dunphy impersonating a trendy member of the clergy (the flip phone was all the rage at the time) with two leggy, blonde models donning slinky Beelzebub costumes on each arm? 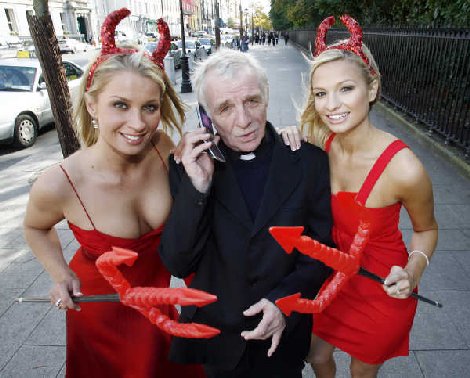