The Day Maradona Graced Lansdowne Road Over 40 Years Ago

A year ago today, the world was in mourning at the passing of Argentina's favourite son, Diego Maradona. Arguably the greatest footballer of all time, his extraordinary talents on the pitch inspired generations of adoring fans. Even now, 30 years after his heyday, he is a hero to football fans everywhere.

It was 41 years ago in May when a 19-year-old kid gave Irish football fans just a glimpse of what was to come. The next few years would establish Maradona as the best player of the his generation, but he was only setting out on that journey in 1980.

Argentina had won the World Cup on home soil two years before, but the then 17-year old had not been included in the final squad. However, by the time the world champions embarked on a European tour in 1979, he had started to become a much more familiar name on this side of the Atlantic.

They took on the likes of Italy, The Netherlands, Scotland, and Ireland, going undefeated. Ireland would muster a 0-0 draw at Lansdowne Road, with Frank Stapleton making a lasting impression on a youthful Maradona.

He had been keeping a diary for Argentine publication El Gráfico during the tour, and this is what he had to say about the game in Dublin, a game he in which he played only the second half (h/t The National):

They whistled our national anthem a little, though afterwards applauded our best moves. At half time, Cesar told me I was going to play and that I shouldn’t be scared. I went in very relaxed.

I want to play always, but Menotti knows what he’s doing … They hardly hit me - I just have a bruise from [Frank] Stapleton on the right leg that still hurts.

He would play against Irish opposition twice more in 1980. A League of Ireland XI travelled to Buenos Aires to take on an Argentina side. The game finished 1-0, with Maradona scoring the winner.

The Argentines then set across the Atlantic for a brief tour of Europe, stopping off in London, Dublin, and Vienna. They fell to a 3-1 defeat against the English three days before they arrived at Lansdowne Road.

This time Maradona played the full 90 minutes, assisting the only goal of the game. You can watch footage from that one below:

Later that summer, the forward would go on to lead his country to glory at the FIFA World Youth Cup in Japan. 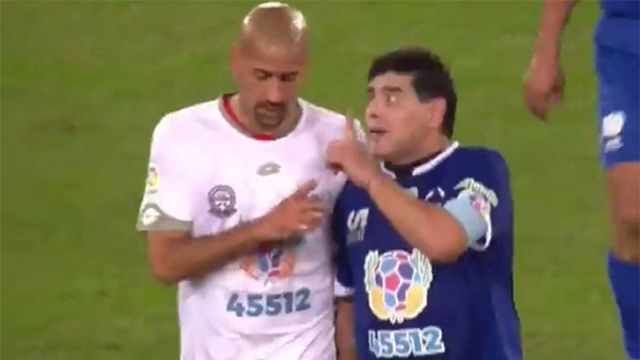 Football
2 weeks ago
By Balls Team
The Full Story, Video And Analysis Of 'That' Kevin Keegan Rant
Football
1 month ago
By Jonathan Browne
Chelsea 7-5 Liverpool- One Of The Wildest Champions League Quarter-Finals Ever
Football
1 month ago
By Eoin Harrington
Man United v Real Madrid In 2003 - One Of The Greatest Champions League Games Ever
Previous Next

Football
2 weeks ago
By Balls Team
The Full Story, Video And Analysis Of 'That' Kevin Keegan Rant
Football
1 month ago
By Jonathan Browne
Chelsea 7-5 Liverpool- One Of The Wildest Champions League Quarter-Finals Ever
Football
1 month ago
By Eoin Harrington
Man United v Real Madrid In 2003 - One Of The Greatest Champions League Games Ever
Popular on Balls
Football
1 day ago
By Eoin Harrington
'Ronaldo Is A Cod' - Remembering Eamon Dunphy's Infamous 2008 Rant
GAA
16 hours ago
By PJ Browne
The Draw Has Been Made For Tailteann Cup Opening Rounds
GAA
1 day ago
By PJ Browne
Donal Óg Cusack Defends Dublin Hurlers After John Mullane Criticism
The Rewind
2 days ago
By Eoin Harrington
Watch: Brilliant Dermot Morgan Dublin Segment From 'The Travel Show' Resurfaces