The 5 Most Surprising Premier League Stats From The Weekend

It was a fine weekend for Manchester United, as they crept closer to the Top Four with victory over Spurs - their first in 278 home league games.

Arsenal and Chelsea keep winning, but Liverpool again slipped up - this time at home to West Ham. Bournemeouth, who seven years ago on Saturday lost to Morecambe, now sit 12th in the Premier League, and Leicester walloped Man City to remind us all how why became champions.

Here are the oddest stats from a decent weekend of Premier League action:

As per Opta, Chelsea have won nine-plus games on the bounce for the fifth time in the Premier League, which is once more than Manchester United have achieved in the same period.

9 - Chelsea have won 9+ Premier League games in a row for the fifth time, more than any other team in the competition. Habit. pic.twitter.com/kwqktxMZcI

In other Chelsea news, Victor Moses has won all nine of his Premier League starts this season.

Last season, Riyad Mahrez assisted Jamie Vardy alone six times in the Premier League. As recently as two weeks ago, he had completed just one pass to Vardy since September, as Leicester's shocking form saw them looking over their shoulders.

But Leicester's thumping of Man City saw Mahrez produce a deft assist for his former partner-in-crime. Incredibly, it was Mahrez's first assist for Vardy since February.

Is diving taking a tumble?

It would certainly seem it's being curtailed, based on the below recordings. 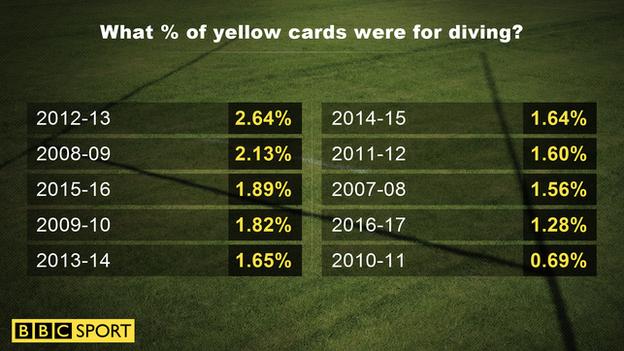 This season, there have been eight bookings for diving - 1.28% of the total of 623 yellow cards. Judging by that ratio, we're headed for the second lowest tally of yellow cards for diving since 2007/2008.

And finally... What the?

How the bloody heck did this happen? 20 minutes without completing a pass in the opposition's half, and on either side of half time too... Bizarre.

West Ham didn't complete a single pass inside Liverpool's half between the 35th and 55th minute.