Cast your mind back to the dejection that followed Ireland's defeat to Scotland in Glasgow last year, or even the Ireland draw with Scotland last summer. Few sane people would have envisioned Ireland qualifying for Euro 2016 after these results. This summer, it was voguish to say Ireland were no worse under Trapattoni than they were under O'Neill. Less than 20,000 people attended Ireland's terrible win over Georgia three months ago. 50,500 people packed out the Aviva last night to watch Ireland beat the 20th ranked team in the world with considerable ease.

So much has changed for the Irish football team in so little time. These are the things not even Keano the psychic could have predicted when Ireland kicked off its campaign in Tblisi 14 months ago.

Outside the Beggars Bush last night, Ireland fans sang "We All Dream Of A Team Of Johnny Walters". Gary Breen was now surplus to requirements. It's not that Ireland fans didn't appreciate Walters steel and grit during the Trapattoni years, it's just that Walters has laid down such an incredible marker this past year. The goal against Scotland at home, the invaluable goal against Georgia in September, holding up the ball against Germany, everything last night. It's as if Martin O'Neill built an entire system around Walter's abilities (abilities that seem wasted under Trapattoni when we simply surrendered possession).

Not one for selfies after games but you can't miss one with the president Michael D Higgins ☘☘ have a bit of that! pic.twitter.com/R2EeobeEZZ

We wrote last month about the things you can do to make yourself more like Jon Walters. It's as relevant now as it was then.

Martin O'Neill made a few big calls this campaign but none bigger than calling the name for Darren Randolph instead of David Forde after Shay Given's hammy went during the Germany. It was an inspired call. Randolph had the assist on Shane Long's goal and has maintained an air of calm and poise between the posts for Ireland in that purple jersey ever since.

Randolph's Ireland career before the Germany game was hardly memorable - 2 caps as a sub in friendlies. If he's not starting Ireland's first game of Euro 2012, I'll be frightened.

Robbie Brady becoming one of Ireland's most important players

O'Neill abilities as a coach come into sharp focus when one examines the role Robbie Brady grew into this campaign. We remember the consternation caused when Brady was started in defence for the Poland game at home. And though he was at fault for Poland's goal that night, everything Brady has made the leap since. His goal against Bosnia in the fog was hugely valuable and he was magnificent in defense last night on top of assisting on Walters's second goal. So much of Ireland's attacking threat now runs via Brady's channel. In the mixed zone afterwards, Brady seemed on the verge of tears. He had been vindicated, but more importantly, he had vindicated his manager.

Cyrus Christie - footballer or internet meme combining Miley Cyrus and Chris Christie? Ask most Irish fans to answer this question in September 2014 and I presume at least half would have said the latter. O'Neill plucked Christie from obscurity and then leaned on him on the Germany game. Cyrus Christie duly delivered. 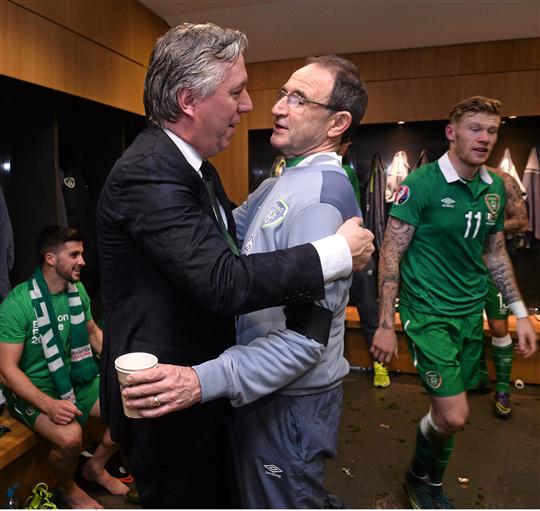 Whether it was pub singalongs or multi-million euro payments from Sepp Blatter, Delaney was the big Ireland story for most of this campaign. Yet as Ireland's results improved this autumn, Delaney maintained a deliberately low profile, as hard as that must be for him. Perhaps we have all entered a new era of maturity.

It is worth remembering that we would not be qualifying for France were it not for McGeady's heroics in Tblisi back in September 2014. He scored one of the greatest Ireland goals ever that day. Those were the days of Peak McGeady. Any chance of qualification ran through McGeady, or so it seemed.

McGeady's form is shot both for club and country. Love him or loathe him, McGeady was one of the first names on the Ireland team sheet for the last six years. He is now a sub, and Ireland seems better for it.