We are about to enter a new era for Irish football, one in which we can expect to see plenty of changes both on and off the pitch.

Stephen Kenny's appointment as Ireland manager has garnered plenty of excitement. For far too long the men's senior international team have been brandished in a cloud of negativity, often from within.

The last three Ireland managers could certainly be said to possess a pessimistic view on football, especially Giovanni Trapattoni and Martin O'Neill. They were quick to point out the lack of playing resources at their disposal, with many people far too accepting of a negative and dire playing style as a result.

Under Kenny this team will attempt to play expansive and attacking football. It may not breed immediate results, but it will be healthy for the long-term outlook of this team.

Some of the changes may be gradual, especially when it comes to playing personnel. Qualifying for Euro 2020 is still an incredibly important goal. This will likely ensure that we won't see wholesale changes until after the playoffs for that tournament have been completed.

Still, when the squad for September's UEFA Nations League games against Bulgaria and Finland is announced on Monday, we can expect to see some changes.

This will be Stephen Kenny's only opportunity to fine-tune the team before the game against Slovakia. As a result, we can expect to see a near first choice XI selected in each fixture.

Much of the team is settled. The goalkeeper and back four almost picks itself, with the exception of the Seamus Coleman versus Matt Doherty debate at right back.  The midfield will have more options than under Mick McCarthy, with James McCarthy and Jayson Molumby likely to come into contention alongside Conor Hourihane, Jeff Hendrick, and Alan Browne.

It's difficult to imagine David McGoldrick losing his place as the central striker after the form he has displayed for club and country over the last 18 months or so. With Kenny likely to use some variance of a 4-3-3 formation, it will be interesting to see who occupies the spots on the wings.

James McClean and Callum Robinson were first choice under McCarthy, with Alan Browne and Matt Doherty also operating on the right on a couple of occasions.

Many have suggested Aaron Connolly for the role on the left flank. 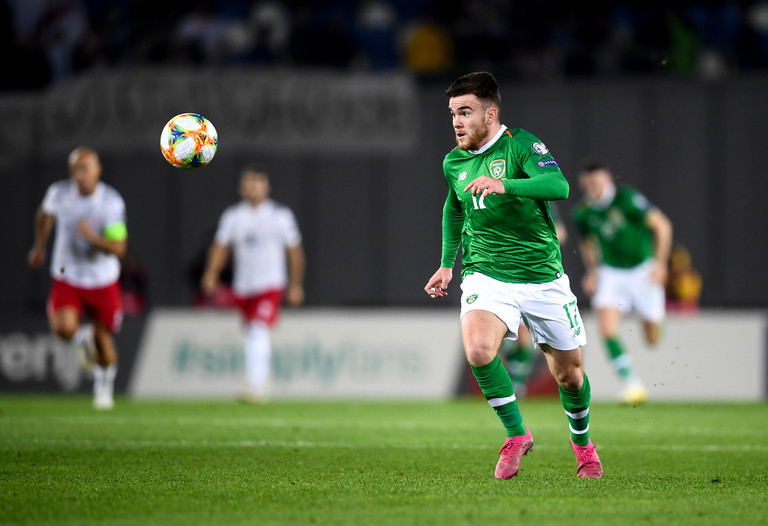 The 20-year old is an exciting young prospect, putting in some fantastic displays for Brighton during his debut Premier League campaign. He offers the type of pace and attacking intent that is often lacking from the Ireland team.

Such suggestions have also been met with a predictable response in some quarters.

Connolly has had one experience playing out wide for Ireland at senior level and it was not pleasant one. The 2-0 loss in Switzerland last October was a miserable display as a team, with Connolly looking completely lost on the left wing.

Some have used this as evidence that he can't play in that position for Ireland.

Firstly, it is worth mentioning just how different it is playing as a winger under Stephen Kenny in comparison to Mick McCarthy.

Whereas McCarthy wanted to his wingers to stay on their wing and 'get chalks on their boots', the player involved in Kenny's front three will have a much more fluid role. They will drift infield, constantly swapping positions.

Aaron Connolly knows what it takes to excel in this role. He played it on a number of occasions under Kenny as U21 level, putting in some brilliant performances.

The first example came in the Toulon Tournament in the summer of 2019. Starting on the left wing, Connolly got a goal and as assist in the 4-1 win over China.

The assist was especially impressive, breezing by the opposition right back and expertly picking out Elbouzedi in the box.

Ireland start quickly against China as Aaron Connolly squares it for Zach Elbouzedi who fired home! (0-2) 🙌

Even in this brief clip from the semi-final loss to Brazil, you can see how dangerous he can be when operating from tight areas.

It was in the first game of the European Championships qualifiers that Connolly really stole the show.

He provided the assist for the only goal of the game, producing an incredible solo run before picking out Troy Parrott.

Troy Parrott nets on his debut from close range, following Aaron Connolly's brilliant run and cross down the left flank.

That was far from his only positive contribution in the match, with his first half highlight reel a sight to behold.

"He's direct, he drives at you, he's strong.

Shane Supple and Paul Corry have been impressed with Aaron Connolly during the opening 45 minutes of tonight's #U21EURO qualifier against Armenia.#IRLU21 pic.twitter.com/q65fzVPj4g

It's clear that the Galway man offers everything Stephen Kenny wants in his wide players. He wants his wingers to go by people, get to the byline and pull it back. It is noticeable how many of the U21s' goals under him came via this method.

This differs from Mick McCarthy, who was often more concerned with what his wide players did in defence in comparison to attack. He asked them to stay out wide, swinging the ball into the box at the first opportunity. It was rare we saw James McClean or Callum Robinson go by a player.

It is little wonder Connolly struggled in such a system on his first start at that level.

While he may play as part of a front two at club level, it is still cleat that Connolly favours to attack from the left. Two of his three league goals last season came from drifting onto the left and then attacking the unoccupied space in front of him.

😍 All the #MondayMotivation you need, courtesy of @AaronConnolly_9!#BHAFC 🔵⚪️ pic.twitter.com/pktLYQeyzc

Connolly has the ability to cut in on his right foot, or take the opposition defender on the outside. He is perfectly capable of playing on wing for Ireland at senior level, even excelling.

Those who say he isn't are too used to watching previous Irish sides fail to have their wingers move with the times. That won't be an issue under Stephen Kenny.