Aaron Drinan scored a hat-trick, and set up two other goals, as his Leyton Orient side beat Hartlepool 5-0 in League Two on Saturday.

The game was also notable for a strange scene at the beginning of the second half which saw the teams continue to play into the same ends as they had in the opening period. They did so as referee Alan Young had blown the half-time whistle after 45 minutes and not played the injury time which was due.

"It was mental," Drinan told the Leyton Orient YoutTube channel.

"It's the first time I've seen something like that. We were about to come out for the second half, and he just goes, 'We're going out playing four minutes 20 seconds of the first half, and then flip it around'."

The referee has bought the teams back out after half-time and now opted to play the four minutes of additional time he ignored.

And then the teams will switch ends.

Leyton Orient assistant manager Joe Gallen added: "The ref made a mistake, and was man enough to own up to it, and man enough to find a solution, and rectify it. From a Hartlepool point of view, they wanted those extra four-and-a-half minutes played. We had no problem with that."

Drinan opened the scoring after 20 minutes with a fine finish from the edge of the box and set up Harry Smith for Orient's second 14 minutes later.

During that bizarre four minutes of first half injury time, Drinan thought he had scored his second, and Orient's third, only for it to be ruled out for offside. "Nah, nah, it wasn't offside! I looked at the tape," Drinan said.

After setting up Tom James to make it 3-0 in the 56th minute, Drinan made it 4-0 in the 84th minute with a fine clipped finish over the Hartlepool goalkeeper. He completed hit hat-trick with a tap-in during injury time.

The 23-year-old Corkman's performance came after spending a few games on the bench.

"He scored four goals earlier on in the season, and we're only just going into November.," said Gallen regarding Drinan.

"He's been out of the side a little bit, but he came back today, and scoring a hat-trick was great for him, great for the team. He also set up the other two goals.

"His first and second goals were really chances. The first goal in any game is the pressure goal, and I thought it was excellent. I didn't think it was a real clearcut chance. It was pretty much a half chance from the edge of the box. It was a fantastic finish.

"The second goal, from a technical point of view, it was a very good decision to clip it over the keeper. He did that with aplomb.

"He's been patient. He's a very good trainer, a very good person, we like him a lot. He's got his rewards today." 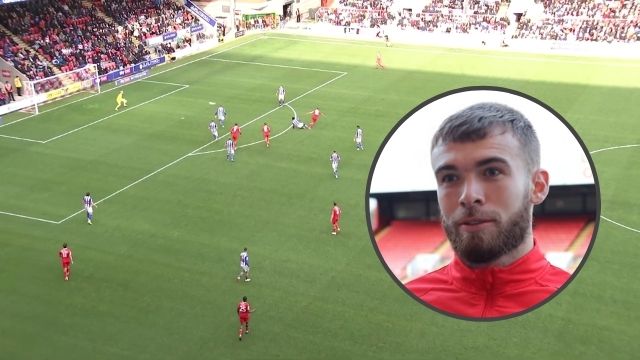