Plenty of players have been subjected to criticism from Roy Keane down through the years, with Harry Maguire at the end of it on a number of occasions in recent weeks.

The former Ireland midfielder has not been shy in discussing how the current Manchester United captain has been well off it in recent times, with his celebration after scoring for England against Albania earlier this week the latest incident to rub him up the wrong way.

Speaking on ITV, he said Maguire's celebration presumably directed at his recent critics was 'embarrassing'.

He puts his hands to his ears like he's shutting his critics up... it's embarrassing.

He's been a disgrace last few months for Manchester United, he scores and he thinks he's going to shut his critics up, it's embarrassing.

This is far from the only time Keane has criticised Maguire in recent weeks. He slammed the player's form at club level, even pulling out a rather hilarious impression of him in the process.

Many people seem to agree with the sentiment Keane has been expressing, but others feel he has now gone too far in his criticism of the player.

I’ve seen the quotes and the video of it from Roy Keane and I think Roy Keane is being a big bully, there.

I think he’s bullying him because Harry Maguire has been under a lot of pressure after some not very good performances for Manchester United.

This was the next game available to prove that he’s a good centre-half. Yes, it’s Albania but, still, we had a job to do. He scores, the excitement of scoring – you’re going to celebrate.

If I was going for a run of bad form when I scored the goal, I’d want to do the exact same celebration – hands on your ears to the critics to say, ‘I’m going to try and put in a good performance’, and he did that.

I thought his defending was very good and he scored a goal. Every time he does something now it feels like everyone is against him.

He’s English, he’s the captain of Manchester United. Yes, there’s pressure with that, but he’s probably our best centre-half.

Let’s get behind him and not always trying to criticise him.

For me, it’s bullying from Roy Keane. Everyone sort of jumps on the bandwagon whenever Roy Keane says something.

'Bullying' is certainly a very strong word to use here and you would have to wonder if Keane has really been over-the-top in the way he has criticised Maguire.

Many Manchester United fans would probably share very similar opinions of the player at the moment. 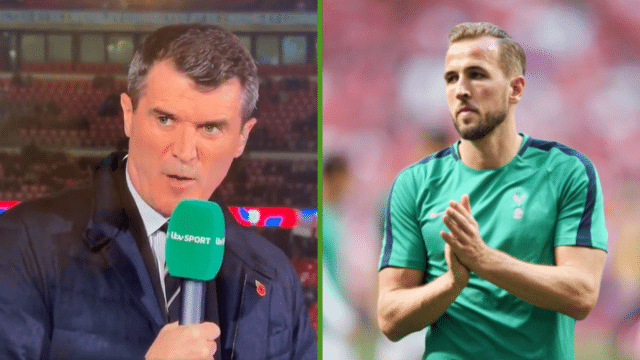 Football
5 months ago
By Gary Connaughton
Does Gareth Southgate Actually Have Too Many Attacking Talents In His Squad?
Football
1 year ago
By Balls Team
Jack Grealish Reminds Ex-Villa Captain Of 'Iniesta In His Prime'
Football
6 years ago
By PJ Browne
Video: You Know You're Having A Bad Game When MNF Studio Are Laughing At You
Previous Next

Football
5 months ago
By Gary Connaughton
Does Gareth Southgate Actually Have Too Many Attacking Talents In His Squad?
Football
1 year ago
By Balls Team
Jack Grealish Reminds Ex-Villa Captain Of 'Iniesta In His Prime'
Football
6 years ago
By PJ Browne
Video: You Know You're Having A Bad Game When MNF Studio Are Laughing At You
Popular on Balls
Rugby
2 days ago
By PJ Browne
Jackman Explains How Barman Helped Connacht Recruit Mack Hansen
The Rewind
22 hours ago
By Colman Stanley
New On Netflix Ireland: Your Guide To December's New Additions
Football
1 day ago
By PJ Browne
MK Dons Boss Criticises Troy Parrott After Red Card Against Leyton Orient
Football
1 day ago
By Jonathan Browne
Ralf Rangnick's Manchester United Transfer Wishlist Contains Some Massive Talent