McGeady Spills The Beans On Naked Shower Scrap With Boruc

Aiden McGeady once fought a naked Artur Boruc in the shower of the Celtic training ground dressing room.

The Ireland international and the Pole "hated each other" according to former teammate Barry Robson who had previously told a version of the story. They were teammates for five years before both left Parkhead in the summer of 2010.

Speaking on the Open Goal 'Keep the Ball on the Ground' Podcast, McGeady explained what happened between him and Boruc which led to blows.

"He was in the wrong that day," said McGeady.

"We were arguing about a free kick. Artur was like 'play on, play on' and I said 'mate shut up, it's a free kick'. When I said that, he's obviously flipped. I was standing and I've heard people saying 'woah woah!', so I turned around and big Artur was running at me.

"He went to throw a punch but I've moved out of the way of it and he did a forward roll after. I asked what he was playing at and he said 'I'll get you in there', and to be fair he did get me in there.

"I was sitting reading a paper, it was quite sly the way he did it because he was standing above me. He offered his hand and said he was sorry about earlier on.

"So I put my hand out, and he just went bang and cracked me. It was a good punch because I had an immediate black eye. I tried to get him back. I stood up, obviously raging, I'm not going to batter Artur Boruc, am I?

"He is an absolute streetwise, 6' 4" Polish bear, do you know what I mean? He could actually handle himself as well. I tried to get back at him, everyone is in the middle, and I'm cutting about with this black eye.

"Artur's like 'I told you, I told you' and then walked in the shower, and a few guys are about mixing it like, 'I wouldn't be taking that man'. So I thought 'you're right'. I just went in the shower after him, but he spotted me coming and got me again.

"I'm trying to wrestle him. I had my training kit on but he was naked. I was trying to get a dig in at him, but he was man handling me to the ground. He was ready to boot me but Gaz Caldwell and Louvey (Glenn Loovens) grabbed him and wrestled him away."

See Also: 'I Had No Fear Of Roy Keane. The Public Thinks Everyone Is Scared Of Him' 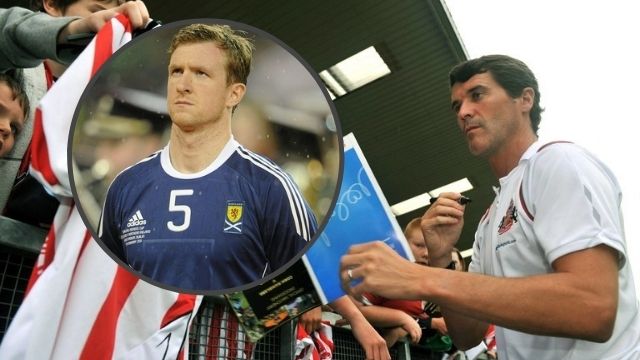 Football
3 weeks ago
By Gary Connaughton
Red Cards, Trashed Dressing Rooms, & Gun Wielding Ultras: The Story Of Aiden McGeady's Russian Adventure
Football
5 months ago
By Gary Connaughton
Presenting The Balls Irish Team Of The Season, As Chosen By You
Football
5 months ago
By Eoin Harrington
Wes Hoolahan Named In League Two Team Of The Season
Previous Next

Football
3 weeks ago
By Gary Connaughton
Red Cards, Trashed Dressing Rooms, & Gun Wielding Ultras: The Story Of Aiden McGeady's Russian Adventure
Football
5 months ago
By Gary Connaughton
Presenting The Balls Irish Team Of The Season, As Chosen By You
Football
5 months ago
By Eoin Harrington
Wes Hoolahan Named In League Two Team Of The Season
Popular on Balls
Football
10 hours ago
By Eoin Harrington
John O'Shea Explains How He Ended Up In Goal For Manchester United In 2007
GAA
17 hours ago
By PJ Browne
Three Live Club Football And Hurling Games On TV This Weekend
GAA
12 hours ago
By PJ Browne
Incredible Penalty Halts Premature Celebrations In Galway
GAA
14 hours ago
By Maurice Brosnan
'Bad Coaching. I Think That Is A Big Problem In The GAA'