There have been countless tributes paid to Alan McLoughlin in the wake of his death on Tuesday afternoon. The former Ireland midfielder passed away aged 54 after a battle with cancer, and Irish football pundits paid tribute to McLoughlin in the buildup to Tuesday evening's Champions League game between Manchester City and PSG.

RTÉ's coverage featured Damien Duff, who made his Irish senior debut for a team featuring McLoughlin in 1998 against the Czech Republic. He spoke of his kind-hearted nature and suggested that Irish youngsters such as his fellow pundit Richie Sadlier were inspired by McLoughlin's goal against Northern Ireland in 1993 to start playing football.

Damien Duff pays tribute to Alan McLoughlin and Alan Keely who both sadly passed away in the last two days #RTEsoccer pic.twitter.com/40RaziZwot

Alan was an absolute gentleman, a class act. We kind of overlapped - I was starting off, he was finishing off. Him and quite a few others inspired a generation. It's the reason why I played football, with his goal qualifying us for the '94 World Cup that famous night in Windsor Park. I remember it distinctly where it was. Probably why Richie plays football and many other Irish players. So, a very sad day.

Very sad day for Dermot Keely as well. I know him, he was my teacher at school, business studies, a great character. No father should bury their son. A very sad day, I send my condolences to both families.

It is with deep sadness we have heard of the passing of our former player Alan Keely, son of Dermot.

Everyone at Shelbourne sends their condolences and deepest sympathies to Dermot and family. May he rest in peace. pic.twitter.com/JLwDqs1CNe

Virgin Media were also covering the Man City v PSG game on Tuesday evening, with Brian Kerr and Damien Delaney on their punditry team. Though he said that he never knew McLoughlin personally, Kerr spoke highly of the former Ireland midfielder. He also insisted that his contribution to the Irish game should be remembered as far greater than just that goal in Belfast in 1993.

"That night. I'm getting a little bit of a shiver thinking of the tension of that game.

"Alan produced the goods and got a marvelous goal in that situation.

"But Alan McLoughlin the man shouldn't be remembered just for that goal."

Former Irish international Damien Delaney backed up Damien Duff's point on RTÉ, saying that McLoughlin's goal in Belfast was indeed the moment that made him want to pursue a career as a footballer.

"For me, as a 12-year-old boy sitting at home in Cork watching Alan McLoughlin score that goal, it helped shape my view of football.

"When you see something like that, you wanted to become a footballer."

Damien Delaney on Alan McLoughlin and that goal in Windsor Park. pic.twitter.com/JzaQhAbJgV

For me, as a 12 year old boy sitting at home in Cork watching Alan McLoughlin score that goal, it helped shape my view of football. What I wanted to be - I knew that when you see something like that, you want to be a footballer. That inspiration - and that's what it was, for me, to see that. I wasn't aware of all the Troubles that maybe Brian was or yourself at the time as a 12-year-old boy. It was just the goal, and what it did for the country and what it did for all of us. He went before us and paved the way and made me want to be a footballer, played a part in me wanting to be a footballer.

People like Alan deserve a huge amount of respect, and he'd a great career.

Alan McLoughlin will forever be remembered for Belfast in 1993, but it's clear from the comments of Tuesday night's pundits that his impact on Irish football runs far far deeper than just one goal. He will be sorely missed. 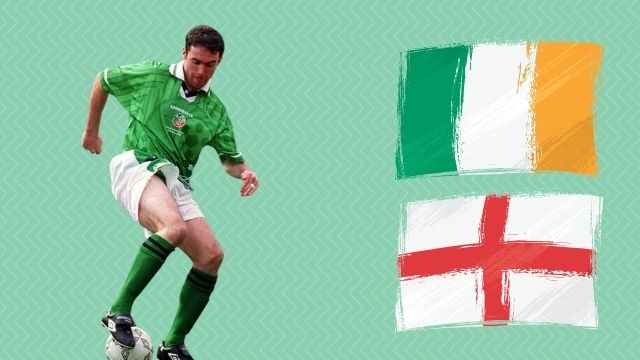 Football
43 minutes ago
By Michael McCarthy
"Just Put Scooter On, Fuck Me!" - Scott Brown's Parkhead Farewell Was Just Perfect
Football
17 hours ago
By Eoin Harrington
Richie Towell To Return To League Of Ireland With Shamrock Rovers
Football
18 hours ago
By Donny Mahoney
Celtic Lets Supporters Down With Removal Of Palestinian Flag Display
Previous Next

Football
43 minutes ago
By Michael McCarthy
"Just Put Scooter On, Fuck Me!" - Scott Brown's Parkhead Farewell Was Just Perfect
Football
17 hours ago
By Eoin Harrington
Richie Towell To Return To League Of Ireland With Shamrock Rovers
Football
18 hours ago
By Donny Mahoney
Celtic Lets Supporters Down With Removal Of Palestinian Flag Display
Popular on Balls
Rugby
23 hours ago
By Eoin Harrington
Mike Brown's 16-Year Harlequins Career Is Over After Stamping Ban Issued
Other Sports
1 day ago
By Balls Team
12 Of The Most Cringeworthy Moments In Sporting History
The Rewind
20 hours ago
By Balls Team
The 5 Best Irish Accents By Foreigners In Cinema History
The Rewind
20 hours ago
By Donny Mahoney
The Best And Worst British Media Coverage Of The Ballymurphy Verdict