Alan McLoughlin Once Did The Soundest Thing For Roy Keane

Irish football is reeling in the aftermath of the sad news on Tuesday afternoon of Alan McLoughlin's death aged 54. The midfielder, who earned 42 caps for Ireland, passed away after a battle with cancer.

Tributes aplenty have been paid to the former Swindon and Aston Villa player, who is remembered fondly for scoring the goal against Northern Ireland in 1993 that ensured Ireland would qualify for the 1994 World Cup in the USA.

That World Cup wasn't McLoughlin's first trip to the States with the Irish team, though, and an interview he did with his former club Portsmouth in 2013 reveals an amazing story from his trip with the Irish squad to compete in the US Cup in 1992.

The US Cup was an invitational competition held between the United States team and three other sides, and Ireland were invited - along with Portugal and Italy - to the very first edition in 1992. On the trip, McLoughlin struck up a friendship with a young 20-year-old from Nottingham Forest by the name of Roy Keane.

In the interview with Portsmouth, McLoughlin describes Keane's longing for a watch he spotted in a jewellery shop. The Forest midfielder couldn't afford the watch, though, and McLoughlin took it upon himself to treat his teammate.

[There was] this second-hand jeweller’s shop and he kept stopping in the shop and looking at the watch and I didn’t…I stopped him the first couple of days. So I said, what are you looking at? He said, ‘there’s a nice little Rolex there. It’s $1,200.’ I said, are you buying it? And he said, ‘I can’t afford to buy it.’

So, anyway, I left it that day. When we walked past it two days later, and we stopped again, so I felt a bit sorry for him. So I decided to…I was earning a bit more money and could afford it, so I stumped up the agreement that I would buy the watch and he would pay me when he came for the next five Irish trips. He would pay me the money. So I bought him the watch.

It's a lovely story, and is a reflection of the gentleman McLoughlin is widely remembered as being. It does have a rather hilarious ending though - the Irish team hotel was robbed that very night and with the stolen goods went Keane's new watch.

Thankfully, Keane managed to snag a move to Alex Ferguson's Manchester United the following year, and it wasn't exactly a monetary issue to repay his Irish teammate.

This story is just one of many heartwarming tales being shared this evening in memory of Alan McLoughlin, a player and man who will be sorely missed by all in Irish football.

SEE ALSO: "The Proudest Moment In My Career" - Alan McLoughlin's Windsor Park Moment Was Highlight Of A Wonderful Legacy 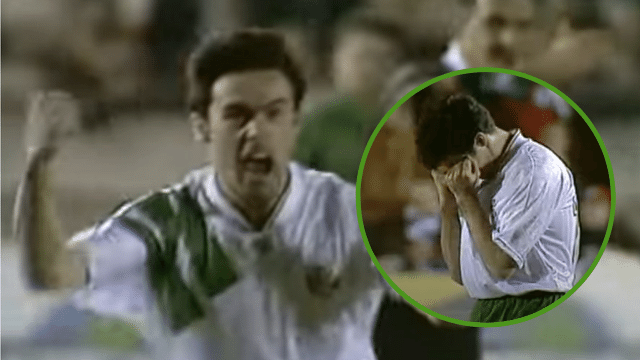