Football
May 4, 2021
By Michael McCarthy

"If he never scores another goal in an Irish shirt, Alan McLoughlin will be a hero for the rest of his life".

The words of George Hamilton from November 17th, 1993 ring as true today as they did then, but today we look on them with more than a touch of sadness. It was confirmed today that Alan McLoughlin has died after a long and difficult illness, aged just 54. He's the first member of Ireland's 1990 and 1994 World Cup squads to pass away.

He'll always be known for that goal - the goal that got Ireland to USA '94 - and it's not bad footballing legacy to leave. His career was so much more than one sweet strike though.

He played in two World Cups for Ireland as part of his 42 caps for his country. In 1996, he was named the FAI Senior International Player of the Year. At club level, McLoughlin is best remembered for his time at Swindon and Portsmouth. At Swindon, under Ossie Ardiles, McLoughlin scored the winner in the 1990 Playoff final which should have promoted the club to the top division of English football for the first time.

Unfortunately, Swindon were done for making illegal payments to players and were demoted before they ever made it to Division 1. McLoughlin moved on and eventually ended up at Portsmouth, with whom he played over 300 games, scoring in an FA Cup quarter final in 1992, and taking them to another playoff final.

All that will pale in comparison to how he'll be remembered in Ireland though. In a video recorded by the FAI with McLoughlin ahead of Ireland's game with Wales in 2017, the midfielder talked about his call-up to play for Ireland. Incredibly, he was called up for the same "B" international for both England and Ireland, who were playing each other. "It was a no-brainer, right from that moment."

A few months later, he was in the first ever Ireland World Cup squad as a 23-year-old. He made two apperances off the bench during Italia '90. It was over three years later though when he mark on Irish sporting history was made.

Coming off the bench in Windsor Park against Northern Ireland, McLoughlin scored his first ever goal for Ireland in the final 15 minutes to earn a 1-1 draw. Combined with Spain's win over Denmark in Seville, the goal sent Ireland to their second World Cup. It will go down as one of the most famous moments in Irish football history.

In the 2017 FAI video above, McLoughlin spoke about that fateful November night in Belfast.

I knew I had to go on and make some sort of impact into the game.

I remember watching Denis [Irwin] about to take a free-kick, and I was on the edge of the box by myself.

At that moment everything zoned in for me. I knew when I hit it, it was a goal, and I knew the goalkeeper had no chance.

A abiding memory of that night, outside of McLoughlin's goal and celebration, is the post match image on the pitch at Windsor Park when Packie Bonner wrapped McLoughlin in a bear hug, repeatedly and emotionally saying just, "thanks!" Jack Charlton said jokingly in the press conference after the game that is justified "his existence for the last two years."

It's a night that will never be forgotten. Alan McLoughlin was a hero for the rest of his life, George, and he'll be a hero long after that. 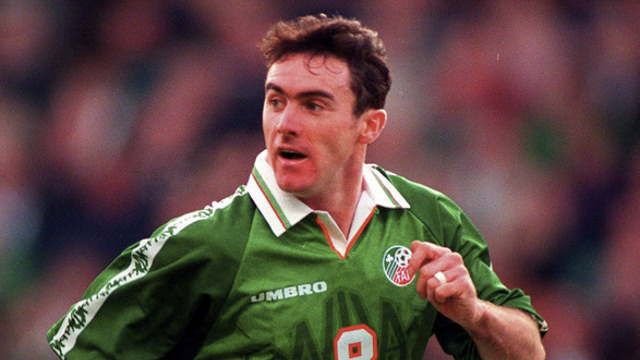