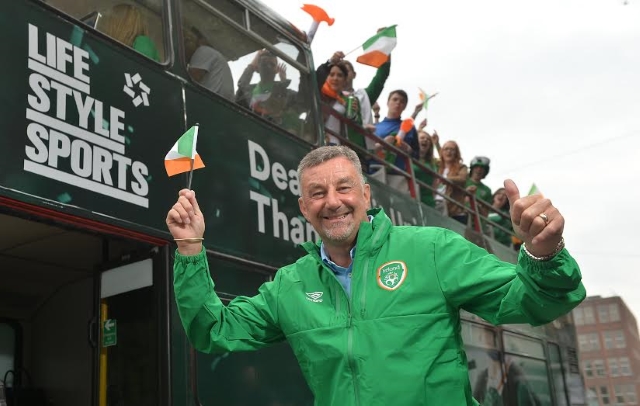 Four of the players in Martin O'Neill's 23-man squad for Euro 2016 are likely to be strikers.

Two of the probabilities to travel are Robbie Keane and Daryl Murphy. Both of those are players with whom John Aldridge can empathise.

Heading to USA '94, Aldridge was the same age Robbie Keane is now. He also had a similar role in the team - the option off the bench when a goal was required.

Robbie is in the same sort of situation now with his age as I was. He knows the score with his experience and the value he brings to the squad and for me he is still vital. so vital. People can talk about playing in the USA and whatever, but he knows what it's all about and what it takes. He is sharp in his mind. What he has lost in his legs over the years he has gained in his mind and he'll see things earlier than when he was younger and just full of pace.

After 20 caps, Daryl Murphy is yet to score in international football. His situation is remarkably similar to the former Liverpool player. Aldridge's first Ireland goal did not arrive until 20 games into his Ireland career in a friendly against Tunisia at Lansdowne Road.

I couldn't score for 19 or 20 bloody games and it really got to me. When you get a goal of that stature it really lifts you as a player and you start to believe in yourself a lot more. Because strikers do question their ability at times. Every game you go in after that you feel confident that if any chance falls your way, you'll stick it away.

It was a drought which 69-cap international says drove him nuts.

Bloody right, it really did as I never went more than five games or so without a goal at club level and all of a sudden I was doubting my own ability. I knew I was doing right by the team within our system and the way Jack played. It didn't help me sleep but the only thing that got me going was that we were a force and no one could beat us and we had a really good team. What I done was very important for the team but personally it really got to me and really hurt me if I'm honest.

Given his experience with similar circumstances, Aldridge has some advice for Murphy.

The first one is always the most important, take it from me. You do question yourself and sometimes the goal starts to look a little bit smaller and the goalkeeper starts to look a little bit bigger. You just need a slice of luck with the first one and then it opens up. The most important thing is to keep trying to get into those goal situations and keep on getting in there and dont start doubting your ability.

He [Murphy] just has to keep getting in the positions, keep running and getting your foot through the ball and it will come. It's only a question of time. The more chances you get, the more likely it is he will score.

Pictured is a group of lucky Irish supporters, with Irish footballing legend John Aldridge, on the Life Style Sports Open Top Supporters Bus, with thanks to Umbro.

Football
4 months ago
By Michael McCarthy
The Tribute Song To John Aldridge And The Man In The Yellow Hat Is Incredible
Football
2 years ago
By Maurice Brosnan
What English Fans Did While Ireland Were Contesting World Cup '94
Football
3 years ago
By Eoin Lyons
John Aldridge Lays Into 'Cheat' Neymar Following World Cup Exit
Popular on Balls
Football
9 hours ago
By Eoin Harrington
John O'Shea Explains How He Ended Up In Goal For Manchester United In 2007
GAA
15 hours ago
By PJ Browne
Three Live Club Football And Hurling Games On TV This Weekend
GAA
11 hours ago
By PJ Browne
Incredible Penalty Halts Premature Celebrations In Galway
GAA
12 hours ago
By Maurice Brosnan
'Bad Coaching. I Think That Is A Big Problem In The GAA'